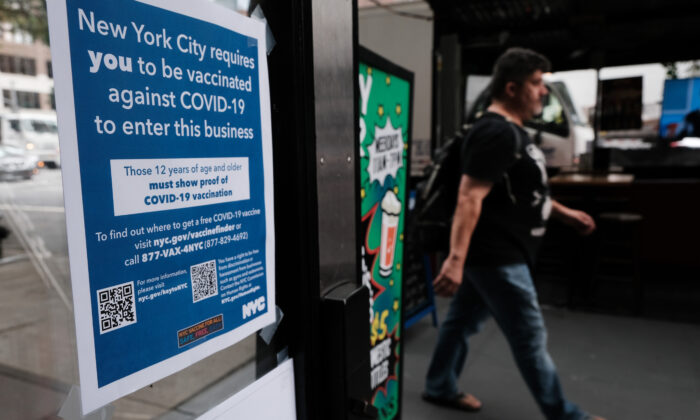 A sign in a restaurant window informs customers that they will need to show proof that they have gotten a COVID-19 vaccine to be allowed inside, in New York City on Aug. 20, 2021. (Spencer Platt/Getty Images)
NY News

The city managed to inspect nearly two-thirds of the estimated 31,000 businesses that are required to ask their employees and customers for proof of vaccination. Some 8,000 were issued a warning for noncompliance. Of those, more than 3,300 for infractions that would have led to violations which could be penalized with a fine of $1,000 for the first and going up to $5,000 for the third. Upon second inspection at least two weeks later, only 21 establishments were issued violations, according to Jeff Dupee, City Hall’s senior adviser managing the mandate.

Though the mandate allows fines for the first violation, the city has been issuing warnings first “as a matter of policy,” Dupee said, testifying to the City Council’s small business committee on Oct. 29.

The mandate went into effect on Sept. 13. Customers are required to show vaccination cards and a matching ID or digital vaccination passports if they want to use the establishment for more than a quick, 10-minute visit. The businesses also need to display a sign announcing the mandate as well as written plan for implementing the mandate.

Almost 77 percent of the targeted restaurants reported worse business as a result of the mandate, according to a survey by the New York State Restaurant Association. Nearly 58 reported “much worse” business, the association’s Kathleen Reilly testified during the hearing.

At least hundreds of businesses have reached out to the committee chair, Councilman Mark Gjonaj, with complaints and concerns regarding the mandate, he told The Epoch Times after the hearing.

Dupee suggested that the city is in fact helping the businesses by informing them about how to comply with the mandate as well as helping them create an environment where customers anxious about the disease would be more comfortable.

“I’ve never heard anything so absurd,” he told Dupee and Jonnel Doris, commissioner of the city’s small business services department, during the hearing.

He said targeting these particular businesses, most of them small and already battered by the pandemic and related restrictions, is “an unfair burden.”

The city is “in essence, picking winners and losers” and “poor neighborhoods are paying the price,” he said.

Doris and Dupee stressed that since Mayor Bill de Blasio announced the mandate on Aug. 3, more than 800,000 New Yorkers got the vaccine, proving that the mandate works.

But the city’s vaccination data doesn’t appear to spare the mandate much credit.

At the peak of the vaccine uptake in March and April, over 300,000 people a week were getting the first dose. The interest then dropped to a low of less than 50,000 a week in early July, and then started to pick up again, weeks before the mandate was announced.

It’s true that in the week after the announcement as well as around the time the mandate went into effect, the numbers bumped above 100,000 a week. But those gains have long worn off. Last week, only about 43,000 people got the first dose, the least since December, when the vaccinations only just started.

Meanwhile, 27 percent of New Yorkers remain unvaccinated, including nearly a million adults. All those people, as well as unvaccinated visitors and commuters from outside the city, are excluded from the customer base for the businesses singled out for enforcing the mandate, Gjonaj noted.

He questioned why these particular businesses were targeted, while the beauty salons, grocery stores, for example, weren’t.

Dupee said the city consulted “health experts” on that decision, but Gjonaj wouldn’t have it.

Whatever the experts had to say, “you interpreted that,” he told the officials.

It didn’t escape him that large corporate chain stores and supermarkets would have been more likely to be able to absorb the cost of enforcing the mandate. But those have been spared the burden.

Moreover, the City Hall has been silent on how long the mandate is supposed to stay in place or what threshold needs to be reached for it to get scrapped, which prevents businesses to plan accordingly, he noted.

“We have lost our minds folks,” Gjonaj summed up.