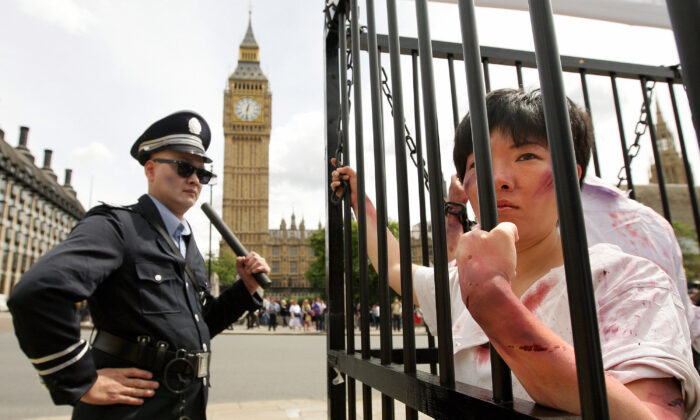 An actor dressed as a Chinese policeman stands guard over a cage containing actors playing the role of Falun Gong practitioners during a demonstration outside of London's Houses of Parliament on July 20, 2009. (Shaun Curry/AFP via Getty Images)
Religious Freedom

NEW YORK—On Liu Danbi’s 31st birthday in December 2021—the first without a birthday wish from her mother—she didn’t cry. Her tears had run out long ago, she said.

Liu hadn’t seen her mother face to face since they said goodbye at a Chinese airport seven years ago, when she boarded a flight for New York for her graduate studies at the University at Buffalo.

When they parted, Liu was seized by a sudden grief and dissolved into tears for seemingly no reason.

“I had a hunch it was the final farewell to my mother,” she told The Epoch Times.

Her mother, Huang Shiqun, died on April 23, 2021, after swallowing seven bottles of pills that were prescribed by a psychiatric hospital. Her body was discovered in a hidden stairwell of the apartment building where she lived with her husband.

Huang left a final message for her husband, written on a slip of paper.

“You are the best husband in the world,” she wrote. “I’m just not lucky enough.”

Before her death at age 58, Huang had struggled for three years with depression, which began sometime during her arrest and subsequent detention in her hometown of Wuhan, China, for trying to call attention to the Chinese regime’s persecution of her beliefs.

Huang, formerly a kindergarten teacher, was an adherent of Falun Gong, a spiritual discipline with five meditative exercises and moral teachings centered on the principles of truthfulness, compassion, and forbearance.

Official reports estimated that roughly 70 million people were practicing the discipline in China in 1999. But fearing its popularity, the regime started a violent campaign to persecute Falun Gong, leading to the arrest of millions of adherents over the past 22 years.

In Liu’s memory, her mother was always talkative and optimistic. Huang struck up conversations with strangers on the street and made friends with fruit vendors in her neighborhood. She had a good voice and a talent for impersonating Teresa Teng, a Taiwanese pop icon in the 1980s who won fans from all over Asia with her heartrending romantic ballads.

Huang strove to be a good teacher as well. Parents would sometimes bring her money and gifts in the hopes that she would treat their kids better, but she would turn them all down.

“I’m just trying to be a good person by following truthfulness, compassion, and tolerance,” Huang would tell them.

Teaching was her job, she would say, and she had an obligation to do it well.

“It was as if nothing was too difficult for her,” Liu said. “Her mere presence would make me feel safe.”

But those traits disappeared after she came back from Wuhan’s Qiaokou District Legal Education Center in February 2018. The facility is known by Falun Gong adherents to be a brainwashing center for its efforts to make practitioners of the faith give up their beliefs through a combination of propaganda, coercion, and forced medication.

Liu never knew what happened to her mother during her one month of detention at the center. But when Huang came back, she was no longer herself. Her weight had plummeted by 33 pounds. She was restless at night and would pace back and forth. She suffered from vision and hearing loss. She couldn’t read and would get lost even around her own neighborhood. During calls with Liu, Huang spoke of hair loss on her arms and muscle cramps.

More worrisome were the changes to her mental state. Once a lighthearted person, Huang became anxious and withdrawn. She had curtains drawn even in the daytime, saying that she was afraid of the light. Any visitors would distress her, and she no longer wanted to go outside.

The hospital told the family that Huang’s cranial nerves had degenerated.

“She told me she felt like every cell in her body was being tortured,” Liu said. “I felt that she was ready to jump off the building at any minute and give up her life.”

Most of the time, Huang would lie in bed, “suffering and trying to get by,” Liu said.

Huang spoke often to Liu about her physical and psychological pains, but both of them were cautious about discussing the cause, as they knew their phone conversations were likely wiretapped. Liu suspected the guards put psychiatric drugs in her mother’s food during Huang’s detention.

She came to this conclusion after reading reports online about the detention center and about Falun Gong adherents who have exhibited similar symptoms after being drugged. Some adherents detained at the center have said that their meals had a taste of medicine to them, according to Minghui, a U.S.-based website that tracks the persecution of Falun Gong practitioners.

Xiao Yingxue, a former employee at the Qiaokou District Industrial and Commercial Bureau, was injected with three doses of unknown substances at the same center in 2011 and complained of severe headaches for several years afterward. Wang Yujie, 24, vomited white foam after being injected with unknown drugs on her shoulder at the provincial brainwashing center in Hubei Province, China. She lost her hearing and vision and died in September 2011, four months after her release, according to Minghui.

Liu was only able to learn about her mother’s time in detention from messages written by Huang on pieces of paper and held up for her during a video call, which Liu would take a picture of to read later. Huang used this method of silent communication to avoid being detected by potential eavesdroppers.

In those notes, Huang wrote about unrelenting torment: how she was forced to sit in a “classroom” with two layers of metal doors for 15 hours daily, where recordings and videos smearing Falun Gong were played on high volume; how inmates, with orders from the guards, forbade her from sleeping and shoved her if she slightly closed her eyes. The guards gave her little food. On the fifth day, Huang’s body began to shake uncontrollably. She had stood firm when the guards asked her to sign documents renouncing her belief, but on that day, she yielded.

“She didn’t know what it was, but felt she couldn’t control herself,” Liu said.

Huang was repeatedly made to write “homework” to smear and “express hatred” toward her beliefs until it would satisfy the guards.

Police hadn’t left Huang alone even after her release. In 2021, they asked her to sign another document renouncing her faith. The measure was part of a nationwide “Zero Out” campaign aimed at eliminating the Falun Gong adherents in the local area.

Accepting the loss of Huang was difficult for Liu’s father, who had also been living on high alert day and night trying to keep Huang safe. Liu’s cousin told her that she had never seen him cry like that.

“He never prepared himself for that day,” Liu said.

Even now, he can sleep only two or three hours, even with the help of sleeping pills, according to Liu.

Just recently, Liu’s father called her on the phone. He was drunk.

“He told me he doesn’t know how he can continue living,” she said.

Sarah Lu contributed to this report.