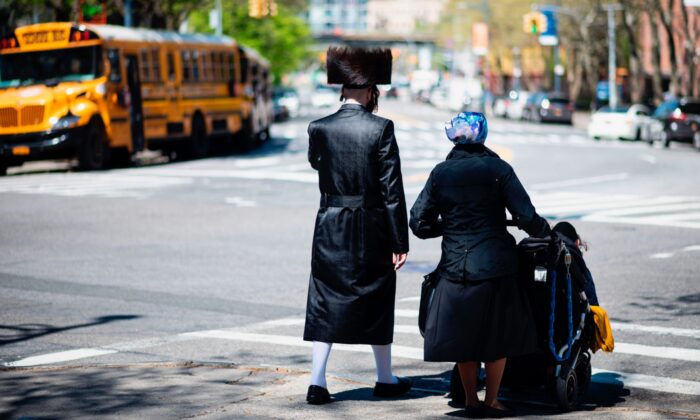 A Jewish family crosses a street in a Jewish quarter in Williamsburg Brooklyn in New York City on April 24, 2019. (Johannes Eisele/AFP via Getty Images)
NY Politics

The U.S. Supreme Court has rejected an appeal from parents who sought to challenge New York lawmakers’ decision that eliminated religious exemptions to vaccine requirements for schoolchildren.

On Monday, the nation’s high court released an order (pdf) announcing their decision not to hear arguments in the case F.F., as Parent of Y.F. v. New York, which centers on a lawsuit challenging a 2019 law repealing religious exemptions for vaccines.

The rejection of the appeal lets stand a lower court decision that concluded that the parents’ arguments lacked merit, the Christian Post reported.

A group of 55 families filed a lawsuit in July 2019 asking the New York State Supreme Court to stop the statewide repeal of the religious exemption to vaccines.

The lawsuit came after then-Gov. Andrew Cuomo signed into law a bill on June 13, 2019, that repealed the personal belief vaccine exemptions for children. The Democratic governor signed the measure minutes after the final vote amid a measles outbreak that impacted dozens of states.

“The science is crystal clear: Vaccines are safe, effective and the best way to keep our children safe,” Cuomo said at the time after signing the bill. “While I understand and respect freedom of religion, our first job is to protect public health.”

While the measure left medical exemptions in place, the law no longer allows exemptions for students whose parents or guardians hold genuine religious beliefs that do not permit the child to receive vaccinations.

The state law only applies to students under 18 in both public and private schools and doesn’t require students older than 18 or any other adult in the school environment to be vaccinated. With the repeal enacted, unvaccinated children may not attend school or daycare in the state.

The group of families—including those from the Jewish, Christian, and Muslim faiths—argue that the repeal of the exemption violated their First Amendment rights, exhibited hostility toward religion, and breached protections under the Constitution’s Equal Protection Clause, among other issues. The families contended that the policy forced them to either violate their beliefs or homeschool their children.

“In lobbying for its passage, numerous legislators publicly mocked and ridiculed those seeking religious exemptions for their children, and the legislature left intact a medical exemption,” the parents’ appeal to the U.S. Supreme Court reads (pdf).

“There is no dispute the repeal has put tens of thousands of students to the Hobson’s choice of violating their sincerely-held religious beliefs or being denied the right to attend any manner of in-person schooling.”

In March 2021, the Appellate Division of the Supreme Court of New York’s Third Department upheld a similar decision as Acting Albany County Supreme Court Justice Denise Hartman in August 2019, who denied the families a preliminary injunction. Officials concluded that the repeal was “motivated by a prescient for public health” and was not about “active hostility towards religion.”

The only other states that prohibit K-12 schools from granting exemptions on religious grounds are California, Mississippi, West Virginia, Connecticut, and Maine, according to the National Conference of State Legislatures. New York first required schoolchildren to be vaccinated in 1860.

California removed personal belief vaccine exemptions for children in both public and private schools in 2015, after a measles outbreak at Disneyland sickened 147 people and spread across the United States and into Canada.