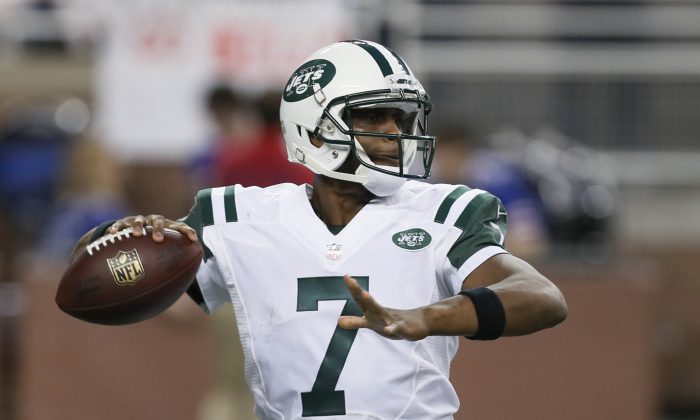 New York Jets quarterback Geno Smith (7) throws against the Buffalo Bills during the second half of an NFL football game in Detroit, Monday, Nov. 24, 2014. Smith is getting another shot as the New York Jets' starting quarterback. The team announced Wednesday, Nov. 26, 2014 that Smith, benched the last three games in favor of Michael Vick, will be under center against the Miami Dolphins on Monday night. (AP Photo/Paul Sancya)
NFL

After losing to the Vikings last week, the New York Jets will play the Titans in Tennessee. Here’s some of the latest updates:

QB Geno Smith recently attempted to clarify a comment he made about being a “Pro Bowl-caliber quarterback.”

Smith, who has had a dreadful season, told AP: ”Yeah, a little bit, but I can’t worry about it. I’m just going out there and do what I have to do to win the game. I can’t make any decisions on anything other than that. So yeah, I just focus on doing my job.”

Smith then talked about his “Pro Bowl” comments.

”Yeah, a little bit, but I can’t worry about it,” Smith said on Wednesday. ”I’m just going out there and do what I have to do to win the game. I can’t make any decisions on anything other than that. So yeah, I just focus on doing my job.”

“We’ve all got to do better,” Mornhinweg said, according to ESPN. “We all have to play better and we have to coach better. We’ll leave it at that.”

According to TMZ, Vick and rapper Bow Wow got involved with the WaveMasterz product line. Vick purchased 40 percent of the company.

“And the investment is paying off in a big way … with WaveMasterz telling us the company is shipping out more than 500,000 brushes this holiday season to keep up with demand,” said TMZ. Last year, the company shipped about 3,000.

Vick told the site: “I love the WaveMasterz brush … it’s why I wanted to do more than endorse the brush, but be a part of this company. Now, we have to make sure the production keeps up with the demand because the response, even as we launch has been amazing.

WR Eric Decker, who played in a Super Bowl last season with the Broncos, said the Jets are a few pieces away from being a playoff contender.

Decker told CBS NY: “I mean, honestly, going from a good team or an average team or the record we’re at now, it’s very small.”

But he stipulated that the Jets are “very close.”

“One draft pick isn’t going to change things,” Pace told the NY Daily News. “If you end up with a high draft pick, that guy still has to get seasoned and become a pro. Very few times you see guys come in and change a franchise with one guy.”

ESPN’s Mel Kiper also said that Mariota or Winston probably won’t be franchise quarterbacks when they get to the NFL.

“One of those two is going to be, I would think, a New York Jet,” Kiper added.