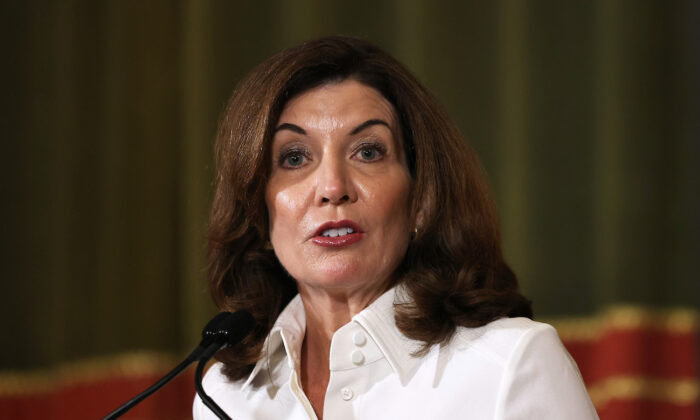 A lawyer for 17 doctors, nurses, and other medical professionals who object on religious grounds to New York’s tough vaccine mandate for health care workers filed an emergency application with the U.S. Supreme Court late on Nov. 12, claiming the state’s governor is waging “a veritable religious crusade to force medical professionals to be vaccinated.”

The application is pending before a Supreme Court that has been reluctant to block mandates requiring people to accept vaccinations aimed at the CCP virus, which causes the disease COVID-19, but has been willing to curtail pandemic-related restrictions when religious freedoms have been threatened.

In New York, for example, a year ago, on a 5–4 vote, the high court blocked then-Gov. Andrew Cuomo from enforcing restrictions on attendance at houses of worship, as The Epoch Times previously reported.

All 17 applicants—16 Catholics and 1 Baptist—have sincere religious objections to the vaccines because they come from “abortion-derived [human] fetal cell lines in testing, development, or production,” according to the application. “Neither the Respondents nor the courts have questioned Applicants’ sincerity or religiosity.”

The application in the case, known as Dr. A v. Hochul, court file 21A145, was filed against respondent Kathy Hochul, New York’s Democratic governor, who is being sued in her official capacity alongside two other state officials. The application was directed to Justice Sonia Sotomayor, who ordered Hochul to file a response by Nov. 16 at 4 p.m.

Hochul previously injected religion into the public debate over COVID-19, denouncing the unvaccinated and accusing them of defying the will of God.

“There’s people out there who aren’t listening to God, what God wants, you know this, you know who they are,” the governor told an audience Sept. 26 at New York City’s Christian Cultural Center, adding that those who have been vaccinated are “the smart ones.”

“I need you to be my apostles,” Hochul said.

“I need you to go out and talk about it and say, we all owe this to each other. We love each other. Jesus taught us to love one another. And how do you show that love, but to care about each other enough to say, please get vaccinated because I love you. I want you to live. I want our kids to be safe when they’re in schools, I want you to be safe.”

Previously, a federal district court “rightly held” that “New York’s extraordinarily punitive COVID vaccine mandate,” which offers medical exemptions but not religious exemptions, is “not a neutral law, but a religious gerrymander that targets religious opposition” to the available vaccines, said Thomas Brejcha, counsel of record and president of the Thomas More Society, a public interest law firm, in a statement.

The Thomas More Society is working on the case with attorneys from another public interest law firm, the Becket Fund for Religious Liberty.

Thomas More Society Special Counsel Christopher A. Ferrara, lead counsel in the district court proceeding, said in a statement: “Two doctors working in the same hospital, with the same patients, are treated differently based on nothing but the religious motivation of the one seeking a religious exemption versus the one seeking a medical exemption.

“The unprecedented First Amendment violation could not be more apparent.”

Also unprecedented are “outrageous statements” by Hochul, “who is conducting a veritable religious crusade to force medical professionals to be vaccinated. She had the audacity to declare that those who decline to be vaccinated ‘aren’t listening to God and what God wants’ and that ‘everybody from the Pope on down is encouraging people to get vaccinated.’”

“In other words, doctors and nurses will be fired if they dissent from Hochul’s religious view on vaccination,” Ferrara said.

According to the application, New York’s discriminatory mandate makes it “a national outlier.”

Last month, the health care workers won a stay against the mandate from the district court, but the U.S. Court of Appeals for the 2nd Circuit overturned the lower court order, leading to the Nov. 12 appeal to the Supreme Court.

The Epoch Times reached out for comment to New York Solicitor General Barbara Underwood over the weekend but didn’t receive a reply by press time.