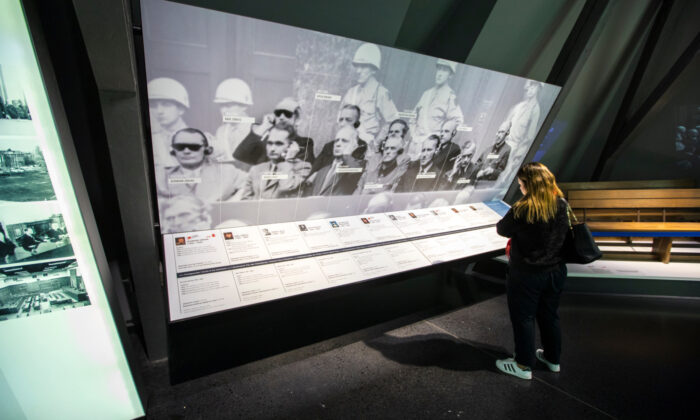 A visitor watches the exhibition at the Memorial to the Nuremberg Trials in Nuremberg, Germany, on Oct. 23, 2019. (chrisdorney/Shutterstock)
Viewpoints

In the 1930s, German medicine and German health care institutions were widely considered the most advanced in the world. However, subtle but enormously consequential shifts had been underway decades before Adolf Hitler came to power, starting with the rise of the eugenics movement in the late 19th and early 20th centuries.

In 1922, Alfred Hoche and Karl Binding, a psychiatrist and a lawyer, published an influential book, “Allowing the Destruction of Life Unworthy of Life.” A metaphor from this and other influential works captured the imagination of the German medical establishment, undermining the traditional Hippocratic ethic that had governed medicine since antiquity.

Instead of serving the health of the individual patient presenting for treatment, German physicians were encouraged to be responsible for the “health” of the “social organism”—the volk—as a whole.

Instead of seeing afflicted individuals as sick and in need of compassionate medical care, German doctors became agents of a socio-political program driven by a cold and calculating utilitarian ethos. If the social organism was construed as healthy or sick, some individuals (e.g., those with cognitive or physical disabilities) were characterized as “cancers” on the volk. And what do doctors do with cancers but eliminate them?

The first people gassed by the Nazis weren’t Jews in concentration camps (that came later), but disabled patients in psychiatric hospitals, murdered under the Third Reich’s “T4 Euthanasia Program.” Each of these death warrants was signed by a German physician. Even after the lethal regime turned its attention to Jews and other ethnic minorities, they continued to deploy quasi-public health justifications: Recall that the Jews were routinely demonized by the Nazis as “spreaders of disease.”

If physicians serve not the needs of sick and vulnerable patients, but are agents of a social program, the German example shows us what happens when that social program is misdirected by a corrupt regime.

When the atrocities of the Nazi doctors were revealed at the postwar Nuremberg trials, the world rightly condemned the German physicians and scientists who participated. That their actions were legal under the Nazi regime wasn’t an adequate defense; these doctors were convicted at Nuremberg for crimes against humanity. To avoid such disasters in the future, the central principle of research ethics and medical ethics—namely, the free and informed consent of the research subject or patient—was then clearly articulated in the Nuremberg Code. Here is the first of 10 points articulated in the Code:

“The voluntary consent of the human subject is absolutely essential. This means that the person involved should have legal capacity to give consent; should be so situated as to be able to exercise free power of choice, without the intervention of any element of force, fraud, deceit, duress, overreaching, or other ulterior form of constraint or coercion; and should have sufficient knowledge and comprehension of the elements of the subject matter involved as to enable him to make an understanding and enlightened decision. This latter element requires that before the acceptance of an affirmative decision by the experimental subject, there should be made known to him the nature, duration, and purpose of the experiment; the method and means by which it is to be conducted; all inconveniences and hazards reasonably to be expected; and the effects upon his health or person which may possibly come from his participation in the experiment.”

This principle was further developed in the Helsinki Declaration of the World Medical Association, the Belmont Report commissioned by the U.S. government in the 1970s, and subsequently codified under the U.S. Code of Federal Regulations in the “Common Rule,” the law governing human-subjects research in the United States.

Fast forward to 2020. In the face of the novel coronavirus, and the fears generated by media propaganda, the principle of free and informed consent was once again abandoned. The most egregious but by no means the only example was vaccine mandates enacted while the vaccines were still under emergency-use authorization, and thus by our federal government’s own definition, “experimental.”

How and why was the bulwark of 20th-century medical ethics abandoned so quickly, and with so little opposition from the medical and scientific establishment? What were the immediate effects? What will be the long-term consequences of the shift back to a crass utilitarian ethic governing science, medicine, and public health during a pandemic?