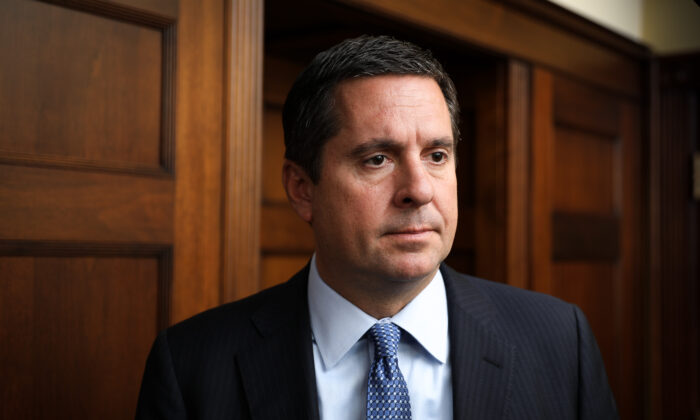 Nunes: Sussmann Case Revealed ‘So Much’ About Clinton, FBI

“This was a really important case that got brought in D.C.—even with the verdict—because we learned so much,” Nunes, now the head of Trump’s social media company, told NTD—part of the Epoch Media Group—hours after Sussmann was acquitted.

Robby Mook, Clinton’s campaign manager, testified during the trial that Clinton approved the plan to promote the Trump–Russia allegations to media outlets. Mook said he wasn’t sure whether Clinton approved of Sussmann taking the same information to the FBI.

Also during the trial, it was revealed that then-FBI Director James Comey and other bureau leaders were “fired up” about the allegations, which concerned a purported secret backchannel between the Trump Organization and Russia’s Alfa Bank. Senior FBI officials pressured lower-level workers to investigate the claims, even though cyber experts within a day deemed them unsupported.

Former FBI agent and federal prosecutor Marc Ruskin told NTD, that the evidence presented during the trial “will have ramifications in the future,” including Mook’s disclosures and internal FBI emails.

“Regardless of the political implications, there is a lot more knowledge, you could say, more evidence now that the public is aware of that they would not be aware of had this trial not taken place,” Ruskin said. “The evidence is now out there. And I think it’s up to the uninformed public to read it, digest it, and evaluate it and make their own determinations as to its value.”

Durham was tasked during the Trump administration to investigate the origins of the U.S. government’s widespread effort to investigate links between Trump and Russia. The effort was partially based on allegations funded by Clinton’s campaign.

Sussmann’s was the first trial stemming from the investigation. Sussmann was acquitted on May 31 on one count of lying to the FBI. He had told FBI lawyer James Baker he was bringing the Trump–Russia claims on his own accord, but later acknowledged under oath he was acting on behalf of a client.

Durham earlier secured a guilty plea from FBI lawyer Kevin Clinesmith, who admitted to doctoring an email from the CIA to say that former Trump campaign associate Carter Page was not a CIA asset, when, in fact, he was. Durham has also charged Igor Danchenko, a primary source for the anti-Trump dossier compiled by ex-British spy Christopher Steele, who was paid by Fusion GPS, a firm contracted by the campaign to conduct opposition research.

Sussmann was tried in Washington. Danchenko will go on trial later this year in Virginia.

Nunes, who unearthed much of the early evidence of wrongdoing by the government in its probe of the Trump campaign, said that Durham “presented so much evidence—overwhelming evidence—in the Sussmann trial that I’d be shocked if Durham doesn’t bring several more indictments, or possibly even a conspiracy indictment.”