Nuclear War With China or Russia ‘A Very Real Possibility,’ US Admiral Warns 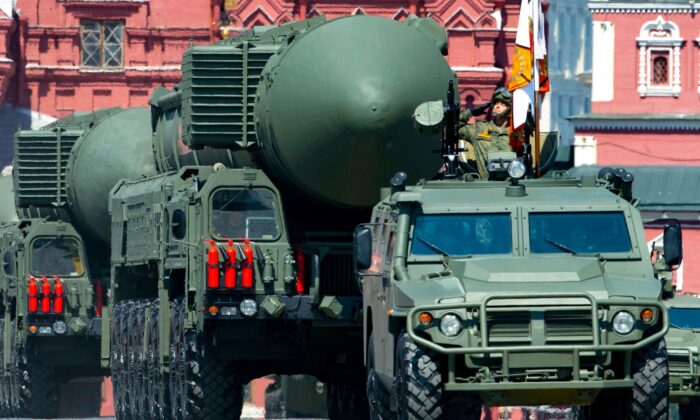 The United States must be ready for a nuclear war with Russia and China while seeking methods to curb their use of strategic weapons, said the commander of the U.S. Strategic Command—the department that manages the U.S. integrated missile defense and other systems.

Adm. Charles Richard wrote that there is a “real possibility” for a regional crisis with China or Russia that “could escalate quickly to a conflict involving nuclear weapons, if they perceived a conventional loss would threaten the regime or state.

“Consequently, the U.S. military must shift its principal assumption from ‘nuclear employment is not possible’ to ‘nuclear employment is a very real possibility,’ and act to meet and deter that reality,” he wrote for the U.S. Naval Institute’s February journal. “We cannot approach nuclear deterrence the same way. It must be tailored and evolved for the dynamic environment we face.”

Richard said the department should “establish unity” to deal with “Russian and Chinese aggression, while understanding they require different deterrence approaches, and incorporating that thinking into professional military education at the earliest opportunity.”

Moscow and Beijing in recent years have invested in nuclear capabilities designed to constrain and counter the United States and even “escalate past us,” Richard added.

“Until we, as a [Defense] Department, come to understand, if not accept, what we are facing and what should be done about it, we run the risk of developing plans we cannot execute and procuring capabilities that will not deliver desired outcomes,” Richard argued. “In the absence of change, we are on the path, once again, to prepare for the conflict we prefer, instead of one we are likely to face.”

Speaking to the Washington Times, Richard said both Russia and China could become “two nuclear-capable peers by the end of this decade,” which he described as unprecedented.

“We’ve assumed strategic deterrence will hold in the future, but as the threat environment changes, this may not be the case,” he added. “We need to be ready to respond to cross-domain threats to ensure the security of our nation and allies by thinking holistically about strategic deterrence in the 21st century.”

Former President Donald Trump had sought to not renew the pact, saying that Russia didn’t adhere to the pact.