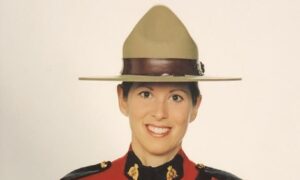 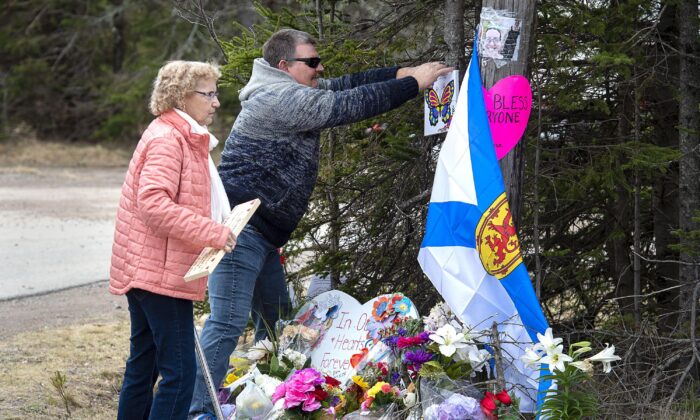 People pay their respects at a memorial in Portapique on April 22, 2020, after alleged killer Gabriel Wortman went on a murder rampage in Portapique and several other Nova Scotia communities. (The Canadian Press/Andrew Vaughan)
Canada

Nova Scotia Killer and the Possible Deeper Reasons Behind His Rampage

As more is learned about the man responsible for Canada’s worst mass killing, a troubling picture is emerging of 51-year-old Gabriel Wortman. The gunman’s extensive killing spree in Nova Scotia ended on April 19 at a rural gas station after a shootout with police in which he was mortally wounded.

Many innocent lives were lost in the tragedy, including 23-year veteran of the RCMP Heide Stevenson. The police put the number of victims at 22 at the time of writing, but the toll may increase as police sift through the charred remains of buildings set on fire in Wortman’s rampage.

Each victim leaves behind family and friends whose hardship is compounded by not being able to adequately grieve their loss because of the social distancing limitations due to the pandemic.

More details about the killer and his motive may emerge in the coming days, but the shock and dismay over why our society is witness to such senseless acts of killing will linger much longer.

According to news reports, Wortman was a successful denturist who owned multiple properties including a large log cabin in Portapique. Originally from Riverview, New Brunswick, Wortman was featured in a 2014 television report for his generosity after providing a denture set to a woman who lost her teeth during cancer treatment.

However, there was another side to him, including a guilty plea for a 2001 assault charge, an alleged drinking problem, and an apparent obsession with RCMP police gear, including a police cruiser he purchased at auction and used in his rampage.

Authorities say when Wortman began his carnage late on April 18 he was wearing an RCMP uniform and driving a mock-up of an RCMP cruiser. Among the people he targeted was his girlfriend, who survived the assault.

An only child, Wortman was raised by his mother after his parents divorced. A 1986 high school yearbook inscription under his graduation photo noted, “Gabe’s future might include being an RCMP officer,” while a junior high school friend recalled his obsession with air rifles, the National Post reports.

Details are still scarce on Wortman and his motives aren’t yet known, but some common threads with other mass killers can be found.

“Whether they were Adam Lanza who committed the Sandy Hook killings, Elliot Rodger at UC Santa Barbara, Dylann Roof in Charleston, Nikolas Cruz in Parkland, Stephen Paddock in Las Vegas, and on and on, they were all dad-deprived kids,” Warren Farrell, an American academic and author of “The Boy Crisis,” said in an interview.

Farrell, head of a White House commission to create a Council on Boys and Men during the Obama administration, says Wortman fits the same profile.

“[Mass shooters] are almost always males as opposed to females, and they’re usually white, and there is dad-deprivation, which of course Gabriel Wortman’s father was absent for most of his life. He fits that category.”

Mark Lepine, the man who killed 14 women at École Polytechnique in Montreal in 1989, also came from a broken home; his father, Rachid Gharbi, left the family when Lepine was just seven.

Farrell said the common denominator among 90 percent of incarcerated males in the United States, including the young men who travelled to the Middle East to fight for the ISIS terrorist group, is that “they were dad-deprived.”

When there’s a dearth of father involvement, Farrell says, boys can develop a feeling of not being wanted or loved, and “not knowing who they are as a man.”

“There are many men who grow up with lack of fathers and do fine,” he said. “But there is always that hole there in their hearts.”

Farrell cites reports that Wortman was having relationship problems with his girlfriend and how he was reportedly acting jealous, which can compound the problem.

“When men have that loss of a wife or a girlfriend in combination with the underlying insecurities that come with a lack of father involvement in their lives—that’s when you have significant danger,” he said.

“And then the third characteristic that’s very, very common among mass shooters is a fascination with guns and the military or police. And Wortman was reportedly fascinated by air rifles and the police.”

Breakdown of the Family

Paul Adams, professor emeritus of social work at the University of Hawaii, says while he doesn’t wish to imply someone isn’t responsible for their crime because of societal factors, there were significant changes occurring in society at the time Wortman was growing up.

“He grew up in a time when social norms and institutions like marriage, which enable young men to learn to be manly to protect people, including from other males, were falling apart,” said Adams, an author and frequent commentator on human behaviour and male violence.

The divorce rate in North America ballooned in the late 1970s and early ’80s, leaving many children born during this period without the nurturing influence of a family unit with both a mother and a father.

“Now that was happening to millions of people and they didn’t turn into mass shooters … so you can’t use it to explain everything, like [Wortman] had no free will,” said Adams.

“But it does seem to me that these people grew up personally, socially, generationally, in a time that may be more of an obstruction to living a virtuous life.”

Adams has been an outspoken critic of how society, particularly educational institutions, have addressed violent behaviour exhibited by boys and men by promoting the adoption of more female traits.

“The main thing here in response to that, is since men behave badly we need to get them to behave more like women … or that we need more gun control or to teach young men to be more feminine or androgynous, that they should feel guilty about toxic masculinity and all of that,” he said.

“And I think the opposite view, the more traditional one, is that young men have to learn to be protectors and providers and that requires a kind of moral community.”

Adams notes that the source of the issue can be traced to even earlier decades.

“The 1960s was a period in which sexual revolution came to the fore; there was the pill and it enabled separation of sex from the family and marriage and children,” he said. “So you had a complete breakdown of the social norms and constraints that people grew up with.”

He says the changes were celebrated “as a kind of liberation from oppressive institutions,” but it also led to “people behaving irresponsibly and selfishly.”

“They lose their contact with a kind of moral community that sets out a path for young men to follow in their life.”

From Farrell’s vantage point, teaching boys at an early age “that they are needed as dads” is crucial, and for single moms to take on a more “dad-style of parenting.”

This includes postponing gratification—”eating your peas before you get the ice cream”—and controlled rough-housing, which, “when done in a dad-style mode where boundaries are established, is highly correlated with a child developing empathy,” he says.

“And if at all possible, get the biological father involved. If that’s not possible, then be sure to get the boy involved in Scouts, or a faith-based community … where you have good male mentors,” he adds.

“And then the next thing is to get your son involved in sports. Do not give your son a choice. Make it a requirement that he gets involved in sports, preferably in this order: organized team sports; pickup or casual sports, say at the local basketball court; and then self-starting sports like tennis or track and field, where you’re part of a team but have to initiate training by yourself.”

An earlier version of this report made an incorrect statement about the attack on Wortman’s girlfriend, based on emerging news at the time. In fact, the killer’s girlfriend survived the assault. The Epoch Times regrets the error.