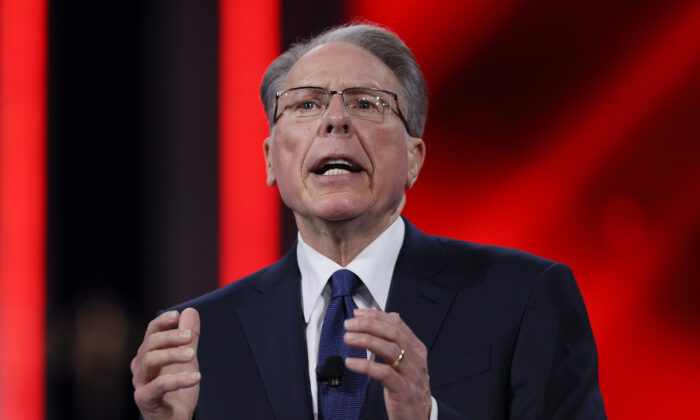 The CEO of the National Rifle Association (NRA) on Friday decried the “evil that occurred at Robb Elementary School” in Texas, while vowing to protect the constitutional right of citizens to defend themselves.

NRA CEO Wayne LaPierre said at the association’s annual convention that the NRA’s members are mothers and fathers who are grieving with the nation for the young lives “ruthlessly and indiscriminately extinguished” in Uvalde by the actions of “a criminal monster.”

He noted that while the NRA differed with President Joe Biden and the Democratic Party on policy, they “share common ground” in the belief that “tragedy will come again” but that “there are certain things we can do.”

“Restricting the fundamental human right of law-abiding Americans to defend themselves is not the answer. It never has been,” he declared.

LaPierre also called for people to reject the idea that society, not the criminal, is the guilty party every time the law is broken.

“It’s time to restore the American precept that each individual is accountable for his actions. And that’s why we, the NRA, will never ever stop fighting for the rights of the innocent [and] the law abiding to defend themselves against the evil criminal element that plagues our society,” he said.

Outside the convention, activists gathered to call for stricter gun laws, while Democratic lawmakers on Friday opened an investigation into five U.S. gun manufacturers to probe their figures on revenue, profit, marketing, and sales ahead of hearings by the House Oversight Committee on gun violence starting June 8.

One “common sense” policy prescription that lawmakers could pursue instead of seeking to make gun laws more restrictive, LaPierre said, is a move to afford schools the same level of security measures required at stadiums and government buildings.

This was echoed by former President Donald Trump, who spoke at the convention, and called for a “top to bottom security overhaul” at schools across the nation to protect students and teachers.

He also called for a stronger justice system that keeps hardened criminals off the streets, and more funding for police, Washington Examiner reported.