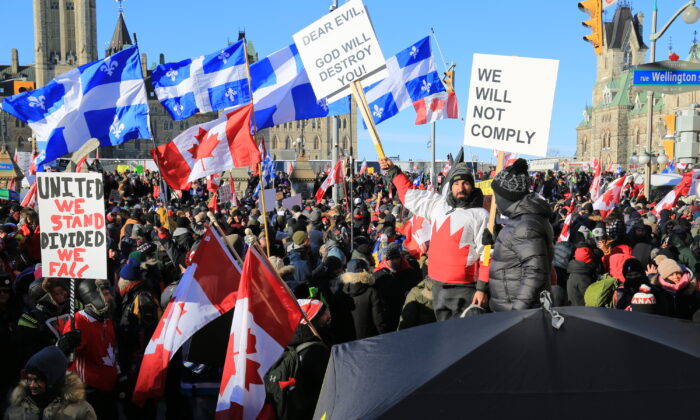 If there is a historical precedent for the truckers’ revolt in Canada, and the populist protests in so many other parts of the world, I would like to know what it is. It surely sets the record for convoy size, and it’s historic for Canada. But there is much more going on here, something more fundamental. The two-year imposition of bio-fascist rule by diktat seems ever less tenable—the consent of the governed is being withdrawn—but what comes next seems unclear.

We now have two of the most restrictive “leaders” in the developed world (Justin Trudeau of Canada and Jacinda Ardern of New Zealand) hiding in undisclosed locations, citing the need to quarantine following COVID-19 exposure. Streets globally have filled up with people demanding an end to mandates and lockdowns, calling for accountability, pushing for resignations, denouncing privileged corporations, and crying out for a recognition of basic freedoms and rights.

the revolution will not be televised

Note too that these movements are spontaneous and from “below”: They are populated mostly by the very workers whom governments shoved to face the pathogen two years ago while the ruling class hid behind their laptops in their living rooms. It was the lockdowns that sharply divided the classes and the mandates that are imposing segregation. Now we are facing a modern allegory to the peasants’ revolt in the Middle Ages.

For a long time, the workers complied bravely but have been forced to accept medical shots they neither wanted nor believed they needed. And many are still being denied freedoms they took for granted only two years ago, with their schools nonoperational, businesses wrecked, and places of entertainment closed or severely restricted. People turn on the radio and television to listen to lectures by ruling-class elites who claim to be channeling the science that always ends in the same theme: The rulers are in charge and everyone else must comply, no matter what is asked of them.

But then it became screamingly obvious to the world that none of it worked. It was a gigantic flop, and the sky-high cases of late 2021 in most parts of the world put a fine point on it. They failed. It was all for naught. This clearly can’t continue. Something has to give. Something has to change, and this change probably will not wait for the next scheduled elections. What happens in the meantime? Where is this going?

We’ve seen what revolutions look like against monarchies (in the 18th and 19th centuries), against colonial occupation, against totalitarian one-party states (1989–1990), and against banana-republic strongmen (20th century). But what does revolution look like in developed democracies ruled by entrenched administrative states in which elected politicians serve as little more than veneer for bureaucracies?

Since John Locke, it has been an accepted idea that people have the right to rule themselves and even to replace governments that go too far in denying that right. In theory, the problem of government overreach in democracy is solved by elections. The argument made for such a system is that it allows for peaceful change of a ruling elite, and this is far less socially costly than war and revolution.

There are many problems with matching theory and reality, one being that the people with the real power in the 21st century aren’t those we elect but those who have gained their privileges through bureaucratic maneuvering and longevity.

There are many strange features of the past two years, but one of them that stands out to me is how utterly undemocratic the trajectory of events has been. When they locked us down, for example, it was the decision of elected autocrats as advised by credentialled experts that were somehow sure that this path would make the virus go away (or something like that). When they imposed vaccination mandates, it was because they were sure that this was the right path for public health.

There were no polls. There was little if any input from legislatures at any level. Even from the first lockdowns in the United States, occurring March 8, 2020, in Austin, Texas, there was no consultation with the city council. Neither were citizens asked. The wishes of the small-business people weren’t solicited. The state Legislature was left out entirely.

It was as if everyone suddenly presumed that the whole country would operate on an administrative/dictatorship model, and that the guidelines of health bureaucracies (with plans for lockdowns that hardly anyone even knew existed) trumped all tradition, constitutions, restrictions on state power, and public opinion generally. We all became their servants. This happened all over the world.

It suddenly became obvious to many people in the world that the systems of government we thought we had—responsive to the public, deferential to rights, controlled by courts—were no longer in place. There seemed to be a substructure that was hiding in plain sight until it suddenly took full control, to the cheers of the media and the presumption that this is just the way things are supposed to be.

Years ago, I was hanging out in the building of a federal agency when there was a change of guard: A new administration appointed a new person to head it. The only change that the bureaucrats noticed was new portraits on the wall. Most of these people pride themselves in failing to notice. They know who is in charge and it isn’t the people we imagine to elect. They are there for life and face none of the public scrutiny much less accountability that the politicians face daily.

Lockdowns and mandates gave them full power, not only over the one or two sectors they previously ruled but the whole of society and all of its functioning. They even controlled how many people we could have in our homes, whether our businesses could be open, whether we could worship with others, and dictate what precisely we are supposed to do with our own bodies.

Whatever happened to limits on power? The people who put together the systems of government in the 18th century that led to the most prosperous societies in the history of the world knew that restricting government was the key to a stable social order and growing economy. They gave us constitutions and lists of rights, and the courts enforced them.

But at some point in history, the ruling class figured out certain workarounds to these restrictions. The administrative state with permanent bureaucrats could achieve things that legislatures couldn’t, so they were gradually unleashed under various pretexts (war, depression, terror threats, pandemics). Moreover, governments gradually learned to outsource their hegemonic ambitions to the biggest businesses in the private sector, which themselves benefit from increasing the costs of compliance.

The circle has been completed by enlisting Big Media into the mix of control via access to the class of rulers, to receive and broadcast out the line of the day, and hurl insults at any dissidents within the population (“fringe,” etc.). This has created what we see in the 21st century: a toxic combination of Big Tech, Big Government, Big Media, all backed by various other industrial interests that benefit more from systems of control than they would from a free and competitive economy. Further, this cabal leveled a radical attack on civil society itself, closing churches, concerts, and civic groups.

We’ve been assured by David Hume (1711–1776) and Étienne de La Boétie (1530–1563) that government rule is untenable when it loses the consent of the governed. “Resolve to serve no more,” wrote Boétie, “and you are at once freed. I do not ask that you place hands upon the tyrant to topple him over, but simply that you support him no longer; then you will behold him, like a great Colossus whose pedestal has been pulled away, fall off his own weight and break into pieces.”

That’s inspiring, but what does it mean in practice? What precisely is the mechanism by which the overlords in our time are effectively overthrown? We’ve seen this in totalitarian states, in states with one-man rule, in states with unelected monarchies. But unless I’m missing something, we’ve not seen this in a developed democracy with an administrative state that holds the real power. We have scheduled elections but those are unhelpful when elected leaders aren’t the real source of power, and when the elections are too far in the distant future to deal with a present emergency.

One very easy and obvious path away from the current crisis is for the ruling class to admit error, repeal the mandates, and simply allow for common freedoms and rights for everyone. As easy as that sounds, this solution hits a hard wall when faced with ruling-class arrogance, trepidation, and the unwillingness to admit past errors for fear of what that will mean for their political legacies. For this reason, absolutely no one expects the likes of Trudeau, Ardern, or Biden to humbly apologize, admit that they were wrong, and beg the people’s forgiveness. On the contrary, everyone expects them to continue the game of pretend so long as they can get away with it.

The people on the streets today, and those willing to tell pollsters that they are fed up, are saying “no more.” What does it mean for the ruling class not to get away with this nonsense anymore? Presuming that they don’t resign, they don’t call off the dogs of mandates and lockdowns, what is the next step? My instincts tell me that we are about to discover the answer. Electoral realignment seems inevitable, but what happens before then?

The obvious answer to the current instability is mass resignations within the administrative state, among the class of politicians that gives it cover, as well as heads of media organs that have propagandized for them. In the name of peace, human rights, and the renewal of prosperity and trust, this needs to happen today. Bury the pride and do what’s right. Do it now while there is still time for the revolution to be velvet.