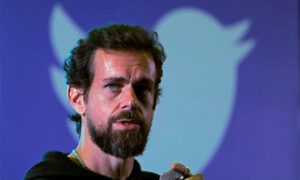 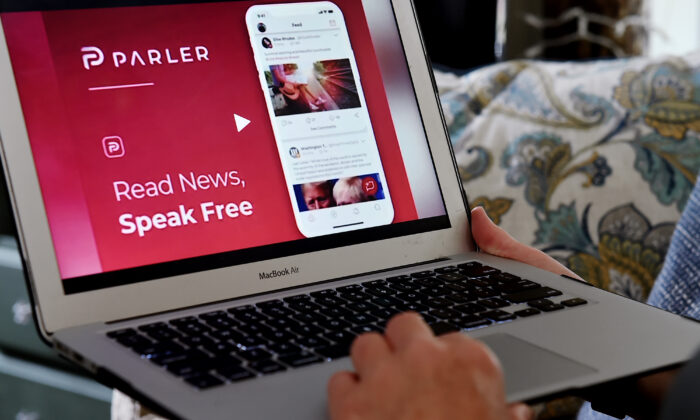 This illustration picture shows the social media website from Parler displayed on a computer screen in Arlington, Va., on July 2, 2020. (Olivier Douliery/AFP via Getty Images)
Viewpoints

That Twitter has just censored (“suspended the account” in their parlance) the film version of Lee Smith’s “The Plot Against the President,” directed by Amanda Milius, is not in the least surprising.

It’s only the latest example of what Twitter does, what we have come to expect of it—censor or whatever euphemism you want to apply because the massive site, we are informed ad infinitum, is a private company and can do what it bloody well pleases without having to pay the slightest obeisance to the Bill of Rights or even the Magna Carta.

Yes, it’s good publicity for the film, an accurate retelling of the horrifying Russiagate story, but that’s no excuse.

Whatever Jack Dorsey and his minions dislike, whatever threatens them, is automatically banned or, at best, temporarily tolerated with some supercilious notation about its supposed wrongheadedness. (And they claim they’re a public facility—like the phone company.)

Almost never do they say with any specificity why they are censoring. They just do it.

What is surprising is that so many of us are still on Twitter, addicted as any homeless crackhead in Santa Monica while fattening the coffers of a maniacal “progressive” billionaire by living as inadvertent vassals on his online totalitarian estate.

I wanted to get out years ago but hung on, even through the extraordinary blocking of the New York Post’s reporting on Tony Bobulinski’s testimony regarding the China-centric business dealings of Hunter Biden and the “big guy,” an act of hyperpartisanhip worthy of Goebbels or Beria.

I got out shortly thereafter and intend to stay out.

I urge everyone else to follow me, not because I’m anything special—as I noted it took me years to make the break—but because it’s by far the best thing to do.

Leaving, taking your business elsewhere, is the only way to destroy the pernicious influence of Twitter and the other tech giants. I’ve said it before, but this time I’ve done it myself. (Finally.)

And we can’t expect the government to do it for us.

Especially if Biden’s election goes through (I know, thankfully getting iffy), the chances of Section 230, the provision allowing Twitter and the others to avoid legal responsibility for what they publish, is unlikely to change. Big Tech literally owns the Democratic Party.

And if Donald Trump has a second term, I’m, alas, skeptical he will do much. He’s evidently addicted to Twitter as well. He should also get out.

I’m not going to spend time criticizing the narcissistic reasons so many media players, even those on the right who are mistreated, stay on. Obviously, I was one of them.

But I will address, via a personal anecdote, the question of whether both sides actually can discuss the issues together in a collegial manner, putatively the intention of Twitter, although totally ludicrous in its execution because the site’s bias against one of the sides is so extreme, even to the point of banning or censoring them (again, a distinction without a difference in the real world).

We tried the same attempt at collegiality at the beginning of PJMedia (then Pajamas Media) that was at first intended to have both liberal and conservative contributors. Then something strange happened. The liberals started asking for more money for their contributions. (Although remuneration was nowhere in the same league, I’ve always wondered what Juan Williams gets from Fox.)

I was CEO but the financier had to make the call on that. But the idea was so appalling to me, paying one side more than the other, I never took it to him, though I’m almost certain he would have turned it down.

So I’m on Parler now and, if you haven’t already, please join me. I know sometimes it seems like an echo chamber, although it really is an open forum and I haven’t seen any censorship.

But have no fear. There’s always something to argue about, even among conservatives and libertarians. Just give it a minute or two. Call it Freud’s “Narcissism of Small Differences.”

But whatever you do, get off Twitter. Stop feeding the monster.