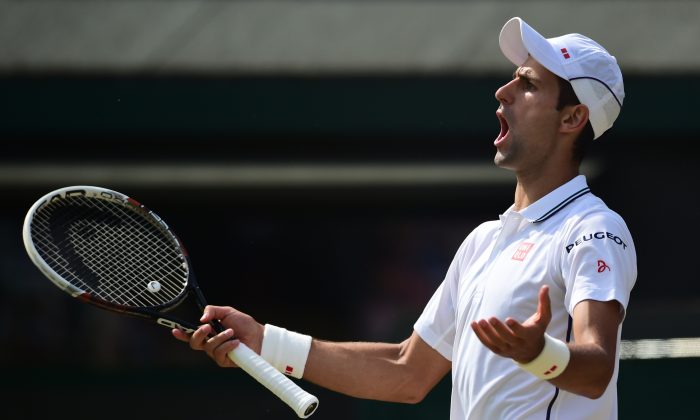 Novak Djokovic and Grigor Dimitrov are set to face off in a Wimbledon 2014 match.

Live stream will be available through BBC iPlayer and Watch ESPN. The game will also stream on ATP and TennisTV.

Here are some head to head stats for Djokovic and Dimitrov:

Djokovic is 1/4 to win according to most bookmakers, and Dimitrov is 7/2.

Check out some video highlights of their past matches, and an AP story below that.

Other broadcasters at the bottom.

LONDON (AP) — Novak Djokovic and Roger Federer talked kids after their quarterfinal wins Wednesday at Wimbledon — a pending one for Djokovic and Federer’s two sets of twins.

“The date is coming closer, the stomach is growing,” Djokovic said of his pregnant girlfriend, Jelena Ristic, who he’s been with for nearly nine years. “For us, it’s a new chapter of our lives. We’re full of joy.”

Over to Federer, who now is the father with wife Mirka of two sets of twins. Twin boys Leo and Lenny were born in April, brothers for twin girls Myla Rose and Charlene Riva, who turn 5 in three weeks.

“I don’t think many people know how hard it is,” Federer said. “I have a very busy life as it is, so I need to be well-organized and be on the same wave-length with all of us, each other, how we want to raise our kids, how we want the days to be, how shall we organize the days.”

Djokovic asked Federer for some parental advice a few weeks ago.

“He just asked me how life was on the road, how it is to be a dad,” Federer said. “You want to get some information, something you can wrap your mind around. I think he’s super excited. He’s very happy. I’m very happy for them.”

ROYAL MOMENT: Eugenie Bouchard was minutes away from walking out for her quarterfinal match against Angelique Kerber at Wimbledon on Wednesday when she found herself in the middle of a royal moment: Prince William, second in line to the British throne, was in the house with his wife Kate.

“It was funny, when we walked out at five to 1 of the members’ locker room, all these security guards rushed over to us and were like, ‘Nobody move. Move your bags to the side. There’s some royals coming through.’ We’re like, OK.’

“So we were just waiting, and then suddenly William and Kate walk by to go on Centre Court. I was a little bit in awe. That was my royal sighting of the day.”

Bouchard has her own royal connections. Her mother named her and her twin sister, Beatrice, after the daughters of Prince Andrew and former wife Sarah Ferguson.

Bouchard, playing on No. 1 Court, won in straight sets to become the first Canadian woman to reach a semifinal at Wimbledon.

THUMBS UP: With 37 Grand Slam singles titles among them, a quintet of Australian greats held court at Wimbledon on Wednesday.

It will have to wait for another year after the 19-year-old wild card-entry, who upset Rafael Nadal in the fourth round, lost to Milos Raonic in the quarterfinals Wednesday.

Laver said he was impressed with the progression of Kyrgios and his confidence levels, while Newcombe, who has done commentary on all of Kyrgios’ matches here for Australian television, said the 144th-ranked teen was not only “getting better with every match, but with every set.”

Rosewall recalled playing his first Centre Court match at Wimbledon in 1952 as a 17-year-old, and said he was impressed with Kyrgios in his debut there on Tuesday.

“I know how intimidating it was to be on the Centre Court at that stage,” Rosewall said. “I think it was an amazing performance.”