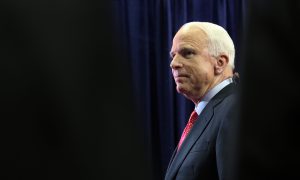 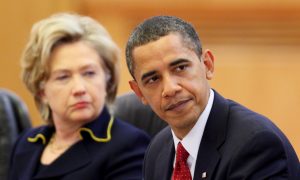 Russiagate May Become Spygate, as Those Responsible Are Held Accountable
0 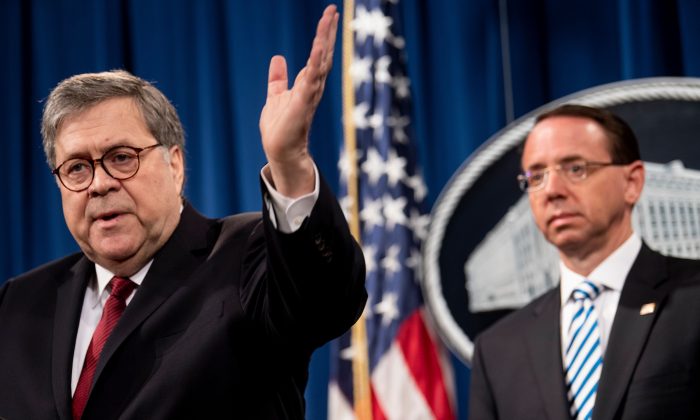 Deputy Attorney General Rod Rosenstein (R) listens while Attorney General William Barr speaks during a press conference about the release of the Mueller Report at the Department of Justice in Washington on April 18, 2019. (Brendan Smialowski/AFP/Getty Images)
Viewpoints

Nothingburger Mueller Report Came at a Cost Too Great for America

Can you believe we waited two years for this 400-page nothingburger? We finally have special counsel Robert Mueller’s long-anticipated report, and all it contains is a bunch of information we already knew.

Paul Manafort was a tax cheat. Did you not know that?

Mueller, who was supposed to be dedicated to investigating the alleged Trump–Russia conspiracy, indicted Paul Manafort, whom President Donald Trump fired, for run-of-the-mill tax evasion that took place years before the election.

Trump was upset about the lies being told about him. He fired FBI Director James Comey, who, after breaking virtually every procedural norm in the Hillary Clinton email investigation, was following the advice of clearly biased deep state bureaucrats to pursue Russiagate. He thought that the interrogation and prosecution of Lt. Gen. Michael Flynn were unnecessarily harsh and aggressive, and he told Comey as much.

Did you not know that either? Of course you did. We all did.

Beyond the fact that most of this already had been reported in the press, much of it, including the president’s justified complaints about this “witch hunt,” is no more than the natural reaction anyone might have if they were being hounded by the FBI, Congress, and the press over allegations of a crime that never took place.

So here we are—yet again—contemplating the latest “bombshell.”

We’ll be told that “this changes everything,” even though it just confirms what Attorney General William Barr already stated; that Barr was “premature” in his conclusions, even though he pored over the report for weeks in consultation with Mueller himself; and that we need to see “the whole report,” including redacted grand jury material, even though Barr is not allowed to disclose such details.

I’d like to believe that this will be the last such “bombshell” non-story, but if we’ve learned anything over the past two years, it’s that real evidence has never been a necessary component of the Russiagate hoax.

Democrats such as Rep. Adam Schiff (D-Calif.), who repeatedly misled the American people about having seen evidence of collusion over the course of both Mueller’s investigation and the separate probe conducted by his own House Intelligence Committee, have too much invested in this to back down now. Like a teenager caught smoking by his parents, his lies are compounded by more lies.

Attorney General Barr’s summary of the Mueller report did not stop them from insisting that collusion must have taken place, and I doubt the full report will convince them, either.

Moments after Barr concluded his press conference explaining the report’s findings, CNN commentator Keith Boykin took to Twitter to declare it “a total waste of time,” saying, “William Barr is a lackey for Donald Trump. He should resign in disgrace.”

Many liberals are also upset that Barr made the determination not to charge Trump with obstruction of justice, but the very fact that Mueller declined to make a prosecutorial decision on that issue proves that he did not find the evidence to back up the charge. Moreover, Barr made it clear that the president was entirely cooperative with the investigation behind the scenes, declining to assert executive privilege and encouraging witnesses to be honest and forthcoming.

Liberal conspiracy theories notwithstanding, the questions of collusion, obstruction, and conspiracy are settled. Trump and his campaign have been exonerated.

The remaining questions of political bias at the FBI and Justice Department, an improperly cozy relationship between the intelligence community and Democratic opposition researchers, and career staffers and legacy political appointees deliberately undermining the executive will be the subject of investigations to come, as Barr already has told Congress.

While Barr gets to the bottom of those concerns, the question that Americans should be asking themselves is, “Was this worth it?”

Was putting the entire country on an emotional rollercoaster for more than two years worth this empty, inconsequential report?

Were the Pulitzer Prizes prematurely awarded to The New York Times and The Washington Post worth devoting news cycle after news cycle to a non-story?

Was shaking the faith of millions of Americans in the very legitimacy of our democracy by trying to overturn a legitimate election result worth the boost a few politicians got in the polls?

Now that Mueller’s report is out, it’s quite clear that it wasn’t worth the price. We’ve spent the past two and a half years obsessing over a half-baked conspiracy theory manufactured by frustrated partisans, and we have nothing to show for it other than the anger and distrust this witch hunt has left in its wake.