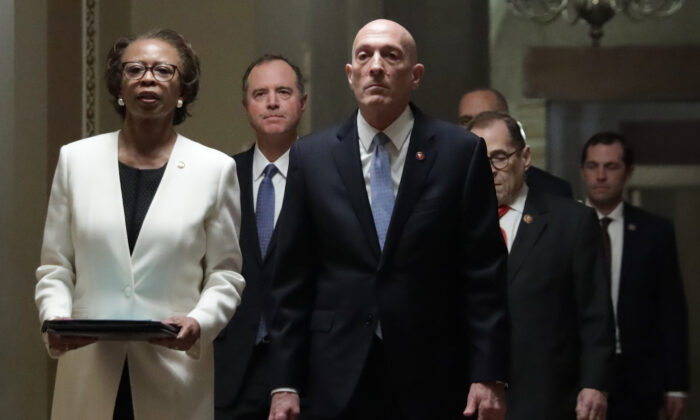 Not Impeachment, a Nervous Breakdown

I was going to write how the impeachment is a farce, as in Marx’s “History repeats itself, the first time as tragedy, the second time as farce.” (Actually, it would be the third time. Clinton’s impeachment was also a farce.)

But the situation is far too grave and ugly for laughter, even though the specter of Rep. Adam Schiff (D-Calif.) et. al., “solemnly” marching the articles of impeachment from the House to the Senate—as if they were the Magna Carta wrapped in the Shroud of Turin—was straight out of Monty Python. And the construction of the articles themselves is reminiscent of the contract scene in “A Night at the Opera,” except that scene had a happy ending, when Groucho and Chico gleefully ripped the idiotic document to shreds.

America is having a nervous breakdown—a serious, perhaps fatal one to its future. And it’s caused by the left.

Or what purports to be the left because, other than Sen. Bernie Sanders (I-Vt.) and his jejune followers, most of these people aren’t real leftists who, at least, believe in something, as wrong-headed as it is.

Many are rich people who long ago abandoned the working class—those are Trump’s people—in favor of fostering a sense of deprivation among grievance groups who have little (almost nothing, historically) to be upset about.

In fact, life has rarely, if ever, been better for every one of these groups. Even the latest of these constituencies—LGBTQ—is catered to virtually everywhere.

Meanwhile, these same constituencies and their political and media leaders seem almost deliberately ignoring those with real problems, such as the protestors in Iran and Hong Kong who are risking their lives for freedom. Go figure.

So what do we have before us—impeachment or a nervous breakdown?

The latter, obviously (despite the “gravitas” you will see and have seen exhibited endlessly from the talking heads on television on all sides of the equation).

But what’s causing it?

The loss of power is clearly a large part of it. And, needless to say, Trump—his persona, not really his policies, which aren’t even all that radical and are often patently successful—offends them at their very core.

It’s almost as if Trump himself were a zero-sum game. If Trump exists, they don’t, so Trump must go. Impeach. Remove. Destroy (him and his supporters).

This last has a deeply neurotic basis whose provenance is hard to suss out, although it suggests a serious personal emptiness. Nevertheless, it seems clear this is about the very existence of Trump, but hardly at all about what he does, which is fungible. The attacks on the substance are pro forma, as in the questioning of the recent assassination of the villainous Soleimani that, if it had been done by Obama, would have been applauded.

While this projection of malign thoughts onto Trump has reached its apotheosis in the impeachment, it isn’t new. Schiff, now chief prosecutor before the Senate, was doing nothing but projecting when, for two years, he told every television camera he could find that he had seen evidence of Trump–Russia collusion. No doubt on some level, he believed his own lies. Good (or at least serial, as in his case) liars do.

This excessive primacy of neurosis in politics—some of it obviously is always there—is dangerous to our republic, perhaps terminally, and to us all personally.

Frank Buckley has a new book out—“American Secession: The Looming Threat of a National Breakup”—that posits just that. We can only hope that if it happens, it’s by secession and not the alternative. Another Trump electoral victory, especially if it’s greater than before, could set off an explosion with these people.

Epoch Times senior political analyst Roger L. Simon is the author of “The Goat,” which he suggests as an amusing alternative to the coming non-stop impeachment coverage.