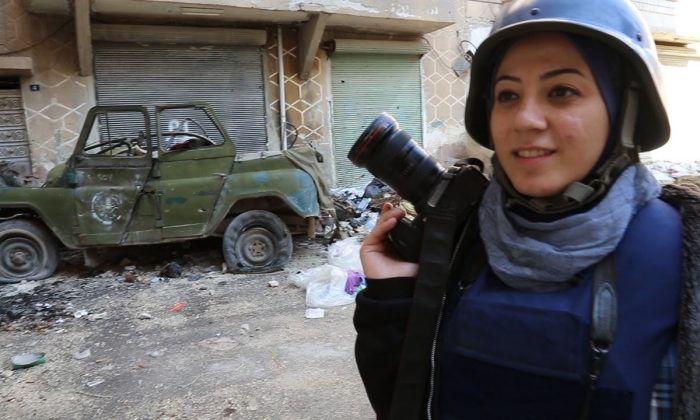 Syrian teacher-turned-war-photographer Nour Kelze in Matthew VanDyke’s short documentary “Not Anymore: a Story of Revolution.” (Courtesy of Not Anymore)
Entertainment

‘Not Anymore’: A Powerful Short on Syria

The self-described freedom fighter escaped from Gaddafi’s Abu Salim prison, where he was held in solitary during the Libyan Civil War. Like a 21st century throwback to partisan press corps that covered the Spanish Civil War, VanDyke both documents and advocates on behalf of the everyday Syrians rebelling against Assad’s dictatorship in his short documentary, “Not Anymore: a Story of Revolution.”

VanDyke’s fixer is also his producer and subject. Nour Kelze sounds like she was once the sort of modern, educated woman so desperately needed in the Middle East.

A former schoolteacher, she explains that she once wore fashionable clothes and high heels, but “not anymore.” With the onset of the Baath regime’s crackdown, she became a war photographer, adopting the profession’s Kevlar helmet and vest.

Kelze guides viewers through the chaos that once was the thriving city of Aleppo. Although still populated, the neighborhoods strafed by Assad’s forces now look like a ghost town. Free Syrian Army commander “Mowya” wryly observes that Assad certainly made good on his promise to clear out the panhandlers from the desolate, bombed-out streets.

While “Not Anymore” clocks in at just under 15 minutes, VanDyke captured more action in that timeframe than he probably would have liked. Unlike some documentary filmmakers, he is clearly willing to put himself on the front line, just like his producer. That gives the documentary real immediacy and authenticity.

Throughout the film, VanDyke’s interview subjects pointedly ask why America has not forcefully interceded on their behalf. He is understandably diplomatic in his responses, but the hard truth is that for the last four years or so, American foreign policy has been more interested in cultivating relations with regimes like Assad’s than changing them.

Perhaps his film will open some eyes. Granted, it has a decided point of view, but it still is a powerful example of cinematic journalism.

Recommended for all viewers concerned about conditions in Syria, “Not Anymore” screens on April 8 at the Anthology Film Archives as part of the Take Two Film Festival.