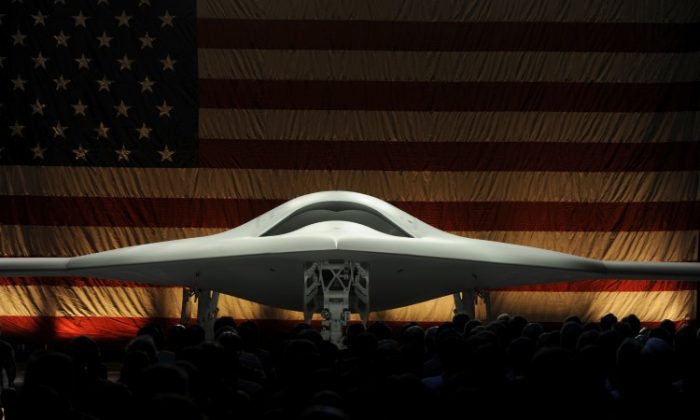 X-47B UCAS workers on runway. The drone will be the first of its kind to be able to land on an aircraft carrier without a pilot. (Courtesy of Northrop Grumman)
Military

The continued dominance of the U.S. defense industrial base isn’t guaranteed without improvements to funding and an easing of bureaucracy, according to the chief executive of one of America’s foremost defense corporations.

“When you look at the breadth of challenges that the U.S. and our allies need to deal with, I can’t remember a time when it’s been as broad as it is today,” said Kathy Warden, CEO of Northrop Grumman.

“I look 10 years into the future, and the pace at which other nations are building up their arsenals, including nuclear weapons, it worries me that we are on the verge of finding ourselves in a very complicated, if not dangerous world.”

The comments came during a wide-ranging webinar on the future of the U.S. defense industrial base hosted by the Washington-based Brookings Institution.

Warden’s reference to nuclear proliferation comes amid mounting tensions over the military ambitions of the Chinese Communist Party (CCP) and its apparent dedication to building nuclear weapons.

Experts have warned that the CCP is in a “sprint” to nuclear dominance, and Sen. Angus King (I-Maine) recently warned that the regime was “uninterested” in concepts of nuclear parity. Likewise, a recent Pentagon report stated that the Chinese regime could amass 1,000 nuclear warheads by 2030.

Meanwhile, according to Warden, the United States isn’t spending enough to meet the challenges it faces.

“China has increased their budget, basically doubling their budget on national security in the last 10 years,” Warden said. “And it’s growing on average 7 percent a year.”

“We’re not keeping up with inflation with U.S. defense budgets.”

To that end, Warden underscored that the United States would have to work out a way to adequately compete with two nuclear peers, funding its growing tangle with the CCP while keeping an eye on Russia, which holds the most nuclear warheads of any nation.

“China continues to build up their capabilities across a very wide spectrum, and we have to be mindful of that while at the same time recognizing, as the [Director of National Intelligence] recently said, that Russia will remain in the near term the pacing threat, having the greatest capability in weapons of mass destruction,” Warden said.

She said that, in order to more effectively build a U.S. force capable of such deterrence, more attention would need to be paid to the types of capabilities being developed rather than how many assets were being fielded.

“We need to, in my view, stop measuring force structure just on the number of certain assets, but look at what are those assets then capable of doing,” Warden said. “And if they aren’t going to be capable and relevant in a high-end conflict, and we think that’s where we might be over the next couple of decades, then we need to make decisions based on that.”

Comparisons between China’s numerically superior navy and the United States’ more technologically advanced force were recently made in a Heritage Foundation report. The report warned that numbers were insignificant, as China’s navy could overwhelm U.S. forces in the Pacific in great enough numbers.

Warden said government bureaucracy is a challenge to effectively developing new military capabilities. In this, her comments echoed the outgoing vice chairman of the Joint Chiefs of Staff, who said earlier this month that the Pentagon was hamstrung by a “brutal” bureaucracy that’s impeding the nation’s ability to deter the CCP’s military aggression.

“There’s a healthy amount of that [bureaucracy] that ensures product quality, safety, [and] reliability,” Warden said. “That’s essential. We have to do that.”

“But then there’s a level of it that’s checking the checkers, and becomes a compliance-driven set of objectives. We try to drive that out.”

A key problem stemming from this bureaucracy is an inadequate understanding of risk, Warden said. In this, too, her comments reflected those of the vice-chairman and of the Pentagon’s former chief software officer, who said the Pentagon needed to do more to increase risk-taking among its leadership.

“If we want the breadth of innovation and we want to be able to move forward and take risks, and that includes failure, it means that we have to count on investing in ideas that will not generate results,” Warden said.

In all, Warden said that American ingenuity and perseverance would succeed where governmental bureaucracy failed. But, she warned, without better investment and practices in the defense sector, the continued dominance of the United States wasn’t guaranteed.

“I’m an optimist,” Warden said. “I believe in this country and the capability of its people, even more so than what technology can offer, what policies will define. I have seen the resiliency of the American people and I do believe that we will rise to the occasion, whatever it requires.”

“I still see the U.S. defense industrial base as the strongest in the world, but we can’t assume that that will be the case going into the future.”