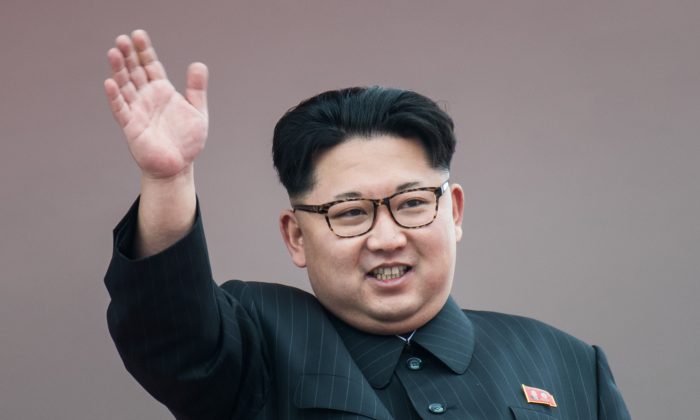 North Korean leader Kim Jong-Un waves from a balcony of the Grand People's Study House following a mass parade marking the end of the 7th Workers Party Congress in Kim Il-Sung Square in Pyongyang on May 10, 2016. North Korea kicked off a massive parade in the centre of Pyongyang on May 10. (ED JONES/AFP/Getty Images)
2016 race

“In my personal opinion, there are many positive aspects to the Trump’s ‘inflammatory policies’,” wrote Han Yong Mook, who introduced himself as a Chinese North Korean scholar.

“Trump said ‘he will not get involved in the war between the South and the North,’ isn’t this fortunate from North Koreans’ perspective?”

Mook applauded Trump’s foreign policy speech in March when he spoke about approaching North Korea and opening conversation with the country:

The editorial also called Clinton “dull” and rejected her method of resolving the nuclear issues she’s proposed which mirrors the Iran nuclear deal:

“The president that U.S. citizens must vote for is not that dull Hillary—who claimed to adapt the Iranian model to resolve nuclear issues on the Korean Peninsula—but Trump, who spoke of holding direct conversation with North Korea.”

Earlier in May, Trump said that he was open to meeting with North Korea’s leader Kim Jong-un:

“I would speak to him, I would have no problem speaking to him. At the same time I would put a lot of pressure on China because economically we have tremendous power over China.”

The endorsement comes on the same day that South Korea Yonhap News Agency reported that another North Korean mobile-launched missile had failed.

Citing the South Korean Joint Chiefs of Staff, Yonhap said the missile was launched from North Korea’s east coast early this morning, but was unsuccessful.

Trump welcomed the praise, saying the endorsement was a “great honor”:

“It is always a great honor to be so nicely complimented by a man so highly respected within his own country and beyond,” Trump said in a statement released by campaign spokeswoman Hope Hicks.

“I have always felt that Russia and the United States should be able to work well with each other towards defeating terrorism and restoring world peace, not to mention trade and all of the other benefits derived from mutual respect.”