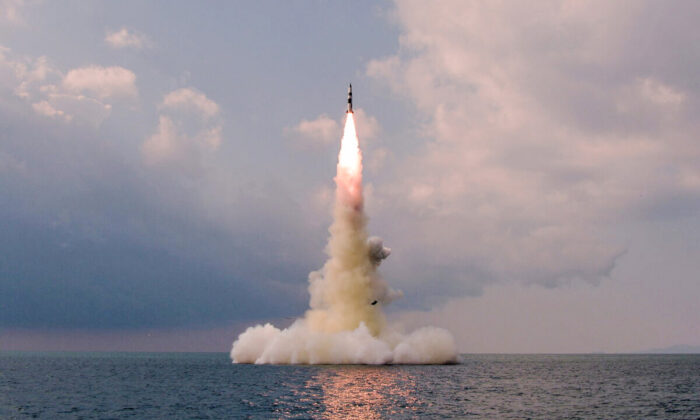 A new submarine-launched ballistic missile is seen during a test in this undated photo released by North Korea's Korean Central News Agency (KCNA) on Oct. 19, 2021. (KCNA via Reuters)
Asia & Pacific

North Korea test-launched a “new type” of ballistic missile from a submarine off its eastern coast into the Sea of Japan on Tuesday, according to state media.

The state media report came a day after South Korean and Japanese officials said they believed Pyongyang had fired a submarine-launched ballistic missile (SLBM) at about 10:17 a.m. local time from the vicinity of Sinpo—where North Korea keeps submarines and equipment for test-launching the missiles.

The news prompted the White House to warn North Korea to refrain from further “provocations.” Press secretary Jen Psaki said on Tuesday that the United States remained open to engaging diplomatically with North Korea over its weapons programs.

Pyongyang so far has rejected those overtures, accusing the United States and South Korea of talking diplomacy while ratcheting up tensions with their own military activities.

According to the state media report from the official Korean Central News Agency (KCNA), North Korea test-fired a new, smaller type of SLBM from a submarine that was also used to test-launch another SLBM in 2016. The state news agency said the new missile had “lots of advanced control guidance technologies.”

Japanese Defense Minister Nobuo Kishi said initial analysis suggested that two ballistic missiles were fired. Prime Minister Fumio Kishida said that it was “very regrettable” that North Korea has carried out a flurry of missile tests in the past month.

“[The SLBM] will greatly contribute to putting the defense technology of the country on a high level and to enhancing the underwater operational capability of our navy,” KCNA added.

A source familiar with the matter told Agence France-Presse that the SLBM traveled around 590 km (365 miles) at a maximum altitude of about 60km.

Some of the weapons tests carried out by North Korea violate international sanctions. The United Nations prohibits North Korea from testing ballistic missiles and nuclear weapons, while North Korea says it needs to defend itself against possible invasion by the United States.

North Korea has a large fleet of aging submarines, but has yet to deploy operational ballistic missile submarines beyond the experimental Gorae-class boat used in the tests.

Diplomats told AFP that an emergency closed-door meeting will be held on Wednesday afternoon by the U.N. Security Council on North Korea, at the request of the United States and the United Kingdom.