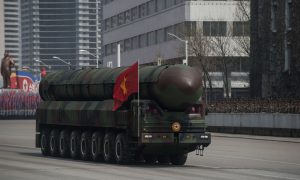 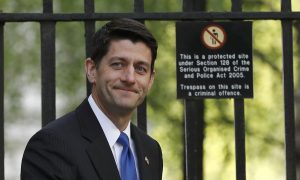 Ryan: US Must Keep Military Options Open on North Korea
0 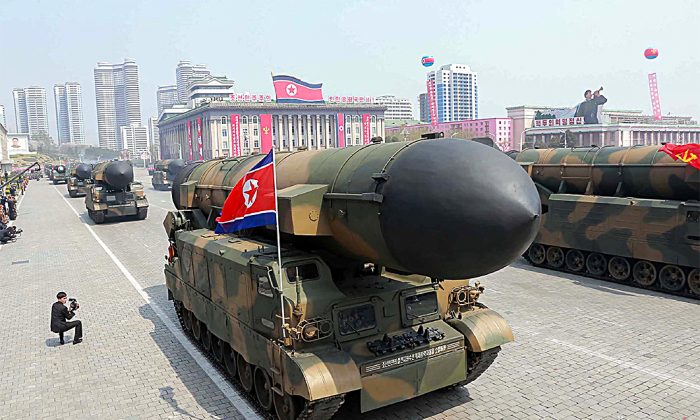 Within China, entrenched political rivals of leader Xi Jinping share common ground with North Korea’s totalitarian Kim regime, and appear to have been leveraging the threat of nuclear weapons even at the expense of Chinese national security.

For years, leaders affiliated with former Communist Party boss Jiang Zemin had a stake in maintaining North Korea’s nuclear threat as a distraction from their own human rights abuses, as well as to tie the hands of their political rivals, according to an expert in Chinese affairs.

Today, Pyongyang’s nuclear brinksmanship has made headlines, and stirred U.S. and Chinese leaders into a surprising degree of collaboration when Xi and Trump met in Florida to discuss the crisis. But such discussions must take into account the previous ties between China and North Korea, fostered by former leader Jiang.

At 90, Jiang is more a symbol for corruption and human rights abuses than he is a participant in the nation’s contemporary governance.

But one generation away is a sprawling clique of Party cadres that are on the retreat as they resist attempts by the Xi administration to purge them from the influential positions Jiang and his allies provided them.

Photos from 2004 show Jiang and late North Korean dictator Kim Jong Il in fraternal embrace. Politicians associated with Jiang, including three of the seven members of the Politburo Standing Committee that directs the Chinese Communist Party (CCP), have had particularly close links with Pyongyang.

Standing committeemen Zhang Dejiang and Zhang Gaoli (no relation) studied in Pyongyang and have made several state visits to North Korea, hinting at their influence in Sino–North Korean cooperation. Zhang Dejiang heads the National People’s Congress and has the portfolio for Hong Kong affairs. He built his career across the border in northeastern China.

The third Jiang associate currently serving on the politburo, Liu Yunshan, is China’s propaganda chief. He has made multiple high-profile visits to North Korea in his capacity as director of a CCP executive committee dedicated to the “construction of spiritual civilization.”

Under the auspices of the CCP’s International Liaison Department, headed by Jiang’s protégé Wang Jiarui from 2003 to 2015, many Chinese companies traded with North Korea despite U.N. sanctions.

But policymakers in Beijing have worried for years about the threat of North Korean missiles, which could easily be deployed within striking distance of major Chinese cities. Yet many goods that North Korea needed for its nuclear and rocket projects—such as aluminum oxide and road-mobile ballistic missile launchers—came directly from Chinese firms.

As said in a 2015 report by the Congressional Research Service, U.S. Congress has long tried to reduce “the role of the People’s Republic of China (PRC) in the proliferation of weapons of mass destruction (WMD) and missiles that could deliver them. Recipients of PRC technology included Pakistan, North Korea, and Iran.”

China affairs expert Don Tse says CCP leaders affiliated with Jiang may have even influenced the timing of North Korea’s five nuclear tests to coincide with times when the Jiang elites came under pressure for human rights abuses, or when they experienced political turmoil from within the Chinese regime.

Tse believes that the North Korean nuclear test held in October 2006 was meant to obscure the September downfall of Chen Liangyu, a Jiang ally who was then the CCP secretary of Shanghai and a prime candidate for future Chinese leadership.

And around the time of Xi’s rise to power in 2012, Tse says, there was a plot by then-Chinese security czar Zhou Yongkang to hamstring Hu Jintao’s attempts at Korean denuclearization.

Zhou, director of the CCP’s political and legal affairs commission and head of international Chinese security forces, was a main pillar of the Jiang network, who was arrested, purged, and imprisoned by Xi.

Jiang Zemin made use of the nuclear threat from North Korea to distract American attention away from Chinese human rights violations, as well as resist political attack from factions within the CCP.
— Don Tse

“But Zhou Yongkang leaked this information to Kim Jong Un, who had Jang purged.” North Korean media reported that Jang was executed on Dec. 12, 2013, after a one-day trial.

Jiang and his associates have ample reason to resist regime change or the restructuring of Chinese leadership.

At a time when Western observers expected economic growth to foster democracy and human rights in China, Jiang’s regime intensified repression against China’s ethnic minorities and religious faiths not controlled by the state.

Under Jiang, who made his name during and after the Tiananmen protests, the CCP retained some of the most brutal characteristics of its Marxist-Leninist ideology, launching an all-out persecution of the Falun Gong spiritual practice in 1999. China’s internal security budget ballooned, at one point surpassing even that of the People’s Liberation Army. Hundreds of thousands of Falun Gong adherents—as well as Uyghur Muslims, Tibetans, and house church Christians—have been murdered to feed China’s state-sponsored organ harvesting industry.

“Jiang Zemin made use of the nuclear threat from North Korea to distract American attention from Chinese human rights violations, as well as resist political attack from factions within the CCP who don’t have the blood of innocents on their hands,” Tse said.

Recent events likely support this analysis. As a politician with no ties to Jiang or his legacy of mass persecution, Xi is not likely to see Pyongyang’s antics as benefiting his prestige or his nation.