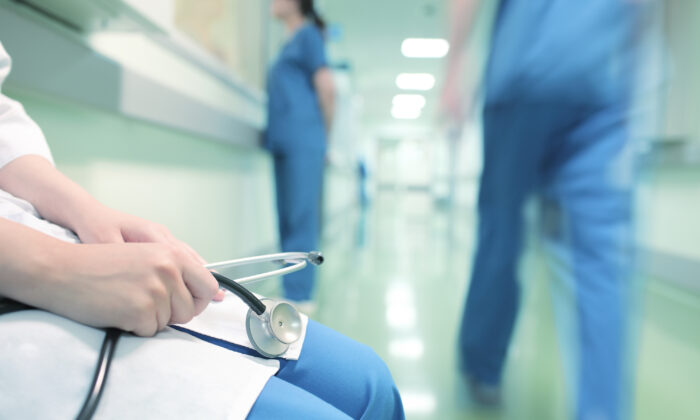 North Carolina’s largest hospital systems made billions of dollars in profits during the pandemic, while simultaneously taking $1.5 billion in taxpayer-funded COVID-19 relief funds, according to a report released Wednesday by the state treasurer’s office.

The report, titled, “North Carolina Hospital Systems Profit During COVID” was published by State Treasurer Dale Folwell who called on the hospital systems to “use their profits to lower costs for patients” or “return unnecessary, taxpayer-funded relief dollars.”

According to the report, Atrium Health, Cone Health, Duke Health, Novant Health, UNC Health, Vidant Health, and WakeMed made a combined $5.2 billion in net profits in 2021 and recorded $7.1 billion in growth in cash and financial investments from 2019 to 2021.

Six of those hospital systems enjoyed higher net profits than in the years before the pandemic, the report states.

That growth came as the seven hospital systems reportedly took $1.5 billion in taxpayer-funded COVID relief meant to help support hospitals who were struggling through the pandemic, as well as another $1.6 billion in Medicare Accelerated and Advance Payments from 2020–2021.

“These systems boasted huge reserves, but they still took the bulk of the relief funds meant for struggling hospitals—and then failed to dedicate more than a fraction of their windfall to increasing charity care for their suffering patients,” Folwell said in a press release unveiling the report.

The report analyzed the audited yearly financial statements of the state’s seven largest hospital systems as well as Medicare cost reports, and was conducted in collaboration with experts at the North Carolina State Health Plan and the National Academy of State Health Policy.

It was peer-reviewed by researchers at Johns Hopkins Bloomberg School of Public Health.

Among the seven hospital systems, Duke Health outpaced them all with a 41 percent net profit in 2021, according to the report. In 2019, Duke Health’s net profit margin was 11 percent.

Meanwhile, Atrium Health reportedly took the most amount of money in taxpayer relief dollars—$589 million in COVID relief and another $438 million in Medicare advance payments.

“Atrium Health then made a $1.7 billion net profit after its merger with Wake Forest Baptist Health in 2021,” according to the report.

Despite taking the massive government handouts, the report states that all seven of the hospital systems had huge amounts of resources compared to rural hospitals and independent physicians, while the majority had “enough cash on hand to operate for more than half a year without any incoming revenue, as well as billions of dollars in cash and financial investments.”

The report further found that despite their reported profits, the hospital systems shared little of it with disadvantaged patients, noting that a third of North Carolina hospitals spent less on charity care in 2020 during the peak of the pandemic.

Across 104 hospitals, charity care spending rose only $246.5 million from 2019 to 2020, while some hospitals increased billing of poor patients that were eligible for charity care.

Atrium Health sued hundreds of patients, according to the report.

“While health care workers suffered on the front lines, hospital executives made billions on Wall Street,” said Folwell. “None of these nonprofit systems pay any property, income or sales taxes. Many failed to fully honor their charitable mission even when thousands of North Carolinians lost their businesses and their jobs during the pandemic.”

Folwell is urging the hospital systems to either return the taxpayer money or commit to reducing hospital price inflation. The Treasurer is also supporting the Medical Debt De-Weaponization Act which aims to bolster accountability, transparency and consumer protections on medical debt.

“We have a duty to hold hospital executives accountable for wrecking the financial health of thousands of patients and transferring wealth from citizens to them,” Folwell added.

In a statement Wednesday, the North Carolina Healthcare Association, which represents the state’s hospitals, called Folwell’s report “politically motivated” and said it “falsely demonizes health systems for applying for and using Provider Relief Funds (PRF) to respond to the COVID-19 crisis.”

“As with other politically motivated statements by the Treasurer, the report conveniently forgets the reality on the ground of what hospitals were facing … Cherry-picking financial data, and then spinning it, is not reflective of the many immense struggles and challenges facing the hospital field, including a workforce shortage criticism along with skyrocketing costs for supplies, equipment, drugs and labor, and near-historic levels of inflation,” the NCHA statement said.

Report Is ‘Charged And Misleading’

Charlotte-based Atrium Health also issued a statement saying it was being “attacked” by the report.

“It’s troubling that health systems like Atrium Health are being attacked while we are still caring for communities that are recovering from the pandemic,” Atrium, the city’s largest hospital system, said.

“The reality is the $719 million in provider relief funds we have received covers less than half of the adverse $1.55 billion financial impact we have incurred as a result of the pandemic.”

Duke Health said it had “a total community investment of $823 million, including $141 million in financial assistance to nearly 270,000 patients” while noting that COVID relief funds had helped it keep its 25,000 staff members employed during the pandemic.

UNC Health called the report “charged and misleading” and said it “paints a baseless picture of excess relief funds as ‘profit’ and seems to intentionally obscure the fact that advanced Medicare payments were not gifts—UNC Health has already paid the federal government back almost all of the $305 million it received from advance Medicare payments.”

A spokesperson for Novant Health told The Epoch Times: “Our teams at Novant Health have been tirelessly working on the frontlines of this pandemic for more than two years to ensure everyone, regardless of their ability to pay, is provided the care and attention they deserve.”

A spokesperson for WakeMed said: “Since 2020, WakeMed has incurred significant costs related to the pandemic … Operational funds were used to pay for higher cost resources like PPE and medical supplies, medications, COVID testing, vaccine infrastructure, and rising labor demands—all necessary expenses to support patient care, safety, and staff needs during the pandemic.”

“Though COVID-19 impacted every aspect of hospital operations and revenue, WakeMed continued to care for our patients, our staff, and our community like never before.”

The Epoch Times has also contacted Cone Health and Vidant Health for comment.