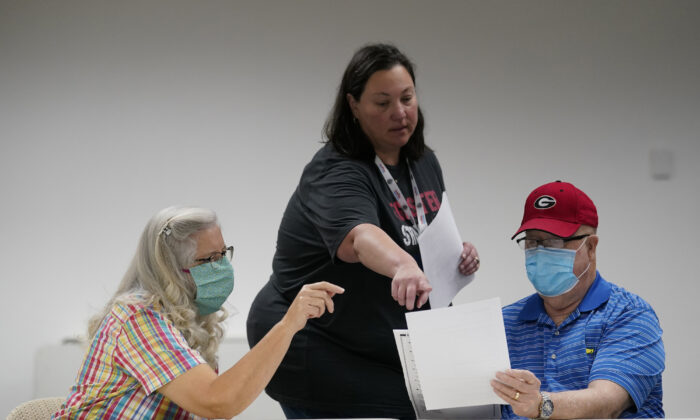 Chairman of the caucus, Rep. Keith Kidwell (R-Beaufort), told The Epoch Times that although there is a statute that requires state employees to comply with requests for data from the North Carolina General Assembly, Karen Brinson Bell, executive director of the elections board, declined the request to inspect voting equipment used in the November 2020 election in a July 7 letter.

During a July 15 press conference, Kidwell said the HFC had been responding to public concern regarding transparency in the election process.

Before the denial, the HFC met with the BOE twice, and Kidwell added that Elections Systems & Software (ES&S), the largest election vendor for North Carolina, agreed to provide access to three voting systems it manufactures.

At the time, ES&S indicated that they would be willing to take any inspected system at a randomly selected precinct by the HFC and recertify the equipment so that there would be no cost to the BOE or county, Kidwell said.

ES&S, he said, “seemed eager” to have the inspection to relieve the public concerns about the equipment.

“We would not invade, compromise, or damage the machines,” Kidwell said in the press conference. “The only thing that would happen is the ES&S service technician would open, show us and allow us to see that there are no modems in the machines.”

According to Bell, in her statement to the HFC, neither ES&S nor the machines manufactured by Hart InterCivic (Hart) have modems, which are prohibited by state law.

After speaking with ES&S officials, Bell said in the statement that “they [ES&S] were unaware of any commitment by the company to take any accessed machines back to their headquarters for recertification.”

ES&S didn’t respond immediately to The Epoch Times in request for a statement.

She included a letter from Geoff Hale, director of the Election Security Initiative (ESI) at CISA, in which he said “allowing unknown, unauthorized, or inexpert actors” to access the machines could risk damage and manipulation, which would compromise the security of the equipment.

Bell said that the BOE would not “partake in, nor perpetuate, myths and falsehoods about voting systems or elections.”

Kidwell said he wouldn’t classify members of the General Assembly as “unknown, unauthorized, or inexpert actors.”

The goal of the HFC is to show the public that voting equipment is not a problem, Kidwell said.

The HFC has made no false or “misleading statements about the machines, processes, or staff,” Kidwell said.

“In fact, we have sent out press releases and made social media post that clearly stated we thought—from what we had seen to date—our system did not have modems, and appeared to be secure,” Kidwell said.

Up until the statement from Bell, Kidwell said the HFC had been “impressed by the cooperation” from the BOE.

“Now we’ve hit a wall,” Kidwell said in the press conference. “That wall—they’re seemingly hiding behind. Miss Bell, tear down that wall, unless you have something to hide.”

The BOE told The Epoch Times that it’s not aware of a statute that allows a member of the General Assembly access to voting machines.

Because county boards of elections are legally responsible for the voting equipment, access must be restricted to prevent tampering, said the BOE.

North Carolina General Statute 120-19 states that “all officers, agents, agencies and departments of the State are required to give any committee of either house of the General Assembly, or any committee or commission whose funds are appropriated or transferred to the General Assembly or to the Legislative Services Commission for disbursement, upon request, all information and all data within their possession, or ascertainable from their records.”

“Here is the key,” Kidwell said. “This requirement is mandatory.”

Kidwell added that, at this point, he’s not asking for a “full-blown audit,” which is what took place in Arizona when Florida-based tech firm Cyber Ninjas performed a months-long forensic audit.

Last week, Arizona’s GOP-led state Senate held a hearing in which Cyber Ninja CEO Doug Logan spoke, telling senators that, among other discrepancies, auditors could find no record of the county sending more than 74,000 mail-in ballots.

After the hearing, some Republicans called for Arizona’s 11 electors—who went for Biden—to be recalled, to which Arizona Senate President Karen Fann, a Republican, said that the state Senate can’t recall electors.

Correction: A statement from Bell was misattributed to Hale. The Epoch Times regrets the error.