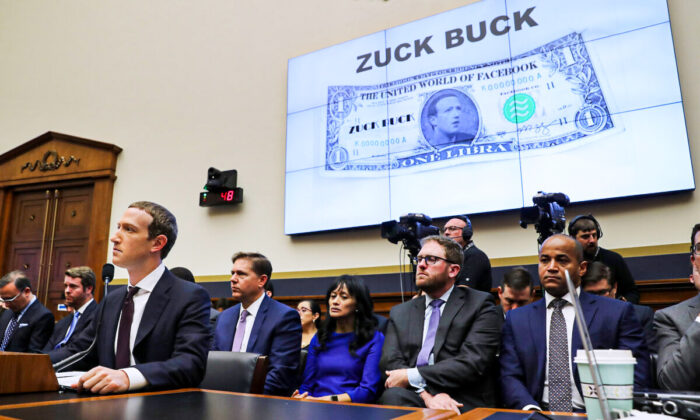 Facebook co-founder and CEO Mark Zuckerberg (L) testifies before the House Financial Services Committee in the Rayburn House Office Building on Capitol Hill October 23, 2019 in Washington, DC. Zuckerberg testified about Facebook's proposed cryptocurrency Libra, how his company will handle false and misleading information by political leaders during the 2020 campaign and how it handles its users' data and privacy. (Chip Somodevilla/Getty Images)
Election Integrity

The North Carolina Senate approved a bill that seeks to ban private funding for state and county election boards.

The push for Senate Bill 725, which bars the use of so-called Zuck Bucks, originated from what some have described as a record amount of private funds flooding into the 2020 election. If the measure isn’t signed or vetoed after 10 days of reaching Gov. Roy Cooper’s desk, it becomes law.

Among those private organizations donating funds to local election boards was the Chicago nonprofit Center for Tech and Civic Life (CTCL).

Before the 2020 election, Facebook founder Mark Zuckerberg and his wife, Priscilla Chan, donated $350 million to CTCL to fund local election boards throughout the United States, for the stated purpose of creating a voting environment that reduced the spread of the coronavirus.

According to the Capital Research Center, Martin Oakes, a former Lincoln County commissioner in North Carolina, traced up to $5.4 million of CTCL’s “Zuck Bucks” to North Carolina, which included a $1 million grant to the state board of elections.

The founders of CTCL, according to Influence Watch, were co-workers at the New Organization Institute (NOI), which was described by a Washington Post reporter as “the Democratic Party’s Hogwarts for digital wizardry.”

According to Influence Watch, NOI was a “major training center for left-of-center digital activists over the decade of its existence.”

Republican state Sen. Paul Newton, a primary sponsor of the bill, told The Epoch Times that private funding, whether it be from the left or right, compromises the integrity of the election.

When he began practicing law, Newton said there was a code of conduct to avoid the appearance of impropriety, which Newton said should apply to elections.

However, he said, the people counting the votes were getting paid by a left-leaning organization.

Election funding and administration is a governmental function, like public safety, he said, not to be interfered with by private interest groups.

“Elections should not be brought to you by Facebook,” Newton said.

Democrats have criticized the bill, saying it would prevent needed funding to local election boards.

The Carolina Journal reported that Democrat state Sen. Jay Chaudhuri asked his colleagues to vote against the bill because it “continues to traffic the big lie pushing this idea that last year’s election was somehow unduly influenced in 2020.”

However, Newton said the need for private funding is an “untrue premise.”

No county commissioners had come before the Legislature asking for funds reflecting the amount CTCL had given in private donations, Newton added.

Newton challenged that if the Koch family of Koch Industries, one of the largest privately owned companies in the United States with right-leaning political activism, had donated to local elections, Democrats would be just as apprehensive.

“The fact that they are not supporting eliminating private funds to elections is a tell that they see a partisan advantage in these private dollars,” Newton said.

Whether Democrat or Republican, Newton said one should be concerned that less than half of voters polled in North Carolina believe the 2022 election will be “free and fair.”

“Regardless of party, that should trouble everyone,” he said.

According to Dr. Andy Jackson, director of the Civitas Center for Public Integrity at the John Locke Foundation—an independent research institute in North Carolina that examines issues of freedom, personal responsibility, and limited constitutional government—partisan intent and effect in private election funding can’t be ignored.

“While CTCL gave both to Democratic-leaning and Republican-leaning counties in North Carolina, the 33 counties that CTCL funded backed Democrat U.S. Senate candidate Cal Cunningham 52.7 percent to 47.3 percent, while the other 67 counties, which were not provided ‘Zuck Bucks,’ supported Republican U.S. Senate incumbent Thom Tillis 54.6 percent to 46.4 percent,” Jackson told The Epoch Times.

“Regardless of whether the partisan bias in CTCL funding during the 2020 election in North Carolina was intentional, it existed.”

According to The North State Journal report, the amount the institute donated to North Carolina election boards comes to $116,624.

“Because most Republican-leaning counties tend to be small, there wasn’t a discernable partisan trend there,” Jackson said.

No matter what an organization’s intentions are, Jackson said it’s “bad practice” for one side or the other “basically making decisions about levels of funding in local elections.”

“That’s an arms race we do not want North Carolina to get into,” he said.