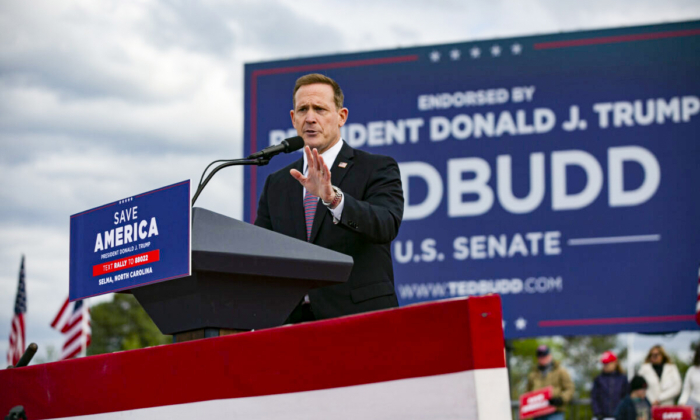 Ted Budd, who is running for U.S. Senate, speaks before a rally for former President Donald Trump at The Farm at 95 in Selma, North Carolina, on April 9, 2022. (Allison Joyce/Getty Images)
By Matt McGregor

Though the outcome of the midterms wasn’t the red wave that was predicted, a political analyst in North Carolina sees the statewide results as a victory for Republicans in the Tar Heel State.

There were seven statewide races: the U.S. Senate and six judicial races, with two of those races being in the North Carolina Supreme Court, both won by Republicans.

Budd was one of 126 Republican members of the House of Representatives who signed an amicus brief in support of Texas v. Pennsylvania, which was a lawsuit filed in the U.S. Supreme Court contesting the 2020 presidential election.

Where there was no red wave were regions affected by redistricting, he said.

“The House map left Republicans with one seat short of a supermajority, which they need to override the governor’s veto, and that was mainly due to the Republicans essentially agreeing to a host of amendments that Democrats offered during redistricting, and that pushed several seats in the Republican column,” Jackson said.

Republicans still won two seats in the Senate and seven in the House that lean Democratic, Jackson said.

“The state House was a good win, but not quite the supermajority, while the state Senate was a supermajority,” Jackson said. “The only place I can see where I think Republicans can be genuinely disappointed with the results is in North Carolina with the 13th congressional race between Democrat Wiley Nickel and Republican Bo Hines.”

The North Carolina Supreme Court race is significant, Jackson said, because of the two Republican wins that will change it from 4–3 Democratic to 5–2 Republican.

This could lead to rulings that wouldn’t have taken place under the current court, such as that allowing North Carolina felons who are still on parole, probation, or supervised release to vote.

Previously, felons had to complete their post-incarceration requirements before being allowed to vote.

“That decision would have probably been different with a 5–2 Republican court,” Jackson said.