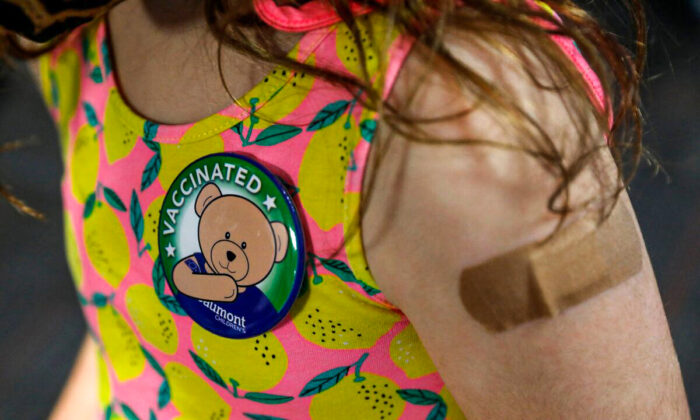 A child wears a pin she received after receiving her first dose of the Pfizer COVID-19 vaccine in Southfield, Mich., on Nov. 5, 2021. (Jeff Kowalsky/AFP via Getty Images)
Vaccines & Safety

A group of North Carolina physicians is calling for a halt to a hospital system’s COVID-19 vaccine trial on young children.

Atrium Health announced its clinical trial study on May 9. It said it would “evaluate safety, tolerability, and immune response to the vaccine among this age group.”

“Not only is this completely unnecessary, but it’s also toxic,” NCPFF co-founder Dianna Lightfoot told The Epoch Times.

According to an NCPFF press release (pdf), healthy children, teenagers, and young adults are at minimal risk of severe complications or death from COVID-19.

Using data from 12 countries, NCPFF reported that 0- to 19-year-olds have a median infection fatality rate (IFR) of 0.0013 percent, comparable to that of recent viruses with above-average severity.

The vaccines have been associated with a much larger number of deaths and adverse reactions in one year than all other childhood vaccines combined in the Vaccine Adverse Event Reporting System co-managed by the Centers for Disease Control and Prevention (CDC) and the Food and Drug Administration (FDA) over the last 31 years, NCPFF said.

“Even this high number of deaths probably under-reports by a factor of 20 to 44, according to two analyses,” NCPFF said.

Among adverse reactions that have been reported are myocarditis, an inflammation of the heart that causes the heart muscle to die, blood clots, and severe disability affecting the nervous system, NCPFF said.

NCPFF said the risk of heart complications from the vaccines among boys 12 to 15 years of age “is much higher than the risk they might have to be hospitalized because of COVID-19 itself.”

“Heart damage cannot be minimized as rare or mild. All forms of heart damage are serious and in children, the long-term consequences are not known and could be very serious if not fatal,” Dr. Peter McCullough, one of the world’s leading cardiologists, said in NCPFF’s press release.

There has also been an inadequate amount of time to determine long-term vaccine adverse events from the novel mRNA and viral DNA vector vaccines because the adverse events don’t show until several years after the introduction of the vaccine, NCPFF said.

NCPFF pointed to a CDC study that said 74.2 percent of children aged 0 to 11 already have natural immunity, which NCPFF said is demonstrated through over 150 studies to give “robust, long-lasting protection” against COVID-19.

“There is no rational argument or empirical data to justify administering these ‘warp-speed’ developed vaccines to young children who are at near-zero statistical risk for death or serious disease from the virus. To proceed with an experimental COVID vaccine to children is reckless and poses an unacceptable risk-to-benefit profile,” said Dr. Bose Ravenel, an NCPFF adviser board member with 37 years of experience as a pediatrician in private practice and 11 years as associate clinical professor of pediatrics at the UNC Department of Pediatrics from 1976 to 1987.

“Various hospital systems in North Carolina and the North Carolina Department of Health and Human Services have aggressively promoted vaccination against COVID-19 for minors and young adults, even though their risks associated with receiving the vaccine far exceed any potential benefit,” NCPFF said. “These vaccinations often have taken place without a legitimate informed consent process and occasionally without parental consent. Patients are often told that the vaccines are ‘safe and effective’ with no qualification.”

NCPFF also cited concerns over potential conflicts of interest regarding the entity funding the study, whether it be Pfizer itself or the federal government.

“Regardless of whether the study is funded by Pfizer or the federal government, the hospital system has potential conflicts of interest because both parties have strenuously sought to advance these vaccines for kids even though the risk of harm to kids is obviously much higher than any potential benefit from the vaccines,” NCPFF said.

“The hospital system is presumably paid and benefits financially from doing this. Academic medical centers that are part of hospital systems and that perform research studies receive copious amounts of monies from the federal government via reimbursements from Medicare and Medicaid, and from NIH grants for research studies,” it added.

By February 2021, there had been 1,291 reports of adverse events from the Pfizer vaccine listed in an appendix to a 38-page report (pdf) released by the FDA and Pfizer in March 2022.

Pfizer had been forced to release documents from their clinical trials to the public after a group of scientists and researchers sued the FDA under the Freedom of Information Act (FOIA). The FDA requested that the data related to the licensing of the vaccine be kept out of the public’s hands for 75 years, not to be released until the year 2096.

U.S. District Judge Mark Pittman in Fort Worth, Texas, ordered that the release of the 450,000-page document be made available to the public within eight months. The FDA was ordered to release 55,000 pages a month, allowing the public to have access to all the licensing documents by the end of September 2022.

Later, it was reported that Pfizer hired 600 additional employees because of a “large increase” of side effects linked to the vaccine.

Despite the array of listed side effects, Dr. Christine Turley, vice chair for research at Levine Children’s Hospital and principal investigator for the experiments on infants said in an announcement that the vaccine “has been shown to be very safe and effective in adults, adolescents, and school-age children.”

“We will be studying how well a lower dose works for young children in providing the level of protection they need,” Turley said. “We have every reason to believe this study will show the vaccine to be a strong option to offer children protection against the COVID-19 virus.”

Atrium Health did not respond to The Epoch Times’ request for a response to NCPFF’s call for a halt to the experiments and an answer on who is funding the experiments.

‘We Will Not Be Silenced’

“This is our hill we are willing to die on,” said Lightfoot.

Lightfoot co-founded the Winston-Salem-based organization with Dr. Weston Saunders after she returned from working as a senior policy adviser in global health for the White House during former President Donald Trump’s administration.

Lightfoot had begun meeting with North Carolina Lt. Gov. Mark Robinson and other physicians about creating a medical entity that would support medical freedom.

A group of 10 physicians met for the first time last year at Saunders’s Robinhood Integrative Health clinic in Winston Salem.

“These physicians were terrified they were going to lose their jobs,” Lightfoot said. “They knew people were dying needlessly, being told there was no treatment.”

While they wanted to keep their jobs, they couldn’t continue to watch what was happening, she said.

“There has been a mugging of the American people and a holding hostage of the medical community, so we wanted to find a platform on which we can build a large enough medical community to collectively call for informed consent and truth in practice,” she said.

That group of 10 became 300, and most recently, the organization had a fundraiser with Robinson, McCullough, and several state legislators attending the event in Chapel Hill.

In addition to calling for an end to vaccine experiments on babies, NCPFF is working with state and national groups to defend physicians from overreaching medical boards that have been suspending the licenses of physicians for prescribing treatments for COVID-19 such as ivermectin and hydroxychloroquine.

“These medical boards are trying to have their own truth committees,” she said.

The organization is also researching the corporate influence of “big pharma and insurance companies,” that has corrupted the practice of medicine, Lightfoot said.

“That’s an atrocity in itself,” she said.

The issue at hand has raised concern from doctors in other states, Lightfoot said, with many in the medical community asking how to know if the trials are taking place in their region.

“Our goal is to bring attention to this because this is just one of the many places that are experimenting on babies,” Lightfoot said. “We want it stopped.”

The trials are justified by the often-repeated slogan “safe and effective,” Lightfoot said, while the public is persuaded to subscribe to that narrative.

“All too often people have been cowed into a corner being told, ‘Don’t look at this,’” she said. “But we will not be silenced.”

Carolyn Hendler and Zachary Steiber contributed to this report.