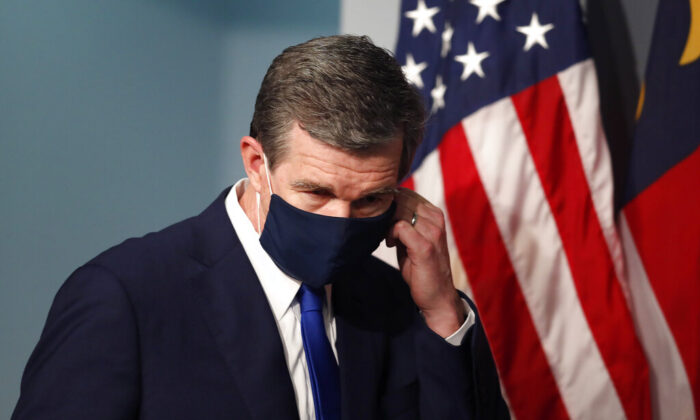 Gov. Roy Cooper prepares to take off his mask before speaking during a briefing at the Emergency Operations Center in Raleigh, N.C., on July 9, 2020. (Ethan Hyman/The News & Observer via AP)
Regional News

North Carolina Gov. Roy Cooper has vetoed a measure proposing to restore checks and balances to his executive powers, which have been extended amid the CCP virus pandemic.

“North Carolina is emerging from a global pandemic with lives saved and a strong economy because of effective statewide measures to protect public health under the Emergency Management Act,” the Democrat said about his Nov. 1 veto.  “Critical decisions about stopping deadly diseases, or responding to any other emergency, should stay with experts in public health and safety, not a committee of partisan politicians.”

Cooper declared a state of emergency in response to the CCP (Chinese Communist Party) virus pandemic in March 2020, a decision that heralded a year of lockdowns throughout the state and country.

The Emergency Powers Accountability Act (EPAA), or House Bill 264, would have required Cooper to get “concurrence of the Council of State” before “exercising certain authorities.”

The Council of State consists of bipartisan senior executive offices such as the lieutenant governor, attorney general, agriculture commissioner, and the secretary of state.

The bill would have created a definition for the concurrence of the Council of State under the EPAA, which would clarify how Cooper proceeds in seeking concurrence before acting.

“The legislature delegated some power to the executive to act in an emergency because the executive can act immediately,” state Sen. Bill Rabon, a Republican, said about the veto. “Eighteen months into this pandemic, nobody can argue with a straight face that it’s a time-limited ‘emergency’ where the General Assembly does not have time to act. The governor needs to accept that this state must return to its normal system of government.”

Republican House Speaker Tim Moore said that during the time of emergency, many have felt that individual liberties have deteriorated because of “extreme mandates and policies” made unilaterally by Cooper.

“I’m disappointed that Governor Cooper is blocking a bill that simply allows for checks and balances, not just for him, but any governor, Republican or Democrat, in the future,” Moore said.

Republican Rep. Keith Kidwell, one of the bill’s sponsors, said the bill proposed to address the “endless duration of power” that Cooper “has been granted” during a “self-declared and boundless state of emergency.”

Republican House Majority Leader John Bell, another sponsor of the bill, criticized what he said was a lack of oversight that allowed Cooper to declare and extend the state of emergency without input from the Council or the General Assembly.

“No one person, regardless of party, should have the unilateral authority to shut down the state for an indefinite amount of time,” Bell said. “This legislation is not about politics or what the governor has or has not done. It is about clarifying the law to restore checks and balances.”