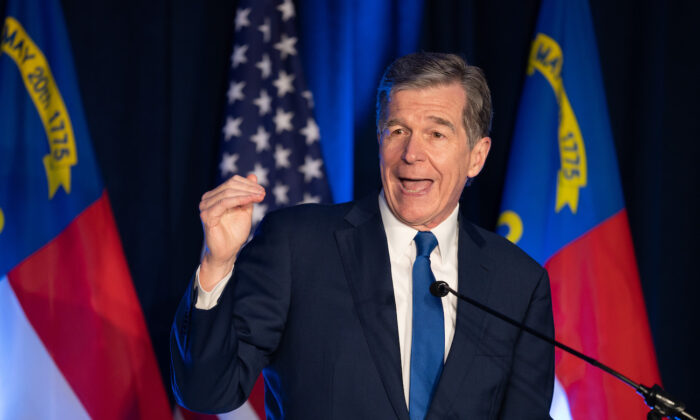 North Carolina Governor Roy Cooper speaks to the crowd during an election night event in Raleigh, North Carolina, on May 17, 2022. (Sean Rayford/Getty Images)
US News

Roy Cooper, the governor of North Carolina, signed an executive order on July 6 to continue enabling access to abortion in the state and shield people criminally charged with performing the procedure from being extradited to other states.

His action comes after the U.S. Supreme Court on June 24 struck down Roe v. Wade in a case involving an abortion law in Mississippi. Roe v. Wade had largely enabled abortions up to 24 weeks of pregnancy across the United States for nearly 50 years. The overturning of Roe returns regulation of the procedure back to the states.

Colorado Gov. Jared Polis, a Democrat, also signed an executive order similar to Cooper’s on July 6. Other Democratic governors, including for Maine and Rhode Island, on July 5 made similar moves to shield patients and providers of abortions from penalties. Over in Massachusetts, Gov. Charlie Baker signed a similar executive order on the day Roe v. Wade was overturned.

In North Carolina, abortions are legal until fetal viability, which typically falls between 24 and 28 weeks of pregnancy. An abortion can be still performed after that in the case of a medical emergency, to protect the life or health of the mother. Abortions done for the purpose of sex selection are prohibited.

Cooper’s executive order (pdf) states that people who provide or receive “reproductive health care services that are legal” in North Carolina will not be imposed civil or criminal penalties by the Cabinet agencies or people under the governor’s office.

“Reproductive health care services” is defined in the document as including abortions.

Cooper’s order states that Cabinet agencies shall coordinate to “protect people or entities who are providing, assisting, seeking, or obtaining lawful reproductive health care services in North Carolina.” The order also directs the Department of Public Safety (DPS) to work with law enforcement to prohibit anyone from blocking access to a health care facility, per state law.

Cabinet agencies are also barred from requiring a pregnant state employee to travel to a state “that has imposed restrictions on access to reproductive health care services if those restrictions do not include an exception for the health of the pregnant Cabinet Agency employee satisfactory to that employee.”

It also says that the Cabinet agencies will not help with “any investigation or proceeding that seeks to impose civil or criminal liability or professional sanction upon a person or entity for” providing or receiving reproductive health care services that are legal in North Carolina.

While North Carolina law states that it is the governor’s “duty” to arrest and deliver any person charged in another state “with treason, felony or other crime, who has fled from justice and is found in this state,” Cooper’s executive order says the governor can “exercise his discretion to decline requests” to extradite anyone charged with a criminal violation in another state over carrying out or receiving “reproductive health care services that are lawful in North Carolina.”

Reaction to Overturning of Roe

In a statement issued on July 6, Cooper painted the action of the Supreme Court as having “ripped away the constitutional right to reproductive freedom that women have relied on for five decades.”

“For now, it’s up to the states to determine whether women get reproductive health care, and in North Carolina they still can, thanks to my veto and enough legislative votes to sustain it,” he said.

Cooper warned the midterm elections will be crucial in preserving abortion access, as his veto power could be nullified by a Republican supermajority. Republicans are currently three seats shy of a supermajority in the House and two seats shy in the Senate.

On a call with President Joe Biden and eight other Democratic governors on July 1, Cooper said North Carolina abortion clinics have already seen an influx of out-of-state patients since the Supreme Court ruling.

Alexis McGill Johnson, president of Planned Parenthood Action Fund, was alongside Cooper at the signing of the executive order. She said in a statement that North Carolina has become “an increasingly critical access point” for people traveling to obtain abortions, including from South Carolina and Tennessee.