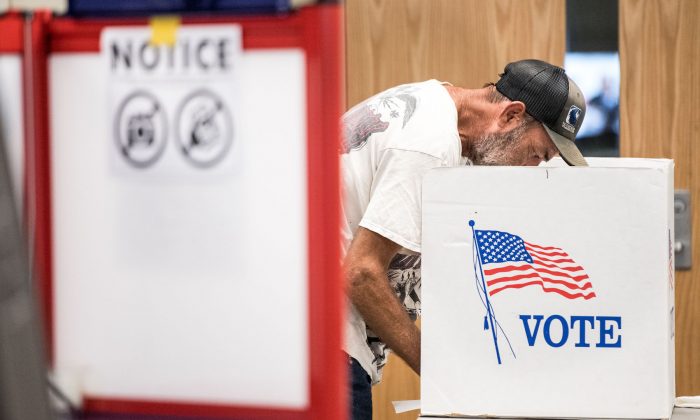 Records that show foreigners registered to vote—and actually voted in North Carolina elections—will be disclosed by the state’s board of elections as a result of its legal settlement with an electoral integrity group.

The Jan. 31 announcement that a settlement (pdf) had been reached came weeks after Garbant Piquant of Garner, North Carolina, was arrested and charged with falsely claiming to be a U.S. citizen in order to register to vote, voting by an alien, and passport fraud.

Authorities say the Bahamas native, who isn’t a U.S. citizen, voted in every primary and general election from 2018 through 2020, as The Epoch Times previously reported.

The legal complaint against the North Carolina State Board of Elections and Executive Director Karen Brinson Bell was filed on June 17, 2019, and later amended.

According to the Public Interest Legal Foundation (PILF), which brought the lawsuit to federal court in North Carolina, the settlement is a victory for transparency in elections.

The National Voter Registration Act (NVRA) provides that election officials must allow inspection of all records related to the maintenance of the voter rolls.

The elections board agreed to settle the case after a federal appeals court determined that the disclosure provision of NVRA requires states to “make available for public inspection … all records concerning the implementation of programs and activities conducted for the purpose of ensuring the accuracy and currency of official lists of eligible voters.”

“This is a huge win for transparency in North Carolina’s elections,” PILF President J. Christian Adams said in a statement provided to The Epoch Times.

“The public has a right to know about election vulnerabilities.”

“These records conclusively show that foreigners have been registering to vote and voting in North Carolina elections. It is a shame our efforts to disclose these records were met with such resistance by election officials.

“Real foreign interference in American elections happens when foreigners cast ballots. This victory demonstrates that changes to national voter registration policies are needed to prevent this from happening,” he stated.

Along the way to the settlement, the foundation’s legal complaint was dismissed by a U.S. district court.

PILF appealed to the U.S. Court of Appeals for the 4th Circuit, which ruled in favor of the group on May 10, 2021, and reinstated the lawsuit, remanding the case to the district court “for further proceedings consistent with this opinion.”

Federal Circuit Judge Barbara Milano Keenan, who was appointed by then-President Barack Obama, wrote in her court opinion that the district court had erred in tossing the lawsuit for failing to state a valid claim under the NVRA given what she called “the sensitive nature of the information sought and the potential for abuse,” an apparent reference to information about innocent U.S. citizens that could be abused.

The lower court was wrong to dismiss the case at an early stage in the litigation before discovery had been conducted, Keenan wrote.

The Indianapolis-based foundation characterizes itself as “the nation’s only public interest law firm dedicated wholly to election integrity,” saying that it exists “to assist states and others to aid the cause of election integrity and fight against lawlessness in American elections.”

PILF boasts that it has been “uncovering government records showing foreigners voting across the United States including in Pennsylvania, Texas, New Jersey, and California.”

The group is currently suing in Pennsylvania to secure records involving “a multi-decade failure to prevent aliens from registering and voting there.”

Patrick Gannon, public information director for the North Carolina board of elections, offered the board’s perspective on the settlement, which it had unanimously voted to accept on Jan. 20.

The settlement requires the board to give PILF records concerning audit processes and list maintenance activities related to non-U.S. citizens, in exchange for a complete dismissal of the lawsuit, Gannon said in a statement responding to an inquiry by The Epoch Times.

It’s important that the settlement states that the board “may redact all information that would allow PILF to personally identify any individual registrant who was being reviewed for potential improper registration, including names, dates of birth, Social Security numbers, driver’s license numbers, phone numbers, email addresses, street addresses, signatures, and identifying numbers used for registration and voting purposes,” Gannon wrote.

PILF sought to obtain this personal information in the litigation, he added.

The board’s “goal all along was protecting the privacy of individuals who were only suspected of improper registration,” Gannon wrote, adding that most of those individuals were found to be properly registered citizens.

Both a federal district court and the 4th Circuit Court rejected PILF’s argument that it should obtain such personal information, he said, providing a link to the circuit court opinion written by Keenan (pdf).

The elections board will provide the records but will redact all personally identifying information, as well as pay PILF $5,000.

It couldn’t release the records previously because at the time a federal judge had ordered it not to do so, Gannon wrote.

The settlement agreement “explicitly disclaims that the state board violated any law.”