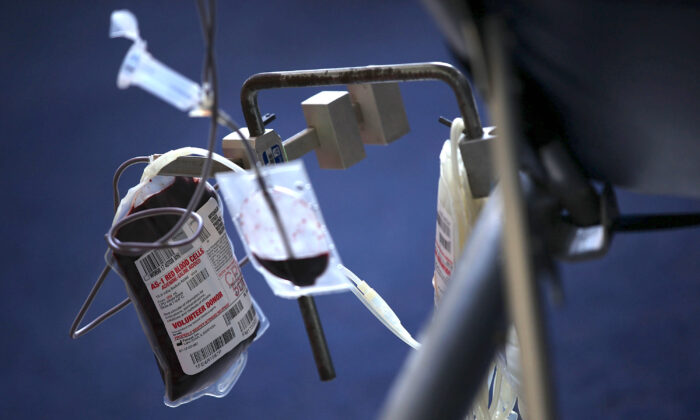 Blood is collected from a donor into a bag during a blood drive on Capitol Hill in Washington, DC on June 20, 2017. (Alex Wong/Getty Images)
By Allan Stein

Swiss naturopathic physician George Della Pietra believes that people worldwide should be free to choose whether to get a COVID-19 vaccine injection.

He believes that the same should hold for those receiving transfusions with “vaccinated” blood.

“The problem is right now we have no choice,” said Della Pietra, founder of the nonprofit SafeBlood Donation service, which matches unvaccinated blood recipients with donors in 65 countries.

“It was very clear from the beginning that the COVID hype was way out of control,” Della Pietra said. “It was not as dangerous as they say it was.

“As a naturopath, I can make no sense of this pandemic, which was never really a pandemic. It leaves space for so many explanations.”

Della Pietra believes that an mRNA injection is more dangerous than pharmaceutical companies are willing to admit. He said the growing numbers of adverse reactions are reason to question their safety and effectiveness.

Data from the Centers for Disease Control and Prevention show that vaccinated and boosted people made up 58.6 percent (6,512) of the COVID-19 deaths in August—up from 41 percent in January.

“We can no longer say this is a pandemic of the unvaccinated,” Cynthia Cox, vice president of the Kaiser Family Foundation, told The Washington Post in an article on Nov. 23.

Nearly 70 percent of the world’s 8 billion people have received at least one mRNA injection for COVID-19 since the vaccines began rolling out in 2021 at the height of the virus’s spread.

Each of the three primary mRNA COVID-19 vaccines contains COVID-19 “spike protein” fragments, which bind at the cellular level to stimulate an immune response to the virus.

“I’ve never seen anything similar—and I’m not talking only about spike proteins,” he told The Epoch Times in a phone interview.

“It’s unbelievable because we never had this problem before. It’s been only two years. They want to keep the narrative [that an mRNA vaccine] is not dangerous.”

Although donated blood and plasma must undergo a cleansing process before transfusion, SafeBlood Donation says this isn’t enough to remove all mRNA ingredients.

“I’m talking about graphene oxide and nondeclared inorganic components in the vaccine, which we can see in the blood. When I see them, I have no idea how we can get rid of them again,” Della Pietra said.

Looking at the abnormalities in vaccinated blood, he said, “OK, we have a problem.” People are receiving the vaccine “more or less through the back door.”

“You can not avoid it anymore, “Della Pietra said.

In the United States alone, there are approximately 16 million units of donated blood annually. Of those units, about 643,000 are “autologous”—self-donated—and the number is increasing yearly, according to BloodBook.com.

Della Pietra said, to his knowledge, Safe Blood Donation, based in Switzerland, is the first unvaccinated blood donation service of its kind.

“So, there is no blood bank with mRNA-free blood yet, not even with us,” Safe Blood Donation stated on its website.

“And, although we have already asked hundreds of clinics, at the moment—at least in Europe—all of them still refuse to allow the human right of free blood choice with them—or at least do not want to be mentioned because otherwise, they fear reprisals.”

Della Pietra said the main goal of Safe Blood Donation isn’t to start an mRNA-free blood bank. Rather, it’s to make it possible to match unvaccinated blood donors and unvaccinated recipients, “which we bring together in a clinic (medical partner) that allows the choice of blood donor.”

Medical website Seed Scientific stated that blood banks and biotech companies will offer as much as $1,000 monthly for blood donations.

“This is why I decided to do [SafeBlood Donation]. I wanted to make a network for unvaccinated people looking for a blood donor because they need it—whether they have scheduled surgery or an emergency,” he said.

SafeBlood Donation began working in the United States about a month ago, building an infrastructure of medical partners.

However, in the current medical environment, central blood banks such as the Red Cross don’t segregate their blood donations based on their vaccinated or unvaccinated status.

“The American Red Cross does not facilitate designated donations for standard blood needs, as this process often takes longer and is more resource intensive than obtaining a blood product through our normal process,” the Red Cross told The Epoch Times in an email.

“We want to emphasize that the Red Cross adheres to all donor and product requirements as determined by the FDA to ensure the safety of the blood supply and is committed to continuing to provide life-saving blood products for patients across the country.”

The National Library of Medicine stated that “across study sites, the average hospital cost per unit transfused was $155 and the average charge per patient was $219.”

On the contrary, “blood saves and improves the lives of millions of individuals every year.”

The organization also provides an autologous blood donation service for clients who wish to store their blood for themselves or their friends and relatives.

Vitalant, a nonprofit blood donation collector and provider, “does not directly interact with patients, so we cannot offer any insight on how frequently hospital patients may make such requests” for unvaccinated blood, said Liz Lambert, strategic communications manager at Vitalant.

The Food and Drug Administration, which sets blood safety standards in the United States, “does not require blood product labeling to differentiate between donors who have or have not been vaccinated,” Lambert told The Epoch Times.

The World Health Organization is seeking the authority to determine global health policy against future pandemics, which includes the standard use of mRNA vaccines.

Della Pietra said this is an insidious sign of what’s to come as quantities of unvaccinated blood supplies become shorter and more costly to procure.

“It will become rarer,” said Della Pietra, who wants people to have a choice—”the same choice we had 10 years ago.”