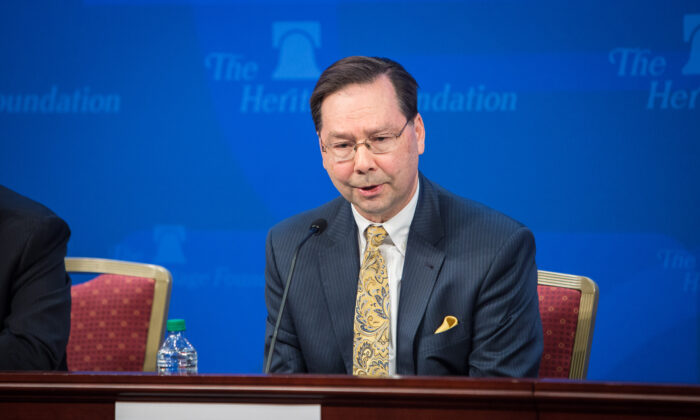 Hans von Spakovsky, manager of the Election Law Reform Initiative at the Heritage Foundation, at an immigration event in Washington in this file photo. (The Epoch Times)
Election Integrity

The recent New York City law to allow at least 800,000 noncitizens to vote in municipal elections is unconstitutional and likely to be overturned in court, said Hans von Spakovsky, manager of the Heritage Foundation’s Election Law Reform Initiative and former member of the Federal Election Commission.

“It’s actually pretty clear that it violates the New York state Constitution—it has a provision that specifically says that you have to be a citizen to vote in all elections in the state of New York, and that includes local elections,” Spakovsky told The Epoch Times on Jan. 19.

“I also think it is bad from a policy point of view, because it basically cheapens and diminishes the concept of citizenship.

“It ought to be something that makes American citizens mad, particularly because of the potential number of aliens that’s involved.”

New York City Mayor Eric Adams allowed the measure to become law on Jan. 9, which includes the provision that voting noncitizens must be in the city for 30 days or more and have authorization to work.

“I believe that New Yorkers should have a say in their government, which is why I have and will continue to support this important legislation,” Adams said in a statement. “I believe allowing the legislation to be enacted is by far the best choice, and look forward to bringing millions more into the democratic process.”

“Does anybody really believe that the election department is going to investigate the lawful status of any alien who registers to vote?” he said.

“And so that means, of course, that lots and lots of illegal aliens will also get registered to vote.”

Although he doesn’t think any states will try to change their election laws to include voting rights for noncitizens, Spakovsky said there’s a push from the progressive left to change the concept or definition of “citizen.”

“The whole point of the open borders crowd is to do two things: one, extinguish the line between legal and illegal aliens in this country. And second, to frankly get rid of the whole concept of citizenship,” he said.

New York City Councilwoman Margaret Chin, a Democrat, told colleagues before the recent vote that many noncitizens struggle to become citizens but should still be able to vote in the meantime because they pay taxes and live and work in the city.

However, Spakovsky said paying taxes doesn’t make someone a citizen.

“My response to that is that first of all, the vast majority of illegal aliens do not pay taxes. In fact, they get free rides from many jurisdictions,” he said.

“This is being pushed by the progressive left today because they believe that aliens will vote for them … and keep them in power.”

Spakovsky said the inability of the Trump administration to get a question placed on the 2020 Census about citizenship status was a major win for the progressive left to blur the lines between citizen and noncitizen.

“That’s why California probably has four or five more congressional seats than they should have, because of the huge population of illegal aliens in the state.”

The Biden administration supports the creation of a citizenship pathway for millions of illegal immigrants in the United States. A decade-old estimate puts the number of illegal aliens at 11 million, and since then, millions more have crossed the southern border.