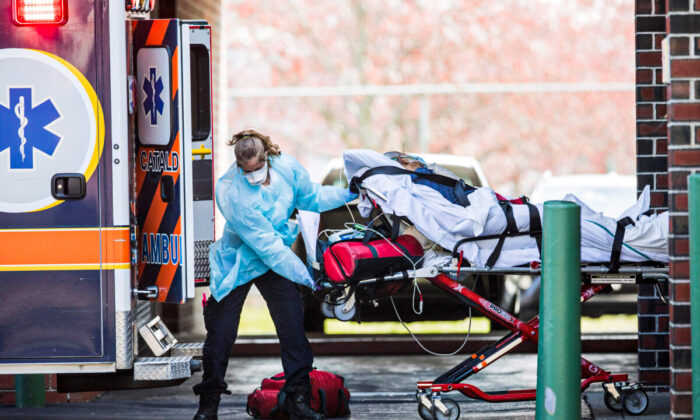 First responders load a patient into an ambulance from a nursing home where multiple people have contracted COVID-19 in Chelsea, Mass., on April 17, 2020. (Scott Eisen/Getty Images)
US News

The increase in deaths not attributed to COVID-19 in the working-age population during the summer and into the fall of last year affected white-collar workers more than blue- and grey-collar employees, according to life insurance data.

As The Epoch Times previously reported, prime-age mortality was particularly elevated in the 12 months ending in October 2021, where there was an excess death spike of more than 40 percent in ages 18–49, compared with the same period in 2018–2019, based on death certificate data from the Centers for Disease Control and Prevention (CDC). The majority of the excess deaths weren’t attributed to COVID-19.

A recent study by the Society of Actuaries, an international professional organization, corroborates the CDC data. It relies on a survey of group term life insurance providers that yielded data on claims made from 2017 to 2021 and reported to insurers by Sept. 30, 2021 (pdf).

The life insurance data show an increase in excess mortality since the second quarter of 2020, along with the COVID-19 pandemic, including a particularly sharp increase in the third quarter of 2021—39 percent above what would have been expected based on 2017–2019 data. That quarter was exceptionally devastating for age groups 25–34, 35–44, 45–54, and 55–64, in which mortality soared 81 percent, 117 percent, 108 percent, and 70 percent, respectively, above the baseline.

Among industries with the largest number of COVID-19 deaths, the worst hit was public administration with nearly 13,000 life insurance claims related to the disease. Yet those only accounted for less than 52 percent of the sector’s excess mortality.

By contrast, in heavy and steel manufacturing mortality rose by 9 percent, with COVID-19 more than accounting for the entire spike. In fact, non-COVID-19 mortality dropped by a few percent in this sector.

The insurance data aren’t directly comparable to the CDC data because the population covered by group life insurance policies differs from the general population. Since the policies are commonly offered by employers, the overall population weighs disproportionately toward working-age adults.

The study didn’t go into detail on non-COVID-19 causes of the excess deaths.

While the CDC hasn’t yet released fully detailed cause-of-death data for the recent period, a previous analysis by The Epoch Times, informed by conversations with state authorities and experts, revealed several potential causes of the excess mortality, including undercounted COVID-19 deaths, drug overdoses, alcohol-related disease, and injuries possibly caused by COVID-19 vaccines.