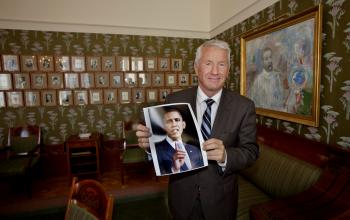 Has Awarding the Nobel Peace Prize to Barack Obama Tarnished Its Image?

That depends on who one asks and who one listens to. On Friday, Oct. 9, the Nobel Committee announced that U.S. President Barack Obama had been awarded the 2009 Nobel Peace Prize “for his extraordinary efforts to strengthen international diplomacy and co-operation between peoples.” This was to the surprise of nearly everyone around the world, including Mr. Obama himself, who was most humble in his acceptance speech.

It is now known that Mr. Obama was nominated for the Nobel Peace Prize after being in office as president for only 11 days and that he has served for fewer than 10 months. Many people, including many of his supporters, believe that giving the Nobel Prize to Mr. Obama at this stage in his presidency was premature.

Before the Nobel Prize was announced, Zimbabwe’s Prime Minister Morgan Tsvangirai was the leading contender. In a way, these two individuals represent two ends of the spectrum as far as deciding what kind of person is most deserving—Mr. Obama’s lofty rhetoric of hope and inspiration as opposed to Mr. Tsvangirai’s time in the trenches to bring about his accomplishments in Zimbabwe.

The Nobel Peace Prize has often been steeped in controversy. The prizes given to Theodore Roosevelt, Woodrow Wilson, Shimon Peres, Yitzhak Rabin, Yasser Arafat, Le Duc Tho, Henry Kissinger, Mikhail Gorbachev, and Jimmy Carter have been much debated. The shared Kissinger-Tho award even prompted the resignations of two dissenting committee members.

The list of omissions is also notable. Such luminaries as Mahatma Gandhi, Eleanor Roosevelt, Liu Xiaobo, and Pope John Paul II were all passed over for the Nobel Peace Prize.

It goes without saying that awarding something as subjective as the Nobel Peace Prize is going to generate controversy. The problem this time revolves around the criteria used to decide this year’s winner. Generally, the Nobel Prize is awarded for actual accomplishments made by the recipient.

This year, the committee took a different tact based on the unique global environment the world faces. The committee decided that Mr. Obama was most deserving of the award for the hope his speeches have instilled in people around the world for change—change in the way the United States deals with the rest of the world, change in its own internal situation, and change as opposed to the Bush administration’s policies.

Mr. Obama, for example, has promised a policy of engagement and communication rather than confrontation and threats; a winding down in Iraq rather than a ramping up of the war; stopping illegal interrogations and all forms of torture rather than justifying such human rights abuses—this includes signing an order to shut down the infamous Guantanamo Bay facilities, even though such plans have hit a snag; extending a hand to the Muslim world to work together, rather than being confrontational; taking a firm stance on peace in the Middle East; and dealing with global warming.

The West is still at war in Iraq and Afghanistan may see a ramping up of action—the Middle East is still without peace. North Korea remains belligerent and Iran continues to pursue its nuclear program. There has been movement on all these fronts.

The hope that Mr. Obama has instilled in people around the world cannot be overestimated in these times of uncertainty. The global economic crisis is showing signs of abating, North Korea has said it will resume nuclear talks, Iran has modified its nuclear stance to a less threatening position, Europe is far more amenable toward the Obama administration than the Bush administration, and there is more openness with Asia.

China’s so-called “socialist democracy” is still a huge unknown, however. Although its economy has become pivotal in the larger global economic picture, particularly for countries like Australia, whose economy is largely driven by resource sales to China, the People’s Republic of China remains an authoritarian state where no dissent is tolerated—no dissent politically, ideologically, or in any other way.

Millions of Chinese citizens remain locked up in jails or in hard labor camps, in mental hospitals, or under house arrest often for nothing more sinister than their beliefs. Targeted groups like Falun Gong, underground Christians, Uyghur Muslims, democracy activists, lawyers, journalists, etc. suffer unspeakable crimes against them. These are issues the world will have to address and not simply push under the carpet, and all of these issues will be a major challenge to Mr. Obama, particularly now that he is a Nobel laureate.

The Internet is rife with comments from both detractors and supporters. Republicans probably represent the most vocal group against Mr. Obama’s receiving this award, but even some of his supporters feel this may not have been the time. Most Nobel laureates have at least publicly praised the committee’s decision, but this choice has already been added to the list of controversial decisions that have been made in the past.

Who is right? There is no simple answer. One problem is that many say the process has become politicized. Accusations abound that Mr. Obama was given the prize as a reaction to Bush administration policies, which were roundly rejected by many European governments, and this amounts to a “poke in the eye” to the conservative Republican agenda. There may well be some truth to this. Regardless, the committee chose Barack Obama, perhaps the most dynamic and charismatic leader to come along for many years, for his message of hope and inspiration.

Mr. Obama’s challenge now is to bring this inspirational rhetoric to fruition, to actually “walk the talk.” If his administration can help accomplish the problems addressed in his acceptance speech, then history will laud him. This is an onerous burden and only time will reveal the outcome.