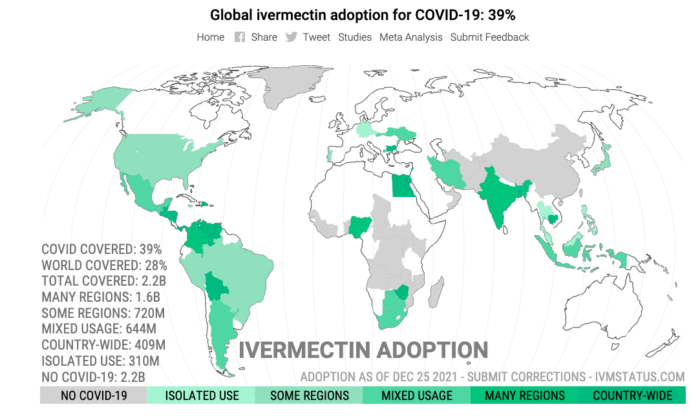 Screenshot of countries where ivermectin is used for COVID-19. (ivmstatus.com/screenshot via The Epoch Times)
Health News

The New Jersey pharmaceutical company supplying ivermectin to a UK trial that was paused for a short period of time, says there are no supply issues with its pills.

Ivermectin is being investigated as part of the government-backed Platform Randomised Trial of Treatments in the Community for Epidemic and Pandemic Illnesses (PRINCIPLE) in the United Kingdom as a possible home treatment for COVID-19, the disease caused by the CCP (Chinese Communist Party) virus. The trial was put on hold due to “temporary supply issues” as reported by Medpage Today on Dec. 14.

Details were not provided on the cause of the supply issues. The trial’s joint chief investigator, professor Chris Butler, and the trial’s press team declined to comment and respond to a query asking when the supply issue is expected to be resolved.

The Epoch Times also reached out to Torbay and South Devon NHS Foundation Trust in England—one of two organizations responsible for QP (quality person) release, importing, and, labeling of ivermectin in the trial—but did not receive a reply.

Daniel Worley Jr., Vice President of Business Development and Associate General Counsel of Edinbridge Pharmaceuticals, the manufacturer supplying the medicine, told The Epoch Times in an email that the company “is not experiencing any supply issues related to its ivermectin tablets (3mg) product.”

The company’s ivermectin tablets were added to the World Health Organization’s (WHO) Prequalified Medicines List last year in September, which ensures that a medicine meets “acceptable standards of quality, safety, and efficacy” for international procurement agencies to purchase and distribute in “resource-limited countries.” The list is part of the United Nation’s Prequalification of Medicines Programme and is run by the WHO.

When PRINCIPLE announced its ivermectin trial in June 2021, Butler, the co-chief investigator, said the drug was safe and readily available, suggesting that there was an appropriate supply of the drug.

“Ivermectin is readily available globally, has been in wide use for many other infectious conditions, so it’s a well-known medicine with a good safety profile, and because of the early promising results in some studies it is already being widely used to treat COVID-19 in several countries,” Butler said in a news release.

Several doctors questioned the sudden pause on the PRINCIPLE trial as a result of the ivermectin supply.

Dr. Tess Lawrie, director of the Evidence-based Medicine Consultancy, said the supply issue cited was “plainly ridiculous.” The WHO is one of Lawrie’s company’s clientele.

“To cite supply issues is plainly ridiculous,” Lawrie told The Epoch Times via email. “We are talking about a most abundant off-patent medicine that is produced in many countries around the world. There are many European manufacturers too, including Huvepharma in Bulgaria.”

Chief of the Division of Pulmonary and Critical Care Medicine at the Eastern Virginia Medical School Dr. Paul Marik said the reason given by PRINCIPLE was “nonsense.”

“It’s clear this is an ominous plot. A supply issue with IVERMECTIN; you must be kidding,” Marik told The Epoch Times in an email. “After 3.7 BILLION doses have been dispensed in the last 2 decades; we have a supply issue; what nonsense.”

Marik is also the co-founder of a medical organization called the Front Line COVID-19 Critical Care (FLCCC) Alliance that has developed several COVID-19 treatment protocols using ivermectin as “a core medication in the prevention and treatment” along with other medicines that are federally approved, “inexpensive, readily available, and have been used for decades with well-established safety profiles.”

Dr. Robert Malone, the inventor of the messenger RNA vaccine technology, says that it is unlikely there is a shortage of ivermectin, alleging the Oxford University team was either lying or incompetent.

“The first thing you do before you launch the study is you lock down your trial supply so that one completely fails the sniff test,” Malone said on Fox’s “The Ingraham Angle” show.

“Either they’re grossly incompetent at the University of Oxford or lying. It’s one or the other because [the] worldwide supply of ivermectin is enormous, and there’s no way that a competent clinical research team would not have locked down their trial supply.”

The Oxford University trial team did not reply to The Epoch Times’ request for comment.

The U.S. Food and Drug Administration (FDA), the WHO, and the European Medicines Agency advises against the use of the anti-parasitic drug for COVID-19, claiming that more data are needed on its effectiveness and safety. Still, some countries like Mexico and Uttar Pradesh, India, widely made ivermectin available as part of their treatment protocol to treat COVID-19.

Proponents of the drug say that the oral FDA-approved ivermectin formulation for humans, which comes in tablet forms, has a high safety profile. About 4.4 billion doses of the medicine (renamed Mectizan) have been administered in 49 countries to treat river blindness and lymphatic filariasis since 1987. In 2020 alone, “a total of 417 million Mectizan treatments were approved,” according to the Mectizan Donation Program (pdf).

According to the National Institutes of Health (NIH), ivermectin is “generally well tolerated” with minimal side effects that include dizziness, nausea, or diarrhea. The NIH neither recommends for nor against the use of ivermectin for COVID-19.

He also wrote in his analysis (pdf) that, “The present extensive review of adverse events reportedly associated with ivermectin treatment for [the] therapeutic or prophylactic purpose did not reveal any significant cause for concern. … In fact, adverse events were mainly mild to moderate and infrequent.”