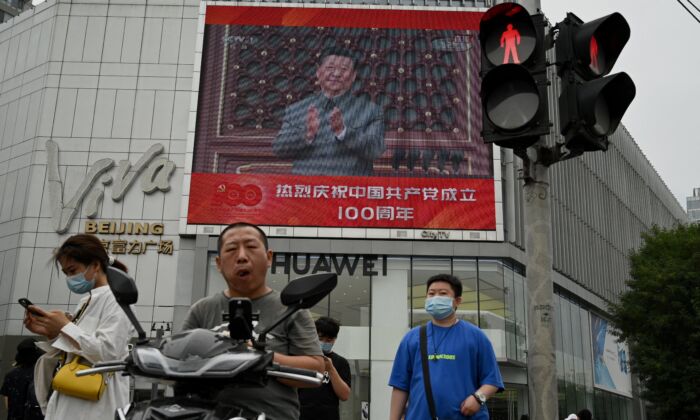 People walk in front of a large screen showing Chinese leader Xi Jinping giving a speech during celebrations to mark the 100th anniversary of the founding of the Chinese Communist Party in Beijing, China on July 1, 2021. (Noel Celis/AFP via Getty Images)
Chinese Regime

Chinese leader Xi Jinping changed his “wolf warrior” tone to “cooperation” and “fusion” with other countries at a July 16 virtual conference with U.S. President Joe Biden, Russia’s Vladimir Putin, and other world leaders of the Asia-Pacific trade group APEC.

“We should tear down the walls [barriers between countries], instead of building walls. We should open up the borders instead of isolating. We should fuse [with each other], instead of decoupling,” Xi said. “Cooperating and achieving win-win results are the unique right way.”

In this latest speech, Xi didn’t mention the topics previously mentioned almost every time when he delivered messages overseas, such as the Chinese regime’s ambition “to shape mankind’s common future,” his criticism of Western countries “trying to teach China” by pointing out China’s human rights issues, and his threat of bashing the heads of foreign powers if they confront Beijing.

Yang Wei, a political commentator on China, analyzed that the Chinese regime’s aggressiveness has angered some of the powerful countries in the world and now they’re trying to regain support, in his latest commentary published in the Chinese-language Epoch Times on July 16.

The Asia-Pacific Economic Cooperation (APEC) is an intergovernmental forum founded in 1989 to promote free trade throughout the region. Now, the organization has 21 member economies in the Pacific Rim, and Friday’s meeting was chaired by New Zealand.

The main subject of the APEC meeting was solutions to the COVID-19 pandemic. Xi delivered a speech focused on cooperation with other countries to a larger degree, rather than limiting it to vaccines.

“Opening the border and interacting with each other is the general trend. We should promote the freedom of trade and investment, and make it easy. Then we can safeguard the multilateral trading system with the World Trade Organization at its core,” Xi said.

The Chinese regime has strict control and limitations on foreign investment and practices unilateral trade. In the speech, Xi didn’t mention when the regime would lift these barriers or plan to build a system as free as the West.

Xi then urged the countries “to strengthen our economic and technical cooperation.” On this topic, he claimed that China would be happy to share its experience of eradicating poverty. China claimed that it eradicated poverty in 2021. But studies show that severe poverty still exists in China.

Xi said his authorities would like to help other APEC member states to develop a “digital economy” and “Smart Cities.” Such plans include a pervasive surveillance system designed and developed in past decades by Beijing authorities with the purpose of surveilling and controlling people.

On the topic of the pandemic, Xi urged for a waiver on vaccine intellectual property rights, which would allow China to obtain the Pfizer, Moderna, and Johnson & Johnson vaccines at no cost and be able to reproduce them.

As an exchange, Xi would like to share with the world how China’s COVID-19 vaccines are made.

Pfizer’s vaccine is verified to generate 10 times more antibodies than China’s CoronaVac, according to research done by a Hong Kong group that was published in The Lancet Microbe on July 15.

Xi delivered this speech by playing a pre-recorded video, according to the White House spokeswoman Jen Psaki.

At the end of the July 16 APEC meeting, the world leaders agreed to “accelerate equitable access to safe, effective, quality-assured, and affordable COVID-19 vaccines,” which might overcome the tame outbreak exacerbated by the Delta coronavirus variant.