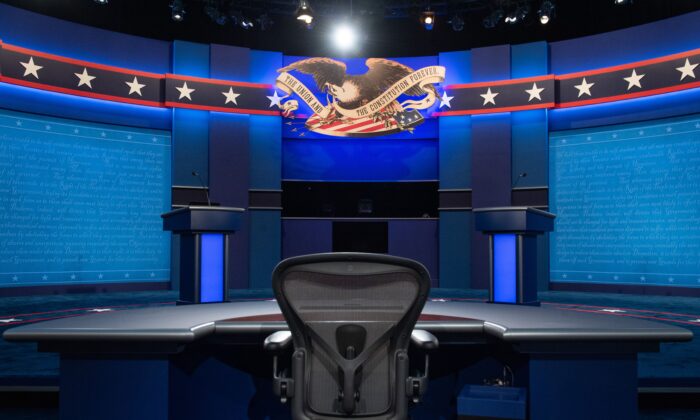 The stage of a Presidential debate at Case Western Reserve University and the Cleveland Clinic in Cleveland, Ohio, on Sept. 28, 2020. (Saul Loeb/AFP via Getty Images)
Viewpoints

Our country desperately needs a new kind of political debate. What we have now are exercises in (often extreme) reportorial bias that insult the intelligence of voters, while distorting and undermining the democratic process.

Who can forget the moment in the 2020 presidential debate when the supposedly even-handed moderator—Chris Wallace, then of Fox News—shut down discussion of the Hunter Biden laptop by Donald Trump?

Now that we know more of the contents of that laptop—and Wallace is, not inconsequentially, no longer with Fox News—it’s easy to see the disgraceful and onerous results of such real-time censorship on the life of our country today.

And that was far from the first instance. CNN’s Candy Crowley similarly intervened in favor of Barack Obama over Mitt Romney on the Benghazi issue during the presidential debate of 2012. Later, Crowley admitted Romney was “right in the main.”

Those two examples favored Democrats over Republicans but, in the grand tradition of “what goes around comes around,” it’s highly likely that the roles will reverse at some point.

The group that was formed back in 1987—the Commission on Presidential Debates—bipartisan (in a sense) though it may be, has been an obvious failure.

And not just presidential debates engender such problems. All levels do, high and low.

Not only that, debates within the parties themselves, primary debates, have been largely uninformative sideshows, also often dominated by reportorial bias.

So what to do?

The Epoch Times, in collaboration with the Nashville Republican Women and the Middle Tennessee Young Republicans, is trying an experiment, a beta test of a new approach to political debate, if you will.

We are hosting a Republican primary debate in the Tennessee 5th Congressional  District without reporters.

Replacing the reporters will be domain (subject matter) experts in key areas of interest to voters—health, immigration, the economy, and so forth. These experts—not journalists—will ask the questions of the candidates.

The experts will be encouraged to ask probing follow-up questions to the candidates’ responses in a way that reporters, without serious domain knowledge, could not.

We realize, of course, that experts are human and will have prejudices of their own, but we are hoping their allegiance to the truth of their subjects will prevail over bias.

Further, we aren’t encouraging “gotcha” questions. The object here is not to embarrass the candidates or catch them in a gaffe, but actually to clarify where they stand on the important issues of our time, to give a better idea of what they might do if they were to win the office.

This doesn’t mean they can’t disagree with each other. They can and should. But their disagreements should be based on the specific issue at hand and be substantive, not personal.

Participating in the event will be four or five of the leading candidates (to be announced) who are on the Republican primary ballot in the Tennessee 5th District race. That’s the southern portion of Davidson County (contiguous with Nashville), portions of Wilson and Williamson counties, and the entirety of Maury, Lewis, and Marshall counties.

Regrettably, we can’t accommodate a greater number of candidates and still hope to achieve the kind of event we are attempting.

The debate will be held on July 12 at the magnificent Grand Lodge of Tennessee in downtown Nashville, with plenty of room for those who would like to attend in person. This is three days in advance of the beginning of early voting, with the primary itself on Aug. 4.

Tickets to the debate are now available at Eventbrite, ranging from free for general admission to $100 for VIP seats that include a post-debate reception, where you can meet the expert questioners and the candidates.

The event also will be streamed live by Epoch TV, starting at 6 p.m. local time. We encourage all to watch—even those far from Tennessee—because this is intended to be the first pass at an early form of “pilot” for possible debates to come across the nation. The format and style—indeed, everything about it—are open for discussion and suggestions, which are encouraged. We will be making plenty of mistakes. This is only the beginning, a first attempt, at a new approach.

But please, no adverse comments about the moderator. He will be yours truly and he promises to be the very soul of impartiality.