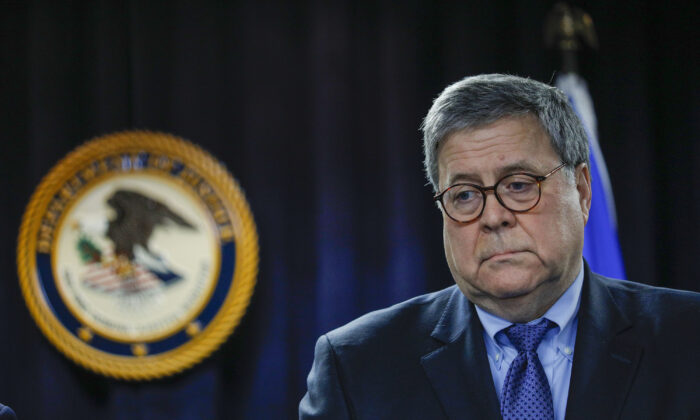 Former Attorney General William Barr recently made it clear that those who dismissed the Hunter Biden laptop story as Russian disinformation and suppressed the news will not be held accountable with any legal consequences.

“None that I can think of,” Barr said to Newsmax host Sean Spicer who raised the question regarding accountability. The former AG noted that media and politicians have a propensity for telling lies. Speaking in an interview with conservative radio show host Hugh Hewitt last month, Barr suggested that suppressing the laptop story might have affected the 2020 presidential elections.

“The intelligence officials suggesting that it was Russian disinformation in order to essentially keep a cork in it until after the election. I do think that that, given how close the election was, you know, I think that that probably affected the outcome, or at least is a very distinct probability of that,” Barr said.

Just weeks before the 2020 election, the New York Post published an article about a laptop dropped off at a Delaware repair shop in 2019 that is alleged to have belonged to Hunter Biden.

The article pointed to several emails and messages received and sent by Hunter Biden that triggered accusations that he leveraged his father’s influence as a former American vice president to secure lucrative business deals in Ukraine and China.

In recent months, media outlets like the Washington Post, Politico, and New York Times have published reports indicating that at least some of the contents on the laptop are authentic.

During the second presidential debate in October 2020, Joe Biden had blamed the story about his son’s laptop on a “Russian plot.” Barr recently stated that he was “very disturbed” when Biden lied about the issue to the American people.

The former attorney general also remained silent when Hunter Biden was put under investigation by federal authorities over tax issues before the 2020 presidential election. Former President Donald Trump had expressed disappointment at Barr’s decision, insisting that his silence had resulted in a disadvantage for the Republican Party at the polls.

Entrepreneur Elon Musk, who is taking over Twitter in a $44 billion deal, has criticized the censorship by the platform. “Suspending the Twitter account of a major news organization for publishing a truthful story was obviously incredibly inappropriate,” he said in an April 27 tweet.

“The worst cases of censorship involved platforms targeting anyone who dared to speak about any subject related to the New York Post bombshell Hunter Biden story,” the watchdog said. Of the 646 cases, 140 were about the New York Post’s articles on Hunter Biden and his alleged corrupt foreign business dealings.