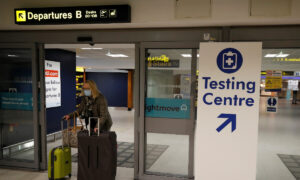 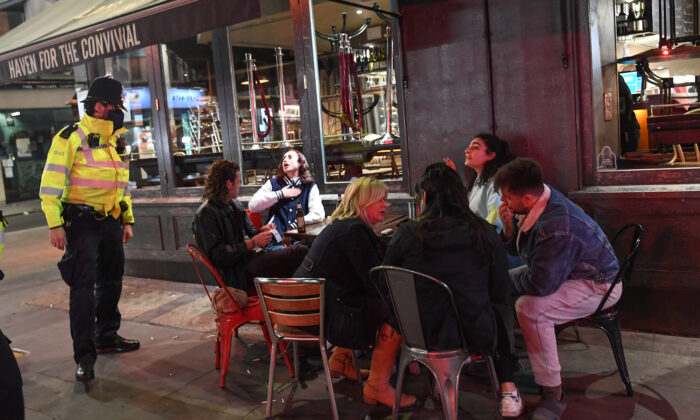 A police officer speaks to people sitting outside a pub in Soho in London, England, on Sept. 24, 2020. (Peter Summers/Getty Images)
UK

A cross-party group of British lawmakers said on Saturday that they are “entirely unconvinced” that COVID-19 certification should be introduced for domestic use, and urged the government to scrap the plan.

The UK government began a review in March on the idea of introducing “COVID-status certification” to decide if it is an appropriate tool to help reopen the economy.

But in its latest report, the Public Administration and Constitutional Affairs Committee (PACAC) in the House of Commons said that the government “has so far failed to make the scientific case in favour of the system” and its decision-making on the issue has been “largely arbitrary.”

William Wragg, a Conservative MP who chairs the committee, said “COVID passports are not the answer” as the government formulates a safe way to end the CCP (Chinese Communist Party) virus lockdown.

“We are entirely unconvinced by the case for their introduction. Although it is a tool that is being sold as and built with the intention of being for the universal good, it has the potential to cause great damage socially and economically.

“As vaccine uptake statistics indicate, any COVID certification system will be a discriminator along the lines of race, religion, and age,” he said.

The report stressed that many social groupings “could be excluded from participation in parts of the economy and society as it reopens under a certification system.”

Wragg also questioned the value of the planned certification regime. In view of the government’s much-touted “success” of the vaccine roll-out, he said, the system “would be established at great cost for rapidly diminishing returns.”

“Frankly, the government needs to scrap any idea of introducing COVID passports. They are unnecessary and there is no justification for them in the science and none in logic,” he said.

The MPs’ report also expressed concerns over privacy and data protection issues that may arise if the certification system is adopted.

“Witnesses to the inquiry told the Committee that not only would the database carry sensitive personal information linked to medical records but it could also be open to hacking,” the report said.

The report also suggested the government may have acted in contempt of Parliament when it agreed to a COVID-19 certificate for international travel.

Health ministers from G7 countries last week agreed on the need to work together to develop “mutual recognition of testing and vaccination certificates across countries.”

But the committee said launching a COVID-status certificate for international travel without notifying or consulting Parliament “could be construed as contempt of Parliament and this committee.”

Cabinet office minister, Michael Gove, who is leading the review previously said the benefits of a vaccine passports scheme were “finely balanced.”

A government spokesman said a review of the evidence around COVID-19 certification was still ongoing.