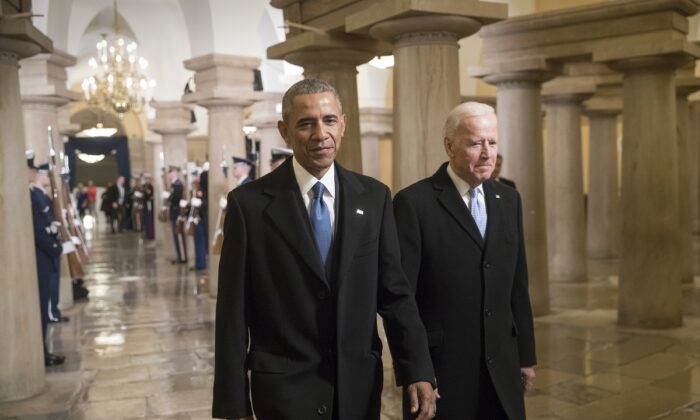 No Holds Barred: Barr, Durham Must Investigate Obama and Biden Too

Roughly a week ago, Attorney General William Barr made two noteworthy comments in an interview with Fox’s Maria Bartiromo.

The first was that we would likely learn some significant information from U.S. Attorney John Durham’s investigation into the provenance and conduct of the Russia probe by the end of summer.

The implication was that some people were going to be in legal jeopardy. Barr didn’t name them, but we can imagine Messrs. Brennan, Comey, Clapper, Strzok, McCabe, and others could be among them.

It’s also noteworthy how these same individuals have suddenly been less in the public eye, not appearing ad nauseam on MSNBC and CNN and sparing us their tweets (mostly), perhaps on advice of counsel.

All to the good. May justice finally be served.

One can imagine his reasons. The attorney general has long said he wants to take the politics out of justice, and he could fear, with some justification, that indicting (or doing something similar to) Obama and/or Biden would divide a country already riven as never since the Civil War.

Of course, that didn’t stop the other side that investigated, and continues to investigate, President Donald Trump until the proverbial cows come home, but, as Gandhi famously told us, an eye for an eye has got to stop somewhere.

Nevertheless, something is wrong here, increasingly wrong as we were reminded just the other day by the release of yet another heretofore “lost” (or was it missing?) page of notes—riddled with redactions, needless to say—from the Department of Justice, this one the scribblings of disgraced FBI Lothario Peter Strzok himself.

Strzok was reporting on what he heard of the January 2017 Oval Office meeting with the then-president and vice president, James Comey (then-director of the FBI), and that woman of preternatural loyalty, Susan Rice.

Obama, Rice informs us ad infinitum in an email she suddenly saw fit to send to herself weeks later, insisted that the investigation of Flynn be conducted “by the book.”

Strangely, however, Strzok quotes the president—yes, it’s secondhand—as saying he wanted the “right people” to conduct the investigation.

En anglais, that’s significantly different from “by the book.” In the same notes, Strzok writes there was “no derogatory” evidence that Flynn committed a crime and that Comey indicated the phone calls to Kislyak “appear legit.”

Nevertheless, as we know, the investigation went on. And on. Obama must have gotten the “right people.”

As for his sidekick Mr. Biden, he apparently urged Flynn be investigated for breaking the Logan Act, that obscure hundreds-year-old law that’s never utilized and many think is unconstitutional—not that that would have particularly bothered the vice president, who is known to have plagiarized in law school.

The impetus of much of this back and forth reported by Strzok, which I tend to believe all the more since it was hidden from the public for so long, was Obama’s deep hatred of Flynn. He was the enemy of the former president’s sainted Iran deal, among other putative sins, making him the equivalent in Obama’s eyes, as he told Trump, of Kim Jung Un.

Talk about motivation for a crime.

Okay, none of this is necessarily probative, but it’s far more than what we are told launched the entire Russia probe in the first place, a vague and innocuous conversation between retired Australian politician Alexander Downer and Trump campaign outlier George Papadopoulos.

Which brings us back to the attorney general and his responsibility. Barr must know that without a full investigation that includes Obama and Biden, this incredible story of possible treason will never be put to rest.

If Obama is to skate, if this all wasn’t at heart and at base Obamagate, as many call it, then Obama must be fully exonerated by Barr and Durham. They must explain to us how this could have happened without him.

Otherwise, they won’t only have launched a thousand books, now into infinity, they will have launched an equal number of conspiracy theories, at least one of which will be more than a theory.

And they will have split the country in a deeper, more enduring way by obviating the rule of law in the process. It will never be the same.

I sympathize with Barr, who seems to me in many ways a remarkable man. He now has his greatest challenge. I fervently hope he doesn’t let us down.

Roger L. Simon is an award-winning author, Oscar-nominated screenwriter, and the co-founder of PJ Media. His most recent books are “I Know Best: How Moral Narcissism Is Destroying Our Republic, If It Hasn’t Already” (non-fiction) and “The GOAT” (fiction).