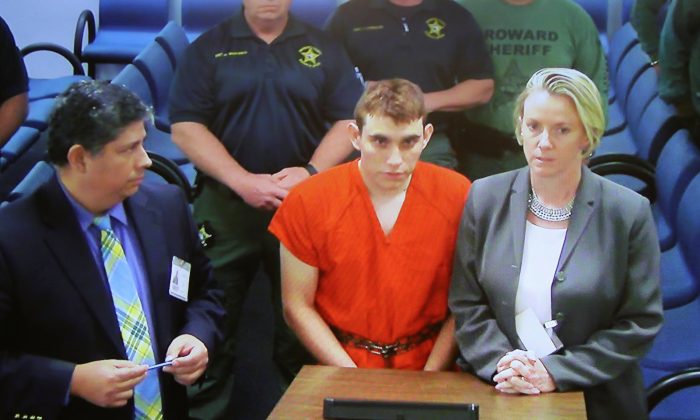 Nikolas Cruz (C) appears via video monitor with Melisa McNeill (R), his public defender, at a bond court hearing after being charged with 17 counts of premeditated murder, in Fort Lauderdale, Florida on Feb. 15, 2018. (REUTERS/Susan Stocker/Pool)
Crime and Incidents

After Numerous Media Reports, No Evidence That Alleged Florida Shooter Is a White Supremacist

Nikolas Cruz, the alleged Florida shooter, doesn’t appear to be linked to a white supremacist group after all, despite numerous media reports claiming he was.

According to police, Cruz was the shooter that gunned down 17 teachers and students at Marjory Stoneman High School in Parkland on Feb. 14.

However, just hours later, users of an obscure forum claimed to have fed reporters false information, and law enforcement officials also said they found no evidence of a link.

After encountering the information on 4Chan, the Anti-Defamation League contacted a man they believed to be the leader of ROF, who said Cruz had ties to the group.

Despite the scant original evidence, many media outlets reported the alleged link.

A man calling himself Jordan Jereb, who the ADL said is “believed to be the leader of ROF,” told the Anti-Defamation League on Thursday that Cruz had participated in training exercises with the group, but emphasized the group had nothing to do with the shooting.

Multiple outlets such as the Huffington Post, ABC News, and The Associated Press reported the link, with no other evidence supporting the claim.

The reports came even as law enforcement officials emphasized that they had found no evidence linking Cruz to the Republic of Florida or any other groups.

Users of 4Chan emerged claiming that they were behind the stories, even posting screenshots of conversations that appeared to happen between a user and an ABC News reporter.

The ABC News reporter asks for evidence that Cruz was linked to the Republic of Florida, but all the user responds with is that it was “common knowledge.”

No, the Florida school shooter was *not* a member of any white nationalist groups.

Some lulz retards on Discord/4Chan thought it would hilarious to "prank" the ADL and media with this story & the RoF leader was dumb enough to play along with it. pic.twitter.com/sEvXNGuNjI

welcome to the future. pic.twitter.com/rBj61SUZC8

Law enforcement officials stressed that no link has been found, though the investigation is ongoing.

“We are still doing some work but we have no known ties between the ROF, Jordan Jereb or the Broward shooter,” Lt. Grady Jordan told the Tallahassee Democrat.

It was also later pointed out that Jereb was labeled as a “publicity seeker” by the Southern Poverty Law Center.

“It may seem odd that Jereb would bring attention to his group by claiming a connection to Cruz, but Jereb has always been somewhat of a publicity seeker. In 2014, in fact, he wrote us to complain that we had not already listed ROF as a hate group,” the center said in a statement.

“In April 2017, Michael Tubbs, the leader of the Florida chapter of the League of the South, a well-known hate group, wrote that Jereb ‘never misses a photo op’ and called him ‘a nut job who should be avoided.'”

A user who identified himself as Jereb on Gab, a social media platform, later said that “There was a misunderstanding because we have MULTIPLE people named Nicholas in ROF,” reported the Huffington Post.