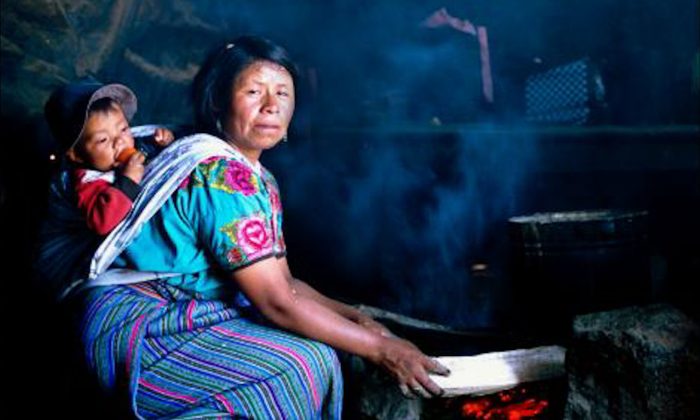 A woman in Guatemala cooks over an open fire with her child swaddled to her back. (Courtesy of Nigel Bruce)
Environment

The label is both pejorative and, in Wright’s case, inaccurate.

“Climate change is a real thing,” Wright told The Epoch Times at the National Conservatism Conference II in Orlando, Florida. “Humans have increased greenhouse gases in the atmosphere.”

Much of that rise stems from the combustion of coal, oil, and gas. As a result, Wright’s industry has been in the crosshairs of climate activists seeking to meet the Paris Agreement’s target of “well below” 3.6 degrees Fahrenheit, ideally 2.7 degrees Fahrenheit, of warming relative to pre-industrial temperatures.

Many parties at the recent COP26 climate conference in Glasgow, Scotland, have pledged to shift away from coal power, BBC News reported. In addition, a group of countries that includes the United States has reportedly committed to ending new, direct public financing for non-offset oil and gas beyond their borders by the end of 2022—a move that has been panned by some commentators.

“Note that the Netherlands is not ending fossil fuel use within the country. Neither is the UK. This policy is reserved for other (poor) countries,” Vijaya Ramachandran wrote on Twitter in response to a tweet from UK COP26 envoy John Murton.

Yet, even as some countries have made separate pledges to curtail fossil fuel investments, groups such as the Sierra Club and Greenpeace have criticized the first COP26 decision text draft for omitting specific mentions of oil, coal, and natural gas.

According to Wright, any attempt to examine fossil fuels’ current or prospective drawbacks needs to consider the industry’s benefits—including its potential benefits to the developing world.

In his remarks at NatCon, Wright warned that ongoing attempts to shift from oil, coal, and gas to renewables are “the largest politically driven misinvestment ever,” increasing energy costs while reducing reliability.

Wright argued that such efforts can also simply cause carbon-intensive industries such as manufacturing to relocate. He cited the UK, known for pursuing domestic emissions cuts, as it has become the G-7’s largest net importer of carbon dioxide emissions per capita.

With his environmental, social, and governance (ESG) report, “Bettering Human Lives (pdf),” Wright makes the case that energy provided by fossil fuels is vital to the well-being of humanity.

Traditional indoor cooking fuels such as wood and dung, still used by roughly a third of the world’s population, cause well over a million deaths per year, if not more, due to the particulate matter they produce.

Those deaths, Wright argued, could be largely ended through the use of liquid petroleum gas (LPG) stoves.

Although the economic effect of global warming is, in the Intergovernmental Panel on Climate Change’s (IPCC’s) own words, “difficult to estimate,” Wright drew attention to that organization’s reported (pdf) estimate that 0.2–2 percent of per capita income could be lost due to roughly 3.6 degrees Fahrenheit of warming by the final decades of the 21st century.

Yet those costs can’t be considered in a vacuum. Wright argues that they must be weighed against the increased costs of energy associated with the transition away from fossil fuels, especially for the working class or poor.

“If you’re an advertising exec or an environmental advocate or a lawyer, your utility bill’s going up 30 or 40 percent doesn’t impact your lifestyle. If you’re a single mom working on a farm or working at Walmart, the price of energy massively impacts your life,” Wright said.

Wright told The Epoch Times that, contrary to some reporting, the IPCC’s latest report is “not too far from sober.”

He pointed out that it describes the high-emission representative concentration pathway (RCP) scenario RCP8.5, the report’s worst-case scenario, as unlikely.

More specifically, the IPCC states in its 2021 report (pdf) that “the likelihood of high emission scenarios such as RCP8.5 … is considered low in light of recent developments in the energy sector.”

Asked about the feasibility of a carbon tax, Wright told The Epoch Times that it’s hard to get “a reasonable estimate of the externality—the damage that is imposed on everyone else from an additional molecule of carbon dioxide in the atmosphere.”

“The appropriate value of a carbon tax is probably around zero,” Wright argued. “By far the most visible impact of climate change so far has been a greening of the earth.”

“If we make energy prices more expensive, and that approach is a cost of a dollar on everyone, and society as a whole gets a dime’s worth of benefit, why is that a good idea?”

Wright also commented on nuclear energy, a low-carbon alternative to fossil fuels that is getting a second look at COP26, despite longstanding opposition from many environmentalists.

Representatives of the United States, Russia, Brazil, and other nations discussed their commitment to increased reliance on nuclear power at COP26, while China has announced that it intends to build 150 new nuclear plants over the next 15 years.

“I’m a big fan of nuclear power,” Wright said. “It is the smallest environmental-impact way to produce energy.”

“It’s had fear and political regulation problems that have jacked its price way up. It need not be that expensive,” he added. “The overall safety record, even including Chernobyl, Fukushima, and Three Mile Island, is No. 1.”

Yet, Wright pointed out that the electricity grids that might use nuclear energy account for just a fraction of total energy usage.

In Wright’s view, there’s “no chance” that the world could reach “net zero,” meaning that all greenhouse gas emissions released are balanced by an equal amount being taken out of the atmosphere, by 2050.

“I don’t take any of these pledges seriously,” he later added. “There’s no enforcement mechanism.”