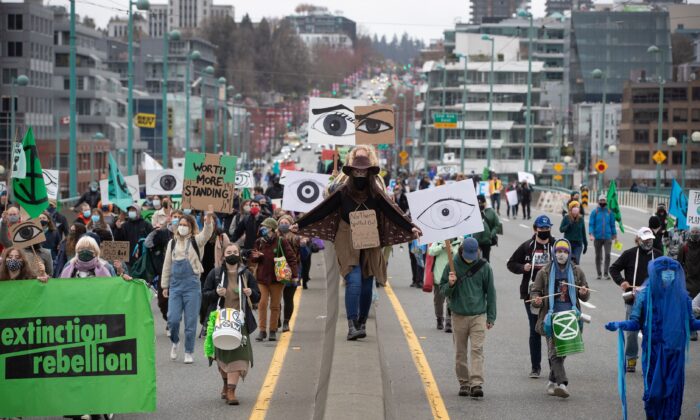 People taking part in a protest against old-growth logging march along Cambie Street Bridge in Vancouver on March 27, 2021. (The Canadian Press/Darryl Dyck)
Canada

VANCOUVER—Police are continuing to investigate possible vandalism and mischief charges after manure was dumped in front of B.C. Premier John Horgan’s constituency office on May 25.

Staff Sergeant Beardsmore with the West Shore RCMP detachment, which is investigating the incident, confirmed to The Epoch Times that his detachment has a file open, but so far no charges have been laid or arrests made.

“We’d certainly be interested in speaking to anybody that was involved,” he said.

The Save Old Growth activist group took credit for the dump, and The Epoch Times learned that one of its members allegedly involved in the incident may turn herself in. Beardsmore said he is not aware who that might be.

“I don’t know who it is that you’re talking to, and I’m not asking you, obviously, to tell me that, but if they do come to turn themselves in as it were, we certainly would have a conversation with them about that.”

In September 2020, the Ministry of Forests released its Old-Growth Strategic Review, which made 14 recommendations to protect old-growth forests, including nine areas throughout the province totalling almost 353,000 hectares.

The changes were to be implemented within a three-year time frame. However, in March of this year a report card released by environmental groups and some First Nations criticized the government for being slow to deliver the “fundamental change it promised in the wake of the old-growth panel’s report and in the last provincial election.”

Save Old Growth has been engaging in an ongoing campaign to pressure the government to end all old-growth logging in B.C., saying Horgan hasn’t followed through on his promises.

In an interview, co-founder Zain Haq said that although his group doesn’t plan to escalate such acts as dumping manure, it could still happen.

“I mean, it’s possible that there’s going to be similar actions at the offices of other members of the cabinet, but at the moment I’m not aware of any plans to do that,” he said. “It’s very much a possibility that someone can decide to just throw manure, and then we’d support that person through that process.”

Haq said one of his colleagues involved in the manure dumping incident at Horgan’s office told him she may approach police to discuss her part in it.

“I do believe that one of the people who did it plans on turning themselves in to the police in a few days from now,” he said.

The Epoch Times reached out to Horgan’s office for comment but did not receive a response by press time.

B.C. Public Safety Minister Mike Farnworth issued a statement to Chek News in Victoria, saying, “Peaceful protest is part of our democratic society. On the other hand, vandalizing property, preventing people from accessing services, and harassing local businesses is deplorable behavior. For those who employ these reprehensible tactics, I can assure you that you achieve nothing but increasing the frustration of the local community.”

Save Old Growth has launched a number of protest actions in recent months, including blocking major highways in B.C. during rush hour, as well as staging hunger strikes in an effort to have a public meeting with Katrine Conroy, minister of forests, lands, natural resource operations and rural development.

Haq agrees protests which disrupt communities initially can create negative pushback. But his group’s philosophy is this usually changes to support once the message reaches the people who are inconvenienced by the protests.

Beginning June 13, Save Old Growth plans to resurrect blocking traffic again after a recent pause to their protests. And these new attempts, Haq said, will cause more chaos as the group aims to maintain the blockades longer than two or three hours they’ve become known for.

“We don’t plan on doing action in the same way we were doing last time around,” he said. “We plan on doing permanent occupation of sites throughout B.C. We’re talking about highways and ports and other infrastructure. If people don’t like our tactics, then the unfortunate reality is that our tactics are the only way.”