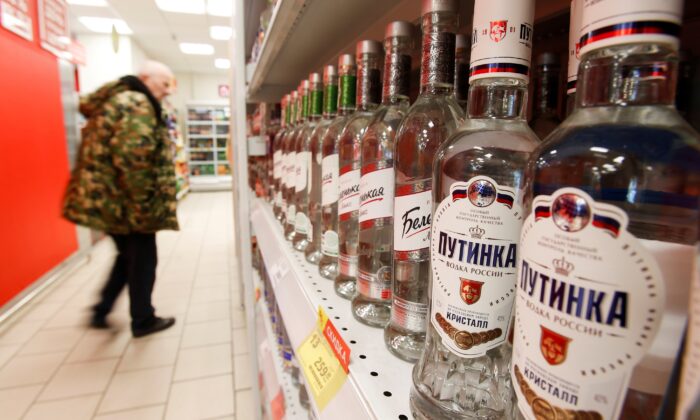 A customer walks past shelves with bottles of vodka in a supermarket amid the COVID-19 pandemic in Moscow, Russia, on April 8, 2020. (Maxim Shemetov/Reurers)
Health News

No Amount of Alcohol Consumption Is Good for the Heart: Report

Any amount can increase risk of cardiovascular disease
By Katabella Roberts

No amount of alcohol consumption—not even a moderate amount—is good for the heart, the World Heart Federation (WHF) said on Thursday.

In a new policy brief titled “The Impact of Alcohol Consumption on Cardiovascular Health: Myths and Measures,” WHF is pushing back on the widespread belief that drinking a daily glass of wine may be beneficial.

The non-governmental organization, which is based in Geneva, Switzerland, is calling for urgent action to be taken to tackle what it says is the “unprecedented rise in alcohol-related death and disability worldwide.”

In 2019, there were more than 2.4 million deaths as a result of alcohol, WHF said, which accounts for 4.3 percent of all deaths globally and 12.6 percent of deaths in men aged 15 to 49. In that same year, more than 92 million DALYs (Disability-adjusted life years) were caused due to alcohol in the same year.

“The evidence is clear: any level of alcohol consumption can lead to loss of healthy life,” the organization said. “Studies have shown that even small amounts of alcohol can increase a person’s risk of cardiovascular disease, including coronary disease, stroke, heart failure, hypertensive heart disease, cardiomyopathy, atrial fibrillation, and aneurysm.

“Studies that claim otherwise are based on purely observational research, which fails to account for other factors, such as pre-existing conditions and a history of alcoholism in those considered to be ‘abstinent,'” WHF continued. “To date, no reliable correlation has been found between moderate alcohol consumption and a lower risk of heart disease.”

As well as the reported health risks associated with drinking any amount of alcohol, WHF, which is working with the World Health Organization (WHO), also warned of the high economic and social costs it can have.

This includes financial costs to the health system, productivity loss, an increased risk of violence, homelessness, and criminal activity, among others.

“Beyond the direct consequences on the health of the drinker, the use of alcohol is responsible for a significant societal impact and is linked with motor vehicle accidents, injuries, familial discord, and burden on a country’s criminal justice system, among other negative outcomes,” WHF said. “Children with parents who suffer from alcohol addiction have also been shown to exhibit higher rates of alcoholism in their life span.”

The World Health Organization has also called for a 10 percent relative reduction in the per capita use of alcohol between 2013–2030 but says that the lack of investment in proven alcohol control strategies, as well as misinformation from the alcohol industry, has hindered progress toward that goal.

“The portrayal of alcohol as necessary for a vibrant social life has diverted attention from the harms of alcohol use, as have the frequent and widely publicized claims that moderate drinking, such as a glass of red wine a day, can offer protection against cardiovascular disease,” said Monika Arora, Member of the WHF Advocacy Committee and co-author of the brief. “These claims are at best misinformed and at worst an attempt by the alcohol industry to mislead the public about the danger of their product.”

However, not everyone agreed with the WHF’s stance on alcohol consumption.

David Spiegelhalter, the Winton Professor for the Public Understanding of Risk at the University of Cambridge, noted that one study on the risks of alcohol which was cited heavily by WHF in the brief had been misrepresented.

Spiegelhalter told CNN that WHF “seriously misrepresents, and selectively reports, their findings” on the study, which was published in The Lancet in 2018.

“Given that the WHF report references this paper, it is really odd that their conclusion is that ‘no amount of alcohol is good for the heart,'” Emmanuela Gakidou, a professor at the University of Washington’s Institute for Health Metrics and Evaluation, told CNN.

“There are some scientific studies that support their headline, but based on my work on the Global Burden of Disease Study, which pulls together all the available evidence to date, the claim by the WHF is not supported by the scientific evidence currently available,” Gakidou said.

Meanwhile, the American Heart Association says that “moderation is key” when it comes to alcohol, which is defined as roughly one to two drinks per day for men and one drink per day for women.