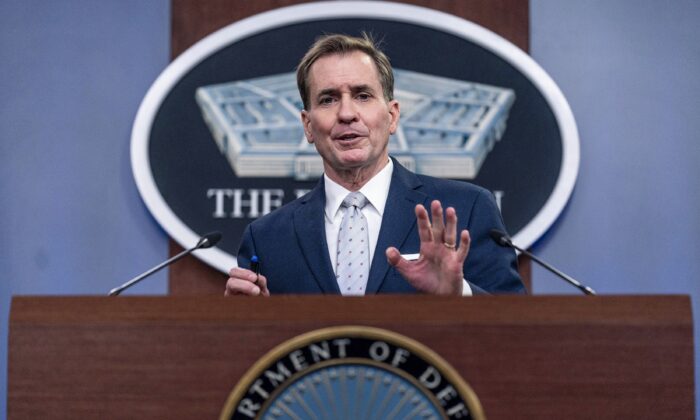 Pentagon spokesman John Kirby speaks during a briefing at the Pentagon in Washington on Aug. 25, 2021. (Andrew Harnik/AP Photo)
Afghanistan

No Americans Have Been Rescued Outside of Kabul: Pentagon

U.S. troops have not rescued any Americans in Afghanistan outside of Kabul, though they have the capability to do so, the Pentagon said Wednesday.

Only three rescue missions have been conducted by American soldiers since the Taliban took over the country, according to military officials. But all three took place within Kabul, Pentagon spokesman John Kirby told reporters in Washington.

“Could it be done outside Kabul, if needed? We have the capability,” he said.

The reason why that distance is so small is because the focus of the mission is on protecting the Hamid Karzai International Airport, where flights are departing regularly with Afghans, Americans, and others, Kirby said.

Asked if the United States could help an American couple who is reportedly in Mazar-e-Sharife, he answered bluntly, “No.”

So far, three missions have been conducted, including one to the Baron Hotel to rescue a group of 169 people who were struggling to make it to the airport. All three have been “a short duration and a short distance,” according to Kirby.

Approximately 1,500 Americans remain in Afghanistan, U.S. Secretary of State Antony Blinken announced shortly before Kirby answered questions from reporters. U.S. officials have repeatedly said that they expect to be able to evacuate every American who wants to leave the country by an Aug. 31 deadline that President Joe Biden imposed.

“We are currently on a pace to finish by Aug. 31,” Biden said on Tuesday.

The Taliban, which took over Afghanistan in mid-August, has challenged the United States to adhere to the deadline, warning of “consequences” if they do not.

Pressed during a meeting with business executives at the White House on Wednesday on what he would do if Americans are still in Afghanistan after the deadline, Biden initially did not speak before telling the reporter that he would “be the first person I call.”

The White House then ushered out reporters, marking another time where the president has refused to answer questions in recent days.

White House press secretary Jen Psaki later told a press conference that Biden received a briefing on the crisis on Wednesday morning, including contingency plans in the event the deadline ends up being pushed back.

“I will reiterate, as he stated yesterday, that this is all contingent on us achieving our objectives and our continued coordination with the Taliban,” she said.

While U.S. troops hold the airport in Kabul, the Taliban is, “whether we like it or not, largely in control of the country,” Blinken said.

The United States has been openly working together with the Taliban, which is designated as a terrorist group by multiple countries.

Taliban militants beat Americans in Kabul’s streets on multiple occasions, but the group has not faced repercussions from the United States as of yet, as the military races to complete evacuations by the deadline.

The harsh treatment has had at least one positive effect, Kirby acknowledged: the crowds trying to enter the airport have thinned out.