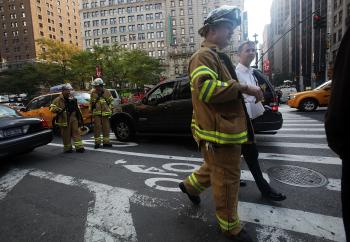 Firefighters walk near the scenes of a PATH commuter train accident Oct. 21, 2009 in New York City. The incident resulted in a few minor injuries. (Mario Tama/Getty Images)
US

By Jasper Fakkert
Print
NEW YORK—Around 425 people on board a PATH train from New Jersey came to a shaky stop after the train ran into an end-of-line bumper at New York’s Penn station on Wednesday morning.

Around 13 of the passengers have been injured. Jennifer Friedberg, spokesperson of the Port authority of New York, said that the injured passengers "have minor injuries."

Seven of the injured have been taken to the hospital. Two of the injured, an engineer and a conductor, are part of the train's crew.

According to Ms. Friedberg, there are "a ton of safety measures that should have prevented this accident from happening."

The cause for the accident is still being investigated.

The accident happened at around 8:15 am at Penn station in midtown Manhattan, one of New York City's busiest train and subway stations.