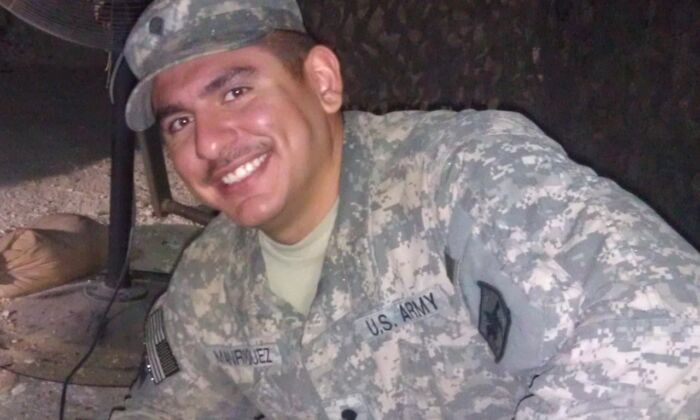 Jose Manriquez in uniform while serving in the U.S. Army National Guard. (Family photo)
US News

Jose Manriquez said he joined the Denver Police Department seven years ago because he wanted to help people.

The irony of his situation, Manriquez said, is that in 2020 he came down with COVID-19 and “nearly died.” He has since fully recovered.

“Why did I need this vaccine? I was active and fit,” he told The Epoch Times.

In spite of having natural immunity against the CCP virus, Manriquez said, the city told him he still needed to be vaccinated if he wanted to keep his job.

“I love being a cop and helping people. I don’t know what’s going to happen if I can’t go back to work,” he said. “I don’t want to quit my job and start over. It was either take the shot or get fired.”

The CCP (Chinese Communist Party) virus, commonly known as the novel coronavirus, is the pathogen which causes COVID-19.

The City of Denver reported there are 10,707 full-time employees—nearly 99 percent—who have complied with the vaccine mandate, including more than 98 percent of 1,760 police officers and personnel.

Nearly 800 exemption requests were submitted with 652 approved and 71 denied, the city reported.

Manriquez said he received his first Pfizer shot on Aug. 22.

Later in the day, he began to feel extreme pain throughout his entire body.

“No shot I ever got (in the military) hurt as much as this one. Nor did I get a reaction like this one,” he said.

“This shot hurt more than the anthrax (shot). I was taking Tylenol to try to tolerate it. I went into work and it really hurt.”

Manriquez said he was sent home from work after his legs “gave out” from under him and he fell. On the way home, things got really scary, he said.

First, his feet went numb. Then, he couldn’t feel the gas or brake pedals in his car.

He pulled over and called his duty officer.

“It was a weird feeling,” Manriquez said. “I was having all kinds of weird sensations—tingling sensations to no feeling at all—so I panicked.”

Manriquez said he drove himself the rest of the way home, but the pain in his knees felt as if they were “going to explode.”

The career officer is joined by eight other patrolmen in a legal challenge to the city’s public-health order that required 10 categories of employees to be fully vaccinated by Sept. 30.

The complaint alleges McDonald issued the public health order on Aug. 2 to mandate the “still experimental COVID inoculations on numerous personnel in Denver County” without having legal authority to do so.

On March 12, Colorado Gov. Jared Polis issued a statewide COVID emergency declaration that was rescinded on July 8. The emergency order serves as “legal basis” for the public health order mandating the COVID vaccines, the complaint alleges.

“Simply put, the Aug. 2 order is void because it is clearly beyond the scope of any authority properly invested in (Hancock and McDonald) through the state constitution “or any valid statute,” the complaint adds.

“It is tragic and inexplicable that a 7-day grant of statutory power by Mayor Hancock could evolve into an 18-month continuous state of emergency for the City and County of Denver, with no end in sight.”

“With caution thrown to the winds, everyone—the young and healthy, the old, the previously recovered and naturally immune, even pregnant and breastfeeding women—is currently being pressured by governments, businesses and educational institutions to submit to a COVID inoculation with no assessment of the risks or benefits for each individual or any consideration of medical necessity or contra-indication in each particular case.”

The plaintiffs have requested a judicial review of the public health order, a separate hearing challenging it, and a temporary halt to its implementation.

Denver attorney Randy Corporon is representing all nine officers in the case. He said the facts in the case are still being assessed to determine if monetary damages are warranted.

Regarding his client Jose Manriquez, Corporon said he continues to have trouble sleeping and walking—physical effects that can be attributed to the Pfizer shot.

Manriquez said he knows of at least two other Denver police officers who suffered adverse reactions to the COVID injections.

He said one officer was diagnosed with myocarditis, an inflammation of the heart muscle. The other reported excruciating pain after getting injected, like being “stung by multiple bees,” he said.

“After what’s going on, I refuse to get (the second shot),” Manriquez said. “My wife has been pretty strong about it. This is just another hurdle, (but) she’s scared.”