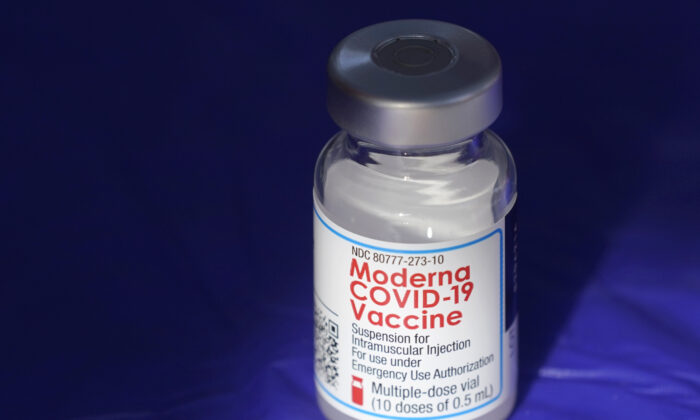 The National Institutes of Health (NIH) and Moderna are engaged in a dispute over which scientists developed Moderna’s COVID-19 vaccine, with the conflict possibly heading to court.

Moderna and government scientists collaborated on the development of the shot and the government asked the company to include a trio of scientists on its patent application. But company officials said in a patent filing in July for a key sequence that’s part of the vaccine that they “have reached a good-faith determination” that the scientists did not invent it.

The filing “took NIH officials by surprise,” a government official familiar with the situation told The Epoch Times in an email on condition of anonymity.

The agency disagrees and a review of the matter determined Drs. Kizzmekia Corbett, Barney Graham, and John Mascola, who all worked with Moderna while at the NIH, are co-inventors of the component and should be named as such.

“Omitting NIH inventors from the principal patent application deprives NIH of a co-ownership interest in that application and the patent that will eventually issue from it,” the official said.

The three scientists, only one of whom still works at NIH, did not respond to requests for comment.

Moderna said in a statement that NIH scientists did not co-invent the mRNA, or modified nucleotide, sequence used in the vaccine, alleging the scientists “were not even aware of the mRNA sequence until after the patent application had already been filed.”

“For those who would seek to twist Moderna’s good faith application of U.S. patent law into something else, nothing could be further from the truth. Moderna remains the only company to have pledged not to enforce its COVID-19 intellectual property during the pandemic. Moreover, on September 29th, Moderna offered to resolve its dispute with NIAID by making the government co-owners of those patent applications that only listed Moderna scientists as inventors, including the right as co-owners to license the patents as they see fit,” the company added.

NIAID is part of the NIH.

Negotiations on the matter have stretched back over a year, the government official said.

Dr. Francis Collins told Reuters this week that Moderna “has made a serious mistake here in not providing the kind of co-inventorship credit to people who played a major role in the development of the vaccine that they are now making a fair amount of money off of,” adding that “we did our best to try to resolve this amicably and ultimately failed.”

“But we are not done. Clearly, this is something that the legal authorities are going to have to figure out,” he added.

TJ Mantooth, a partner at Hall Estill specializing in patents, told The Epoch Times in an email that the patent dispute could be settled by a court through examining whether all the inventors of the component are credited in the application.

Moderna expects to make between $15 billion and $18 billion this year from its COVID-19 vaccine. Naming government scientists as co-inventors could have enormous financial and legal ramifications.

If done, the government could authorize outside manufacturers to use the technology that Moderna is attempting to patent, according to Peter Maybarduk, director of Public Citizen’s Access to Medicines Program.

That includes granting use to the United Nations-backed Medicines Patent Pool, which was recently allowed to distribute information on Merck’s COVID-19 pill to manufacturers in 105 countries.

“NIH-Moderna is the most effective COVID-19 vaccine in the world. We, the people, paid for its development. Federal scientists pioneered the understanding of coronaviruses and then worked in partnership with Moderna,” Maybarduk said in a statement. “But Moderna has turned this people’s vaccine into a rich people’s vaccine; refusing to share technology with WHO or developing country manufacturers and sharing very few doses with COVAX while overcharging poor nations.”

Stéphane Bancel, Moderna’s CEO, said in a note this week that the company plans to supply up to 500 million doses to COVAX, or the COVID-19 Vaccines Global Access. He also noted that the company pledged last year not to enforce COVID-19 related patents as long as the pandemic goes on.

“Moderna is grateful for our collaboration with NIH scientists, and highly value their contributions. We remain focused on working together with our collaborators to address the pandemic,” Moderna said.