NIH: Check Out Wikipedia to See Why Great Barrington Declaration is ‘Dangerous’ 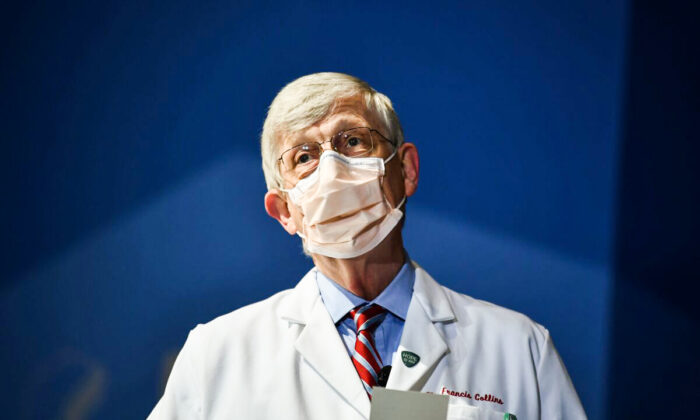 The National Institutes of Health (NIH) and its top officials are doubling down on criticism of the Great Barrington Declaration after emails showed they quickly moved last year to oppose it.

The declaration, penned last year, said lockdowns were producing negative short- and long-term effects on public health, such as lower childhood vaccination rates, fewer cancer screenings, and worsening mental health. The experts who signed on called for focusing COVID-19 prevention efforts on the most vulnerable, particularly the elderly, while loosening restrictions on the young and healthy, who are at little risk of developing severe COVID-19.

But top officials in the United States government were displeased with the declaration, which they felt wasn’t based on sound science. New emails obtained and published by the American Institute for Economic Research (AIER) and a congressional panel (pdf) show Dr. Francis Collins, who just stepped down as head of the NIH, directed a top subordinate, Dr. Anthony Fauci, to publish “a quick and devastating published takedown” of the declaration’s premises.

Fauci ended up going on television to criticize the declaration while Collins spoke publicly about his opposition to the Washington Post. Fauci also sent links to two op-eds he said “debunked” and served as a “refutation” of the approach promoted by the declaration, the 2020 emails show.

Some experts have said the messages from top health officials amount to unnecessary censorship. At the time Collins called for a takedown, no COVID-19 vaccines were available, and harsh restrictions had led to soaring unemployment, school closures, and businesses being forced to shut down.

“When it comes to lockdowns or school closures, the answer to the question of whether the benefits exceed the harms and, if so, under what conditions, is far from certain, and scientists will continue to study this for decades. As a good scientist, Collins should have recognized the massive uncertainty around these policies,” Dr. Vinay Prasad, an associate professor of epidemiology at the University of California, San Francisco, wrote in an op-ed.

The NIH and Collins are standing by the opposition to the Great Barrington Declaration.

On “Fox News Sunday” this month, Collins claimed again the trio of scientists “did not have the credentials to be making such a grand sweeping statement” and said that if the strategy outlined in the declaration were followed, “hundreds of thousands of people would have died.”

Collins, who was speaking as director of the NIH, did not cite any studies or research to back up his position.

Studies are mixed as to the benefit of lockdowns and over 800,000 Americans have died with COVID-19, according to the Centers for Disease Control and Prevention (CDC).

Bhattacharya wrote on Twitter that the strategy outlined in the declaration was mischaracterized by opponents and that any strategy would lead to the epidemic ending when a sufficient number of people have immunity, through COVID-19 recovery or vaccination.

“So the question is how to get through this terrible pandemic with the least harm, where the harms considered include all of public health, not just COVID. The GBD & focused protection of the vulnerable is a middle ground between lockdown & let-it-rip,” he said.

Supporters of the scientists note that Florida officials closely hewed to strategies outlined in the declaration and say the state successfully balanced protecting the elderly and avoiding crushing restrictions against most others after a brief lockdown.

Fauci did not respond to requests for comment submitted to the National Institute of Allergy and Infectious Diseases, the agency he heads.

An NIH spokeswoman told The Epoch Times in an email that Collins has spoken out against the declaration since October 2020, “saying it was dangerous and unsupported by scientific evidence.”

“The WHO and many others have said the same. Much of this is captured on Wikipedia with citations. I encourage you to check out the page with the citations,” she added.

“That’s a testament to the lack of science and the abundance of politics at the NIH right now. They’re using Wikipedia articles and New York Times and Vox and Wired Magazine op-eds to determine what are supposed to be scientific matters and shunning actual scientists who work on this,” Phillip Magness of AIER responded.

Magness, speaking to The Epoch Times, pointed to how Fauci, when messaging Collins, cited editorials rather than studies in scientific journals and how, shortly after, Fauci received an email containing more op-eds from a deputy, who indicated in the subject line that he’d spoken with Fauci about the articles before sending them over.

Among them were an op-ed and a competing declaration called the John Snow Memorandum signed by Dr. Rochelle Walensky, now the head of the CDC, and a slew of other experts who opposed the Great Barrington Declaration. Walensky and the others argued that lockdowns prevented some deaths from occurring and hospitals from being overwhelmed while acknowledging they led to secondary effects like harming economies and mental and physical health. They said policymakers should keep restrictions in place, at least for a while.