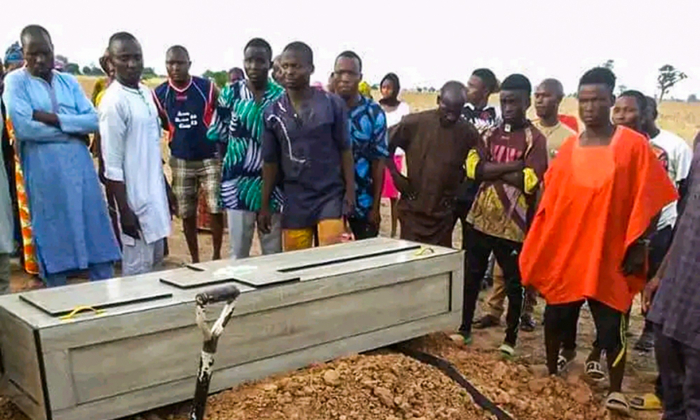 A solemn ceremony for Deborah Emmanuel near the family home in northeast Niger state on May 14. (Courtesy of Emmanuel family)
Africa

A so-called blasphemy killing of a female Christian student in Sokoto, Nigeria, on May 12 occurred as scores of armed, uniformed policemen failed to intervene, according to eyewitnesses who spoke to The Epoch Times.

At least 50 uniformed policemen, including six Department of State Security officers, were at the scene of the stoning death by Muslim students of 22-year-old Deborah Emmanuel, but none acted in her defense, according to a person who spoke on condition of anonymity over concerns of government retaliation.

Emmanuel’s father, Garba Emmanuel, was in Sokoto that day but didn’t witness his daughter’s death, according to Dr. Bola Adewara, a veteran journalist who interviewed the woman’s father for Elifeonline.

“The police were nearby, but they utterly failed to rescue the girl,” according to one of three uniformed members of the Department of State Security (DSS)—often compared to the FBI in the U.S.—who attempted to help the victim flee but were pushed back by the crowd.

Commissioner of Police Kamaldeen Okunlola disputed the reports, saying there were only “about 15 uniformed police there,” while acknowledging that many had rifles, in a telephone interview with The Epoch Times. Videos of the mob scene on the campus show more than 100 young men carrying sticks and shouting.

Deborah Emmanuel, who was accused by fellow Shehu Shagari College of Education students of blasphemy in a WhatsApp message on May 11, was swarmed by 180 protestors calling for her death.

The account of all media follows the narrative of Sokoto police who said, according to The Washington Post, “the school authorities quickly deployed security personnel to protect Emmanuel, but they were overpowered by angry youths.”

A far different account has been given by eyewitnesses. The DSS officer told The Epoch Times that school authorities were monitoring internet chatter by students who were planning to attack Emmanuel on the evening of May 11, but failed because she wasn’t in her student housing.

The witnesses say she called her father for help from her classroom on May 12 at 9 a.m. local time and told him that people were trying to kill her. Two classmates attempted to help her escape to a waiting taxi, but were pursued by a mob. She was locked in a gatehouse for her own protection by college security employees near the college’s entrance.

“Finally, the man with the key to the gatehouse arrived and let Deborah and her friend out, where four or five policemen met her,” according to a relative who stood near the locked gate of the college.

“However, the mob took her from the policemen and dragged her to the rear of the gatehouse where they beat her with sticks and then threw stones until she stopped moving,” the relative said.

“No policemen tried to stop the crowd,” he said.

“Some police outside the fence fired tear gas grenades to scatter the crowd,” one witness said.

Human rights advocates in the United States denounced the slaying as well as the alleged complicity of the Nigerian police.

“The police must have clear orders to intervene to stop any violence, including mob lynching such as this,” Nina Shea, a religious liberty specialist at The Hudson Institute, told The Epoch Times by text.

“They either lack such orders or even are instructed to stand down when violent Muslims attack defenseless Christians. This incident also underscores that Islamist extremism is rapidly spreading across northern Nigeria, despite the US State Department’s refusal to acknowledge this danger.”

According to multiple media reports, Emmanuel had gotten into a dispute with fellow students on a WhatsApp messaging channel created by the college after she complained that there were too many religious posts in a group intended for academic updates. When asked how she passed last semester’s examination, she replied “Jesus O.”

She also used the phrase “nonsense prophets,” which some students interpreted as a slight against the prophet Mohammed. Two Muslim students demanded that she apologize, but she refused and replied, “Holy Ghost fire! Nothing will happen to me.”

Shortly after 9 a.m. on May 12, two students brought some nonstudents to the college to threaten her. She called her father for help.

“Deborah was going to graduate in November with a degree in Home Economics. She was engaged to a young man and planned to marry, then start a catering business,” according to the relative who watched helplessly as she was stoned and beaten to death at the back of the gatehouse.

“Until now, even after four days, the family has received no message of apology from the college administration or from police who didn’t protect her and no offer of reimbursement for burial expenses or medical bills for her relatives who were injured,” the relative said.

“We believe the family cannot sue for damages. We decided to leave everything to God.”

The governor of Sokoto state and the sultan of Sokoto, the national Muslim religious leader, both denounced the killing and called for full prosecution of the criminals.

Two men were arrested on May 14, including one who is a student, according to the eyewitnesses.

“The horrible murder of Deborah Emmanuel over her beliefs is tragic and infuriating,” human rights activist Tina Ramirez told The Epoch Times in a message.

“That it coincides with the birthday of Leah Sharibu, kidnapped by Boko Haram four years ago, is a sober reminder of how far we still have to help local leaders learn to push back against the culture of violence and impunity.

“But horrendous cases such as these demonstrate the deep-seated and entrenched hatred we are up against.”