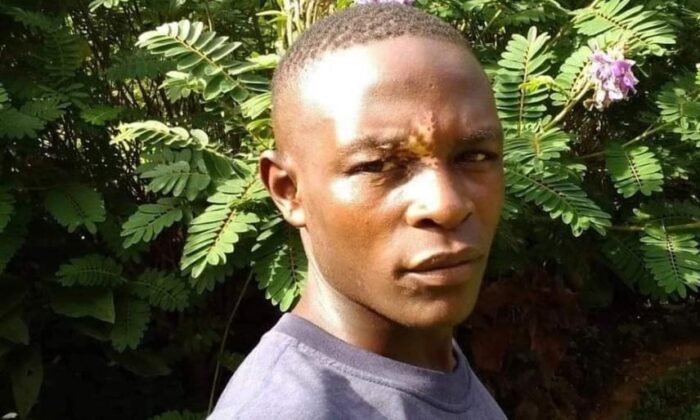 Reuben Sunday, killed by terrorists in Nkiedoro, Nigeria, on the anniversary of a massacre there in 2017. (Lawrence Zongo/The Epoch Times)
Africa

JOS, Nigeria—Before a celebration of conflict reporting could even begin, the tragedy of conflict intruded.

Unknown gunmen killed a man who has supported journalists in Nigeria, just hours before a press conference aimed at commemorating victims of a massacre and celebrating breakthroughs in coverage of the little-noticed war in the country against Christians.

Reuben Sunday, 28, was ferrying attendees on his motorcycle to the event when unknown terrorists sprayed him and his three passengers with automatic rifle fire. Killed along with Sunday were David Amos, 42, and his son Abednego Amos, 8, while 12-year-old Emma Amos is recovering in a hospital in Miango.

“He was ambushed while transporting the other victims to the conference venue,” said Lawrence Zongo, a freelance reporter who contributes to The Epoch Times. He appeared distraught throughout the press conference that he spearheaded.

“The victims were on their way to Nkiedoro village, and Reuben offered them a free ride. He could have been targeted for his role in exposing the activities of terrorists,” Zongo said.

“Reuben was my beloved brother in the struggle for justice for our people. He was a counselor and friend, my driver. He traveled with me to horrible places to reveal high-level terrorism by Fulani militants. He took many risks for me and my partners, not worrying about his life or family.”

The Fulani are a Muslim tribe that is accused of conducting a campaign against Christians in Nigeria.

The press conference on Oct. 16 was to commemorate the Oct. 15, 2017, massacre of 29 unarmed civilians in a classroom at a military-occupied elementary school in Nkiedoro village west of Jos, the capital of Plateau state.

At the same press event, Zongo presented a TV documentary that credited reports written for The Epoch Times by freelance conflict reporters for raising awareness about what some call a Christian genocide.

The day of Oct. 15, according to survivors, revives traumatizing memories of the 2017 murder of 29 defenseless women and children in full view of Nigerian soldiers who stood by and watched.

“No one has been held accountable for the murders,” according to war correspondent Lara Logan, who featured Zongo’s account in her Nigeria documentary for Fox Nation. Excerpts of the documentary are available on the YouTube channel of the International Committee on Nigeria.

The attack on Reuben Sunday and his three friends, the second in a week in the same district, is one more in a continuing series of violent acts, said Mallison Davidson, a spokesperson for a tribal association.

“Every day, we are faced with one attack or the other by the Fulani marauders. If it’s not destruction of ripe farm crops, it’s killing, or looting of household items,” Davidson told The Epoch Times.

“This is coming barely a week after we buried another three killed in this same district by the same terrorists, without any action by the government or its security forces.”

Armed attacks by Fulani terrorists in Plateau state over the past two decades have left close to 30,000 Christians dead, according to Solomon Maren, a representative in Nigeria’s national legislative body.

“The attacks happened even under the watch of a large military task force,“ Maren told The Epoch Times.

“Government’s failure to protect citizens is leading to calls for self-help,” he said. “It is becoming clearer that the people we thought would be there for us are either not ready, or they seem to have instructions from other quarters not to be there.

“As leaders, we must stand with the people and speak for the people. Unfortunately, very few leaders are willing and are ready to do that. This is very worrisome, but most importantly a call for us as citizens to heal ourselves, talk to ourselves, and help ourselves,” said Maren, who represents the Mangu/Bokkos constituency at the Nigerian House of Representatives.

Maren’s views are shared by other thought leaders, including former defense chief Gen. Theophilus Danjuma, who has urged citizens to take up arms and defend themselves against attacks.

“Buhari and … Lalong are to blame for the persisting attacks in the State,” Abs said in a goodwill message at the school shooting anniversary. “We can debate all day on who is to blame but let us be clear. There is an organized group that we term ‘Fulani militants’ who are well-equipped and orchestrated to carry out brutal attacks and commit genocide in strategic locations. They are to blame.

“Yet, despite not being able to directly implicate President Buhari or Governor Lalong, they are complicit, because they have failed to protect citizens nor have they brought a single perpetrator to book,” Abts said.

According to survivors, “Allahu Akbar” (Allah is greatest) chanting terrorists speaking Fulani dialect attacked Nkiedoro village with AK-47s and petrol bombs on Oct. 15, 2017, shooting and burning houses. Residents sought to flee until they were ushered by the military into a classroom in the Nkiedoro government primary school located on the outskirts of town, with a promise of protection.

“They seized our phones and asked us to go into the classroom,” said Adamu Wuh, who recalled sighting a soldier having a conversation with armed men in civilian clothes minutes before the shooting.

“Around 5:30 p.m., we heard gunshots. I was running behind some children who went and hid behind the school. I was going to do the same when one of the soldiers ordered me to go into the classroom. He asked me to hand him my phone, and I did. They locked the door behind me when I entered the classroom to join about 30 others already seated.

“When I entered, I did not sit like the others. I just wandered around in the classroom, restless,” Wuh told The Epoch Times. “I went to peep from the door to see if I could get an idea of what was happening, and I saw one of the soldiers talking with the Fulani and pointing to the classroom. I instantly rushed to open a window, but before I succeeded, the Fulani had opened the door and entered. I managed to jump out before they started shooting.”

The military was complicit during the attack, says Ezekiel Bini, president of the Irigwe Youth Movement.

“They betrayed us and failed us for no reason,” Bini said at the anniversary event.

“The Nigerian military promised them safety from the attackers. They were locked in the classroom and killed by Muslim Fulani terrorists. We can’t forget the memory of this injustice done to us.”