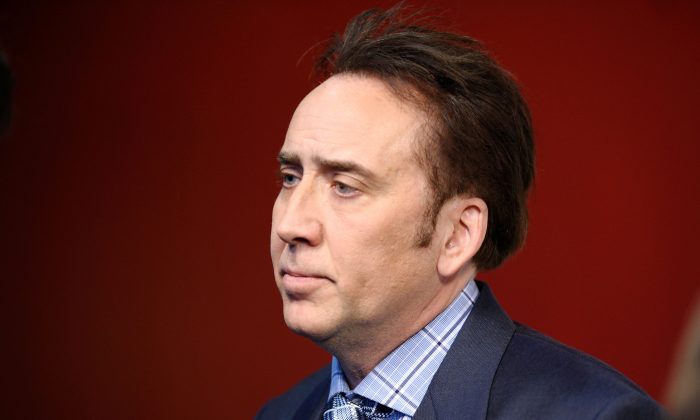 Nicolas Cage’s movie shoot was interrupted last week after a desperate parent got into the closed set and asked him to help find his missing child.

Cage, who was shooting “Dog Eat Dog” in Cleveland, was approached by Britt Ramsey, the stepfather of 15-year-old Alexis Boroviak. Boroviak disappeared more than two weeks ago and he asked Cage to take a picture with her “missing” poster.

The move was designed to shed more light on the missing case.

Ramsey told TMZ that he had to sneak onto the set with the help of a local community leader. He said it was worth the risk to raise awareness about Boroviak’s disappearance.

Boroviak disappeared from the front of her family’s home in Brooklyn, Ohio, on Sunday, Nov. 8. She has not been seen since she left her home, and thousands of people are now trying to find her, including Michelle Knight, Gina DeJesus and Amanda Berry–three women who spent a decade being held captive by a Cleveland man until they were finally freed.

The girl is 5 feet 3 and weighs around 155 pounds, and her hair is blonde and brown.

Ramsey and her mother Linda Chalfant said that if the girl simply ran away from home, she could return any time.

“Lexi, the doors are open and the lights are on,” Ramsey said, Cleveland.com reported. “We love you, and we’re not mad at you. We’ll work through anything, we’re family.”

He later added: “If somebody is holding Alexis, I’ve got news for you. … Let me tell you something about Clevelanders. We’ve got the Browns and we’ve got the Indians. We don’t give up. You’re barking up the wrong tree.